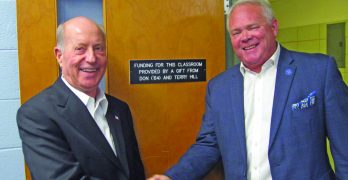 By Staff, Wildcats Media PINEVILLE, LA (LBM) -- An act of generosity that began with a $100 scholarship for one Baton Rouge teenager has multiplied many times over during the last 60 years to affect countless young people at Louisiana College. Don Hill, president of DMH & Associates, a company that provides consulting and marketing services to clients in the financial services industry, said that $100 was enough back in 1960 to tilt the scales for him, and he enrolled in Louisiana College to study math and business. As a high school senior, Hill was given a $100 scholarship to attend Louisiana College, and that settled his college decision. “My whole life has been God leading me,” he said. “Louisiana College was the right spot for me.” Since then, Hill, a 1964 summa cum laude LC graduate, with his wife Terry, have spent their lives giving back. The Hills have been providing scholarships for five LC students each year for several years now through the Board of Visitors Scholarship Fund started by the school’s president, Rick Brewer, in 2015. The Hills were founding members. They also have used various ways to give back to LC from cash donations--from donating appreciated stocks to making Qualified … END_OF_DOCUMENT_TOKEN_TO_BE_REPLACED 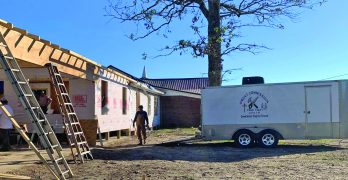 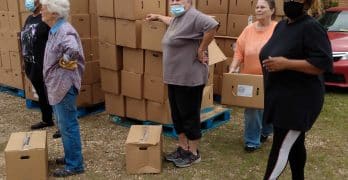 By Brian Blackwell, Message staff writer COTTON VALLEY, La. (LBM) – The 10 active members of Cornerstone Baptist Church were finalizing plans to close in late 2019, meeting with Webster-Claiborne Baptist Association Director of Missions Randy Hales to share their desire that the property would continue to be used for ministry after they disbanded. For several months the association, which was given ownership of the campus, resisted offers to sell the facility, believing God would provide a church to continue ministry efforts at the former Cornerstone Baptist site. Then in July, Unity Baptist Church in Cotton Valley approached Hales with the idea of using the assets as a community ministry hub. Two months later, the location was brought back to life. Since Unity Baptist launched the ministry center in September, they have hosted a prayer gathering, organized two food distribution events and invited an African-American congregation, formerly affiliated with the Methodist Church, to meet in the facility every Sunday. Gene Gibson, pastor of Unity Baptist, said the community of 1,000 has embraced the effort. “The community absolutely loves this,” he said. “They have stopped by the church office to ask when the next food … END_OF_DOCUMENT_TOKEN_TO_BE_REPLACED 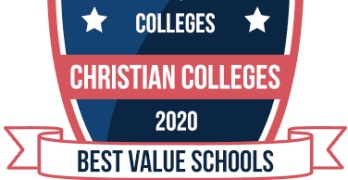 By Staff, Wildcats media PINEVILLE, La. (LBM) -- Louisiana College has been named a Top 30 Christian College by BestValueSchools.org, a research and resource group committed to helping prospective students and families find the best colleges and universities that meet their educational needs and maximize the student experience. Louisiana College President Rick Brewer said he is pleased for the college to be recognized nationally by BestValueSchools.org. “The Best Value School ranking validates the efforts of LC’s world-class faculty, students and staff,” he said. “We are grateful for this ranking as it demonstrates our commitment to Christ-centered academic excellence, our affordability, our diversity, and our unparalleled commitment to teaching." Brewer praised the faculty and staff for this prestigious ranking. “It is a privilege to serve alongside so many wonderful colleagues and to serve the student body of Louisiana College as we achieve our mission together of preparing graduates and delivering a transformational Christian higher education experience,” he said. BestValueSchools.org uses tuition costs, graduation rates, student-to-faculty rations, and other statistics from the U.S. Department of Education as … END_OF_DOCUMENT_TOKEN_TO_BE_REPLACED 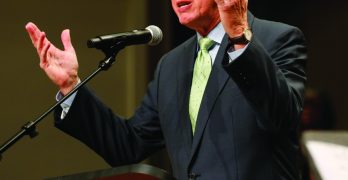 By Brian Blackwell, Message staff writer BOSSIER CITY, La. (LBM) – Pastors and congregation members will ask God to intervene for a nation facing uncertain times during the Northwest Louisiana Baptist Association’s sixth annual “Call to Prayer” Jan. 31, 6 p.m., at Airline Baptist Church, Bossier City. “Our churches will come together to ask God to create in me a clean heart, create in us a holy church, create in civil authorities righteousness and integrity, and create healing in those who are broken & hurting,” Director of Missions Lane Moore told the Baptist Message. Additionally, the Call to Prayer will include a special emphasis on health care workers. A nurse and physician from Willis-Knighton Health System in Shreveport/Bossier City will share words of appreciation to the association, and participants will have an opportunity to express their gratitude for the dedication and hard work of health care workers throughout COVID-19. While COVID-19 restrictions will prevent participants from gathering in small groups around the worship center, Moore said the spirit of prayer will be the same as previous Call to Prayer events. “We have so much to pray for in this current time in which we live,” Moore said. “Lord … END_OF_DOCUMENT_TOKEN_TO_BE_REPLACED 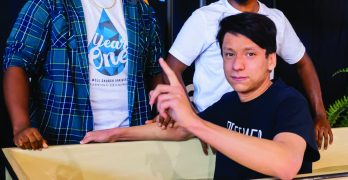 By Brian Blackwell, Message staff writer MONROE, La. (LBM) – Matthew Hurst was a long-time skeptic of Christianity with little desire to follow the ways of the Lord when he met his roommate, Jonathan Jenkins, in August. Soon afterward, the two University of Louisiana-Monroe students developed a friendship that God used to soften Hurst’s heart to the Gospel. Through a series of spiritual conversations, Jenkins, a member of the Well Church in Monroe, answered Hurst’s questions about Jesus, causing Hurst to become a fully devoted follower of Christ. Hurst, along with three other new converts, shared about their transformations during a special baptism/one-year anniversary service attended by 51 people at the Well Church Jan. 3. “Seeing Jonathan’s passion, strength and faith in Christ along with answering all the questions reopened my eyes,” Hurst told the Baptist Message. “It lit a fire in me, and I started reading the Bible every morning and became motivated to learn who God truly is. “It was actually a little nerve racking to be baptized because of everybody watching, but easy at the same time because they were all excited for me,” Hurst said. “All glory goes to God in that moment of going in the water and coming … END_OF_DOCUMENT_TOKEN_TO_BE_REPLACED

By Joe McKeever “‘…your ways are not my ways,’ saith the Lord.”  (Isaiah 55:8) Keep an eye on how the Lord works in your life. You might learn something useful for the next time He wants to use you. This little couplet seems to sum up 90 percent of what Scripture and life teach us concerning the operation … END_OF_DOCUMENT_TOKEN_TO_BE_REPLACED