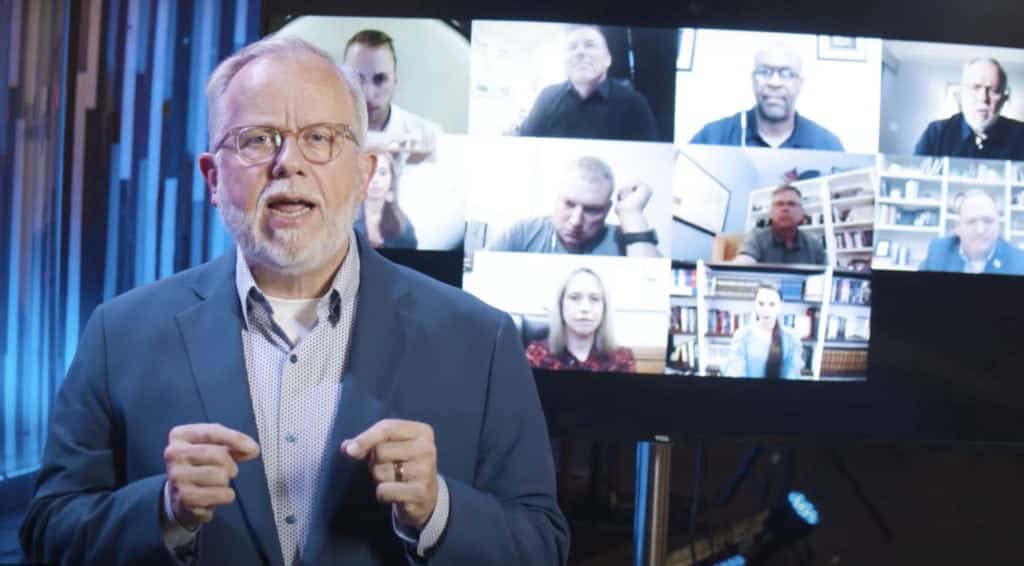 Litton released a video, July 20, featuring the task force that will investigate the SBC Executive Committee about mishandling sexual abuse allegations. He said Southern Baptists expect a "transparent and thorough" investigation and he asked for prayers for "truth." Baptist Press screen grab

WASHINGTON (LBM) – National media outlets such as the Washington Times and Newsweek have reported a plagiarism scandal involving Ed Litton, pastor of Redemption Church in Saraland, Alabama, and newly elected president of the Southern Baptist Convention.

Now, the Conservative Baptist Network, with a membership of 10,000 pastors and other church leaders, has issued a statement calling for Litton to resign.

The controversy erupted with an anonymous YouTube posting, June 24, of a comparison of sermons preached by Litton and J.D. Greear, pastor of The Summit Church in Raleigh, North Carolina, and immediate past SBC president. The video montage shows several segments where Litton repeats word-for-word from different portions of a sermon on Romans first preached by Greear.

Questions also have been raised about the theology presented in the sermons, which claim that God only “whispers” against sexual sin such as homosexuality.

The fallout has been broad, with other media outlets following up with subsequent reports of plagiarism by Litton.

Meanwhile, Newsweek reported, June 28, that “more than 140 videos were either unavailable or hidden across several playlists on the Redemption Church YouTube page” after Litton “came under fire.”

Redemption Church released a statement, June 28, to Baptist Press, explaining that “we have taken down sermon series prior to 2020 because people were going through sermons in an attempt to discredit and malign our pastor.”

Greear released a statement detailing that Litton had requested to use the sermon and had been given permission. Greear also explained away similarities of a personal missionary anecdote he used in the sermon that seemed to mimic a personal missionary anecdote by Paul Tripp, a “pastor, event speaker, and a best-selling and award-winning author,” according to www.paultripp.com.

Greear also shared that he had borrowed the “whispers” concept from one of his “favorite Bible teachers,” Jen Wilken, and that “She was quoting from the late RC Sproul in his book What’s In the Bible?, co-authored with Robert Wolgemuth, in their chapter on creation.”

For his part, Litton issued a statement, dated “yesterday,” explaining that he decided to use Greear’s work after consulting with his eight-man sermon preparation team.

“In that process, I learned about my friend J.D. Greear’s messages on Romans and discovered what he had recently preached resonated with the direction God was leading me and our preaching team. We often consulted his manuscripts along with other resources as we prepared,” he wrote.

“With his permission, I borrowed some of his insights” as well as “three closing points,” he stated. He also said the missionary anecdote he used was not Greear’s, but Tripp’s from “his devotional New Morning Mercies on January 22nd. His story took place in India.”

The Conservative Baptist Network, which describes itself as a “broad-based grassroots movement of Southern Baptists of all generations who are committed to the sufficiency of Scripture,” issued a statement, July 20, calling the “repeated plagiarism of multiple sources” by Litton “sinful behavior.”

“The Conservative Baptist Network delayed commenting on this matter publicly in the hope that personal conversations and counsel with President Litton would lead him to acknowledge his error and repent” the statement reads. “Sadly, this has not occurred.”

The group called for “the leaders of the SBC to address this matter promptly and biblically” and for Litton “to step down from office and focus on his personal spiritual development with his local church.”

By Mark Devine As the dust settles from the annual meetings of two major evangelical denominations, the contrast between them could hardly be more stark. Courage won the day among those gathered for the PCA. Fears of elitists won out among the messengers to the SBC. ... READ MORE … END_OF_DOCUMENT_TOKEN_TO_BE_REPLACED