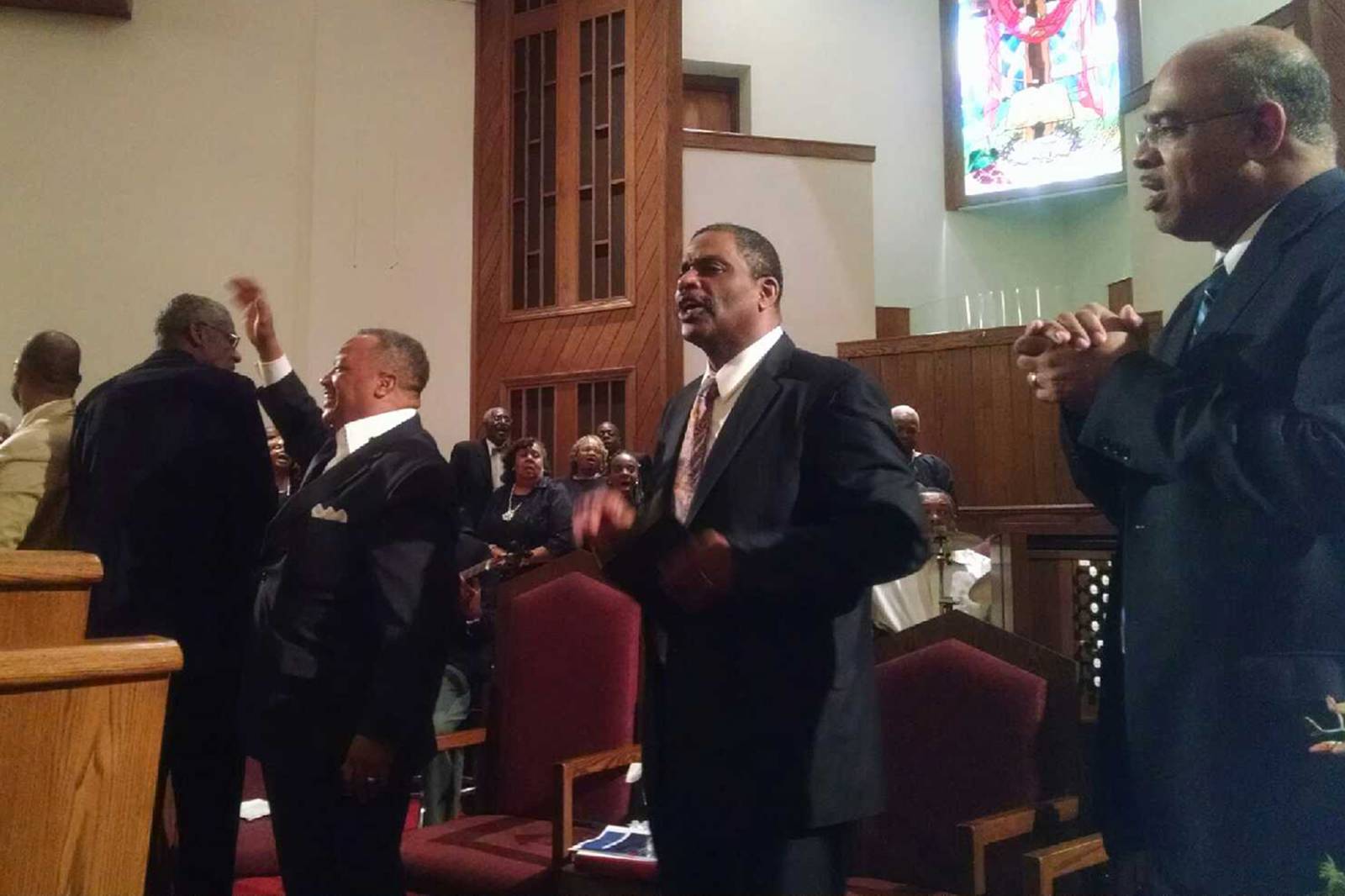 PHILADELPHIA (BP) — Christians can lead holy lives by the same power the Apostle Paul called on in his struggle between the flesh and the Spirit recorded in Romans 7, immediate past Southern Baptist Convention President Fred Luter told worshippers at a Philadelphia gathering of black Southern Baptist pastors and leaders.

Luter’s sermon, “The Super Bowl for Your Soul,” capped presentations by seven other pastors and denominational leaders at the event hosted by NAAF president and Nazarene Baptist Church Pastor K. Marshall Williams Sept. 29–30 at the church in the historic Germantown community. “Living Holy and Clean in 2015: What shall we say to these things?” was the symposium theme.

Luter stood on Romans 7:15-25, likening Paul’s struggle and that of other believers to the Super Bowl, urging Christians to read their playbook the Bible and follow its rules.

The worship service was multi-ethnic, incorporating a solo by Valery Dimov of Ukranian Baptist Church in Philadelphia; the Haitian Evangelical Baptist Church Choir which sang selections in French; and the Nazarene Baptist Church Mass Choir, which included Negro spirituals in its repertoire.

Luter, pastor of Franklin Avenue Baptist Church in New Orleans, encouraged pastors to call on him in his new concurrent role as national African American presidential ambassador of the North American Mission Board and the upcoming “Catch the Vision” tour scheduled in 2016. Luter, who made national headlines as the first African American elected SBC president, is working to increase the number of African American Southern Baptist congregations, which currently number about 3,500 churches and church-type missions.

Symposium seminars focused on pastoral encouragement; personal holiness, revival and spiritual awakening; marriage and the family; racial reconciliation, and the “pipeline” from school to prison.

From pastor to pastor

Croston pointed out the major struggles the majority of pastors face, including being overworked and underpaid, feeling underprepared, inordinate family and marital stress, loneliness, depression and a desire to leave the ministry.

He encouraged pastors to build support systems through a diversity of friendships including a loyal best friend, a fearless adventurer, a brutally honest confidant, a wise mentor, a friend from a different culture, a polar opposite — such as the Apostle Paul’s friendship with the runaway slave Onesimus, a friendly neighbor, and a pal at work or in the same profession.

Croston exhorted pastors to keep their spiritual lives fresh, reassess personal and ministry goals, reassess their lists of friends, to take regular time off, get proper exercise and sleep, join or start a small accountability group, and find ways to laugh and have fun.

Gary Frost, president of NAMB’s Midwest region, spoke on “Personal preparation for a sovereign visitation,” based on 2 Chronicles 16:9.

Pastors must avoid adjusting their perspective to coincide with the worlds’ sinful behavior, Frost said, and should make sure they’re praying for lost souls when seeking revival and spiritual awakening.

“I believe that in many ways,” Frost said, “we’re adapting to darkness all around us.” He referenced Acts 1:2-3 in drawing a picture of “true” revival. In Acts 1, “there was Christianity in the midst of hostility,” Frost said. “Maybe God is answering our prayers, because it was in the midst of that kind of context that the church began to spread, the church began to grow. It was when society around it was opposed to the church, that the church was most bold.”

Early Christians didn’t pray for support found in such organizations as the Alliance Defending Freedom, but they prayed for boldness to stand in the face of adversity.

“So be careful what you pray for when you pray for awakening and revival, because it frequently comes in the context of difficulty,” Frost said.

Other speakers included NAAF Executive Director Jay Wells, who focused on biblical teachings on marriage and family; and Harold Dean Trulear, associate professor of applied theology at the Howard University School of Divinity. Trulear, who serves as national director of Healing Communities USA and Prison Reentry Ministry, detailed ministry initiatives that churches can take to minister to citizens returning to communities after imprisonment.

By Joe McKeever Freely you have received; freely give. (Matthew 10:8) JACKSON, Miss. (BP) -- Dr. Watson was complimenting Sherlock Holmes on a brilliant observation no one else had noticed. "Of course," Holmes remarked. "It's what I do." Forgiveness and grace -- that's what we believers do. Here is … END_OF_DOCUMENT_TOKEN_TO_BE_REPLACED