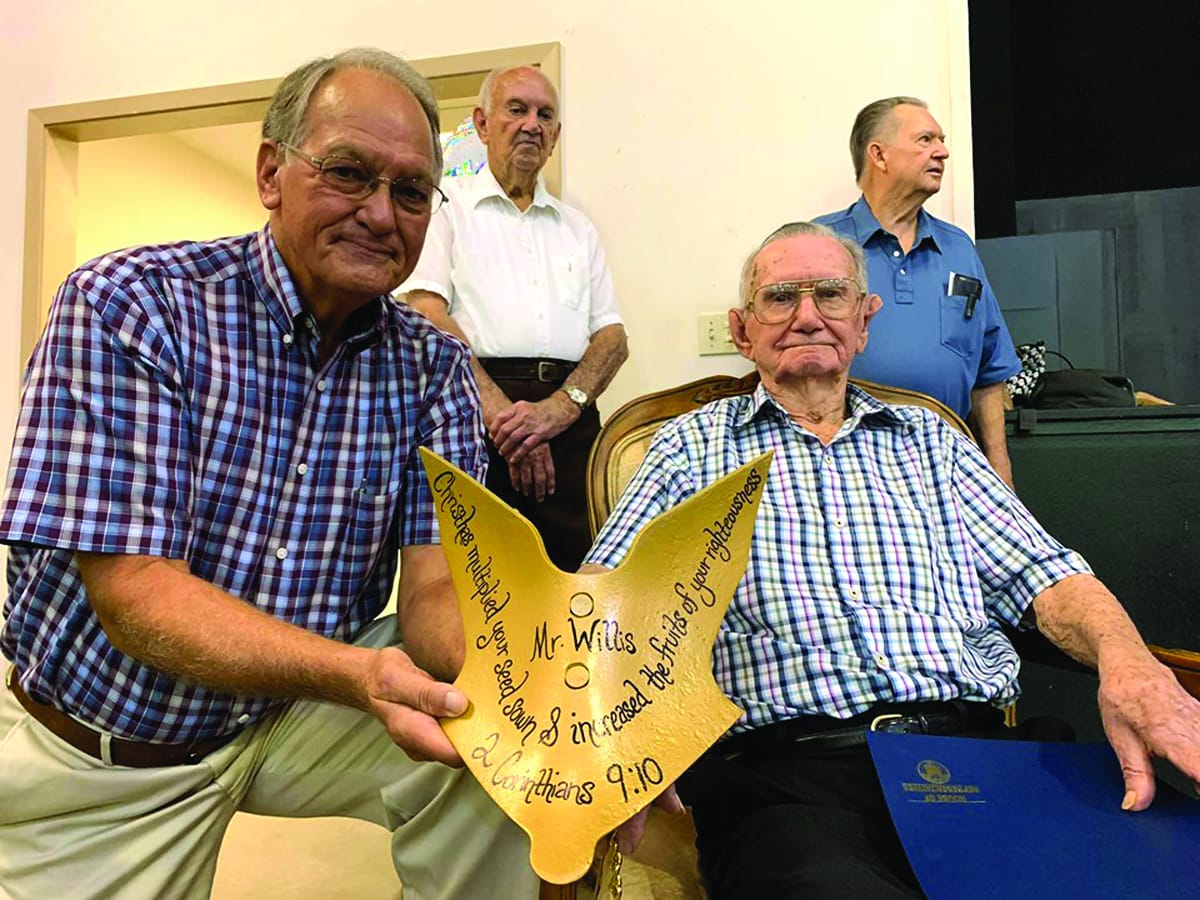 Pastor Carl Gulde presents Willis Prather a plow share with an inscription to commemorate his 100th birthday at a ceremony at Bethel Baptist in Colfax. Brian Blackwell photo

COLFAX, La. (LBM) – On his most recent birthday, World War II veteran Willis Prather celebrated a century of memories, with special appreciation for his time of service to the country.

The 100-year-old Prather was a member of the famed 82nd Airborne Division.

As he scanned the crowd during the Sept. 22 party at the Bethel Baptist Church in Colfax, he was speechless while remembering those who served with him overseas and those who were waiting for him when he returned home.

“It was just a time when we had to be very, very, very thankful,” Prather, who accepted Christ when he was eight, told the Baptist Message. “I knew the good Lord had to be there taking care of His people. He wasn’t visible, but in your heart you knew He was there right beside you in each battle. I prayed and talked to Him many times, and thanked Him for the day He brought me home.”

Prather joined the 82nd Airborne Division in 1943 as a 23-year-old from Eunice, and was assigned to a field artillery regiment at Fort Sill in Lawton, Oklahoma.

From there, he traveled to several states and countries until he reached Normandy, France, on D-Day, June 6, 1944 — when Allied forces invaded northern France by means of beach and air landings. D-Day was the largest seaborne invasion in history, and began the liberation of German-occupied France from Nazi control, and laid the foundations of the Allied victory on the Western Front.

“Being part of the Airborne Division I landed in a glider airplane behind enemy lines not far from Normandy Beach,” he said. “I wasn’t injured but a lot of soldiers were. They landed in bushes and trees, and on fence posts and buildings. After we landed ashore, we dug fox holes and found protection in hedge rows.” 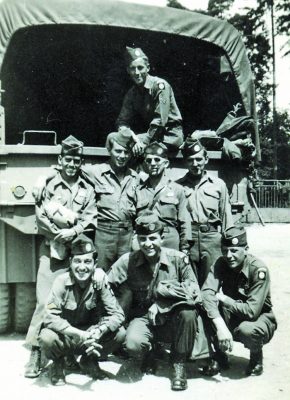 Seven months later, Prather was part of a surprise attack by the Germans in the Ardennes forest, 339 miles from where he had fought on D-Day.

After an all-night drive to load and unload supplies at Camp Suippes in Sissone, France, his unit stopped in Bastogne, Belgium, to help fellow soldiers who had been surrounded by German troops.

For six weeks, Prather and his fellow servicemen stood down the enemy in waist-deep snow without access to a bath.

Despite the daunting weather and intense battle conditions, Prather and his friends refused to give up hope, he said. He added he witnessed Christ followers like him place their hope in the Savior, confident He would deliver them.

Finally, on Christmas morning, the sun broke through the clouds and planes arrived with much-needed supplies to sustain them as they won their battle against the Germans.

“The 101st and 82nd were fighting in this same battle,” he said. “One of the things that I remember is the Germans tried to get us to surrender, but one of the U.S. generals replied ‘nuts.’

“Some of the Germans dressed in American uniforms and tried to direct our soldiers into German territory. But it didn’t take long to catch on to what they were plotting and to foil their plans,” he continued. “The weather had been too inclement for our planes to get through with supplies and support. But when the sun broke through, the sky was full of our planes and the enemy was defeated, and they began to run. It was a glorious sight.”

As they continued their move into Germany, Prather and his brother in arms continued the assault on the enemy, capturing the entire 21st German Army Group in Cologne, Germany. His company also stumbled upon several concentration camps, which were filled with Jewish prisoners that were weak and barely able to stand or keep their eyes open.

Prather was able to return to the United States on Christmas Day, 1945, and found his wife, Ina Vera, and newborn son, Winnfred, waiting for him. His family moved to Colfax in early 1946 and bought 60 acres to build a home where he still resides today.

Prather joined Bethel Baptist on Aug. 8, 1946. He became a deacon in 1952 and taught an adult men’s Sunday school class for nearly 60 years. He also ministered away from his church by sharing the Word through a local radio show for seven years.

Prather retired in 1981 from E.S. Voelker Company in Alexandria, where he fixed hay balers for 31 years.

Despite their busy schedules, Prather and his wife prioritized raising their children in Christ. His daughter, Joan Futrell, said her father “gave us a godly legacy that will be felt for many generations to come.”

“He has set the bar for our family all these years,” Futrell said. “He made sure that we were at church and that we knew what church was all about and was very instrumental in giving us the foundations that led me, my brother Winnfred and my sister Sharon Turner to Christ. He’s my hero.”

Looking back at his experience in World War II, Prather said many of his friends died on the battlefield during that time and that he is thankful God spared him.

“It was heart touching,” he said. “You had to be grateful for all you saw and went through.

“Today I am so thankful that I am one in that generation,” he continued. “I’m just thankful that the good Lord fought the battles for us and let me come back to raise my family. I have so much to be thankful for at 100.”

By Steve Horn ALEXANDRIA, La. - At the risk of sounding like the cartoon character, The Born Loser, I confess to you that I’ve had my share of losing. In four seasons as a high school football player for example, we won 6 of 40 games and 2 of those 6 were taken away for using an ineligible player. I’m not … END_OF_DOCUMENT_TOKEN_TO_BE_REPLACED