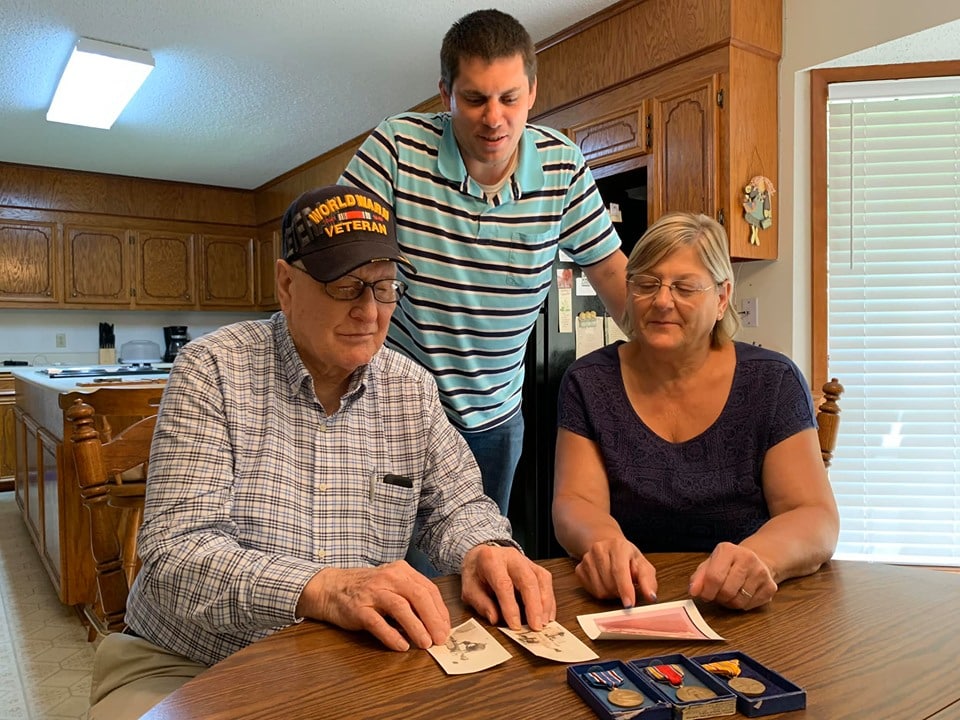 Gene Tiley (left) shares with his pastor, Brian Gunter, and his daughter, Janet Cheveallier, about the many medals he earned as a member of the U.S. Navy during World War II. Tiley is a member of the First Baptist Church in Pollock, where he has served faithfully as a deacon since 1967. Brian Blackwell photo

POLLOCK, La. (LBM) –Seventy-three years have passed since Gene Tiley served in World War II as a member of the U.S. Navy; but rarely does a day go by when he does not think about friends who perished in battle.

Known as the Greatest Generation by historians, those who fought in the last large-scale war are largely known to shy away from any attention given to the heroics they might have displayed.

For many war survivors, some memories are painful to recall but at the same time each is an important reminder about the necessity to be vigilant in defending the freedoms won by the many sacrifices made in combat.

“I think about those old boys that I fought alongside, especially those who lost their lives,” Tiley, 93, told the Baptist Message. “People risked their lives during the war, and others made significant sacrifices at home.

“When I hear the word ‘Greatest Generation’ a sense of pride comes across me,” he said. “I was always proud to be a part of it.”

Tiley, who is a deacon at the First Baptist Church in Pollock, entered the Second World War at the age of 17 in May 1944, a year before the war officially ended.

“If you were warm and breathing, you were expected to defend our country,” Tiley said. “I just wanted to do my part. It was a great feeling to know you were a part of it. I was 17, figured there was a war and I should get in it.” 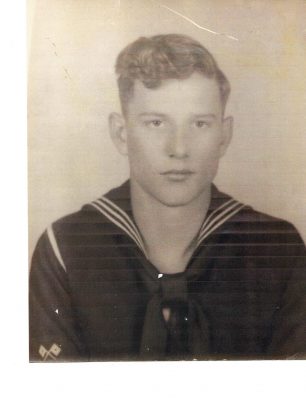 Tiley, who is a deacon at the First Baptist Church in Pollock, entered the Second World War at the age of 17 in May 1944, a year before the war officially ended. Submitted photo

Tiley was deployed to Guantanamo Bay, Cuba, Panama Canal, Panama, as well as to Saipan and Okinawa in Japan, and, to Manilla and Luzon in the Philippines. He was a signalman on a landing ship that delivered tanks, vehicles, cargo, and troops directly onto shore with no docks or piers. He returned with a Victory Ribbon, American Area Ribbon, Asiatic Pacific Campaign Ribbon and Philippine Liberation Ribbon.

He was delayed from returning home for a while after the war ended. But he arrived back in Pollock in 1946 and joined his father, Roscoe A. Tiley, and brother-in-law, Bracie E. Montgomery, to open Johnson’s Café. He also was co-owner of Tiley Montgomery Grocery and later the owner of Tiley’s Supermarket in the community.

Tiley believes God spared him from death during the war so he would have an opportunity to accept Christ in 1951 during a revival at the First Baptist Church in Pollock. Until then, Tiley had not attended any church service.

But he accepted the invitation of a friend to go that night. Since then, he has been a faithful member of First Pollock—volunteering as Sunday school general secretary for 25 years, and, serving as deacon since 1967.

Brian Gunter, pastor of First Baptist Pollock, said Tiley is a shining example of a man who served his family, church and country well.

“Gene is a good example of what a deacon should be,” Gunter said. “He has the respect of people in the community. He is one of our longest continuous church members. Gene is last World War II veteran I know personally. I have great deal of respect for all veterans but in particular those who fought in World War II because the stakes were so high. The world was being overtaken by some very evil people and they had to be stopped.”

Janet Cheveallier, one of Tiley’s two daughters, said men like her father make her proud to call herself an American.

“I’m very proud of all of them,” she said. “You can see the patriotism they had, but you don’t see as much of it as was shown by this generation. We’ve always had a flag flying at our house. We used to go to VFW meetings, and had covered dish meals with other veterans and their families.

“This whole generation deserves our respect for their service.”

By Lane Corley Olive trees produce one of the most desired and sought after fruits around the world. The trees can live for thousands of years. The olive and the olive tree is spoke of in the Bible on numerous occasions. Including a few references to family life, like in Psalms 128:3 – “Your children will be … END_OF_DOCUMENT_TOKEN_TO_BE_REPLACED