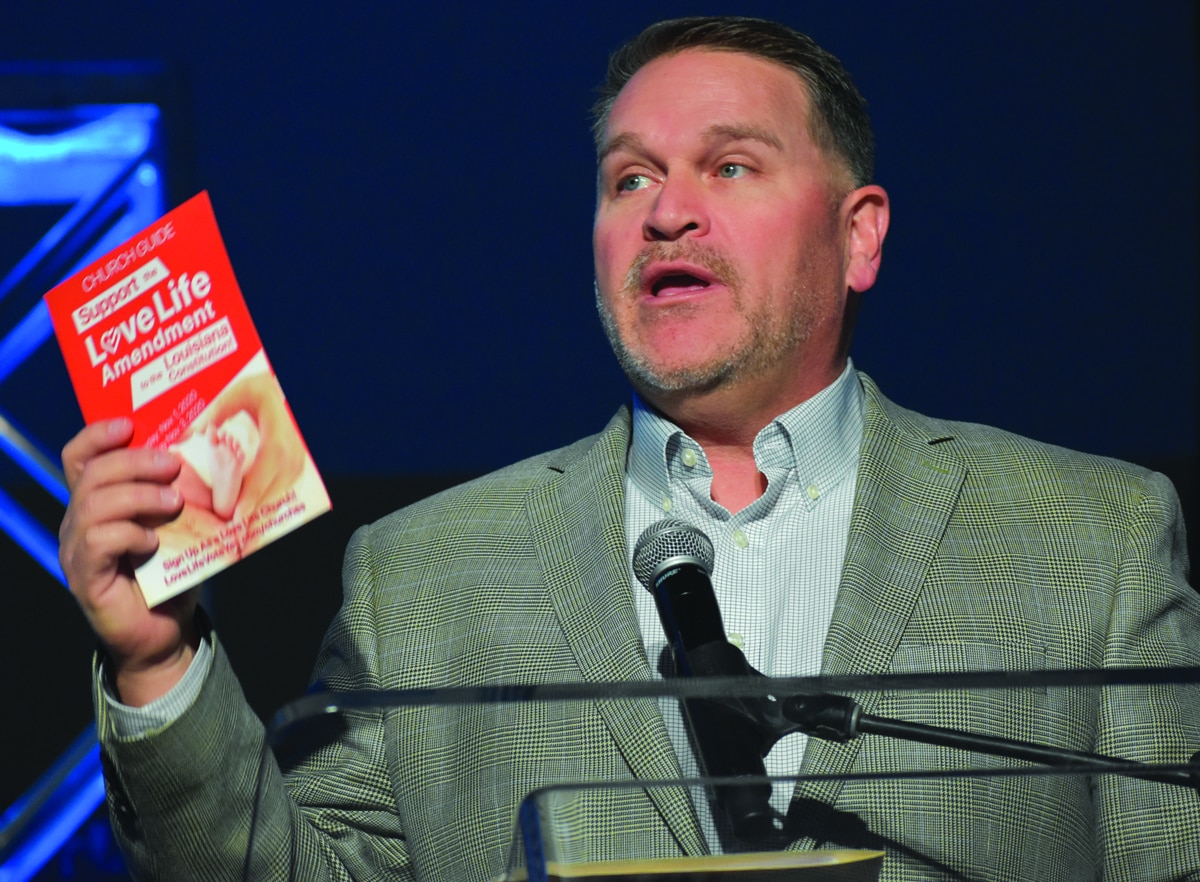 John Fream, pastor of Cypress Baptist Church, encouraged messengers during the Committee on Moral and Social Concerns Report to encourage others to vote for the ‘Love Life’ amendment in 2020.

Messengers approved four consensus statements, with three offering respectively: a statement of appreciation to the Randolph Riverfront Center in Alexandria for hosting the annual meeting and to individuals who contributed in important ways to the production of the twoday event; a declaration that being transformed from sinner to believer means our “old selves have passed away” as well as our old identity with those sins; and, a call for Louisiana lawmakers “to provide legal relief for churches to allow them the freedom to share information reasonably believed to be a true allegation about an individual to prospective employers or other congregations – as a means to prevent predators from continuing to harm others.”

But the fourth stated Louisiana Baptists’ support for the proposed “Love Life Amendment,” slated to be on the statewide ballot in 2020.

The resolution gives “our strongest possible endorsement of the Love Life Amendment and the constitutional protection it affords against unilateral actions to undo prolife laws’ and urges “all eligible Louisiana Baptists to register and to vote for the Love Life Amendment and to encourage others to do likewise in order to overwhelmingly pass this 2020 ballot measure.”

The actual language of the proposed constitutional amendment reads “To protect human life, nothing in this constitution shall be construed to secure or protect a right to abortion or require the funding of abortion.”

The amendment would aim to prevent action that has taken place in 13 other states, where an activist judge on their highest courts found an inherent right to abortion in their respective constitutions.

The Louisiana Baptist Office of Public Policy is organizing a campaign to be coordinated with Associational Mission Strategists to help pastors inform their congregations about the issues and to energize members about the vote this fall.

The allocation formula for distributing Cooperative Program gifts remains unchanged with 63.26 percent dedicated to support ministries in the state and 36.74 percent forwarded to fund national entities.

Lloyd Whitman, a messenger from First Baptist Church in Dry Prong, submitted a motion asking Louisiana Baptists to explore ways of promoting and facilitating ministries to criminal offenders and their family members. The motion was referred to the LBC Executive Board.

Messengers also learned about the progress made on a motion submitted during the 2018 LBC Annual Meeting by Myrt Hales, a messenger from the First Baptist Church in Rayville.

That motion, referred to the LBC Executive Board, had asked the LBC to form a committee to “explore establishing a Christianbased addiction recovery center to aid people with chemical dependencies to overcome and be redeemed into freedom from the chains of addiction and to experience the love and redemption found in Christ.”

The final messenger count for the 2019 Annual Meeting was 583, an increase from 535 who registered during the 2018 Annual Meeting at the Temple Baptist Church in Ruston.

The 2020 Annual Meeting is scheduled for Nov. 9-10 at the Franklin Avenue Baptist Church in New Orleans.

By David Jeremiah EL CAJON, Calif. (BP) - Something strange happens to the psyche of a nation in difficult times. The downtrodden begin to resent government and wealthy corporations and individuals, seeing them as out of touch with, if not the cause of, their plight. Desperation can lead to a reversal of … END_OF_DOCUMENT_TOKEN_TO_BE_REPLACED