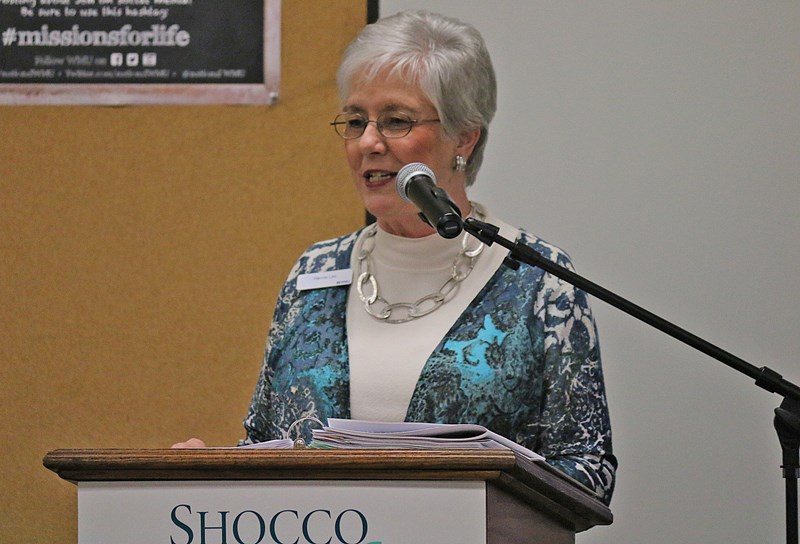 BIRMINGHAM, Ala. (BP) – Wanda Lee announced a search committee will be appointed to seek her successor as executive director/treasurer of national Woman’s Missionary Union at the group’s board meeting, Jan. 9-11.

During the meeting, WMU also heard mission reports and addressed ways it is assisting International Mission Board personnel who have elected to take a voluntary retirement incentive. The meeting was at Shocco Springs Conference Center in Talladega, Ala.

In her report, Lee said no date has been set for her departure. She pledged to continue to lead WMU until a new executive director is named and help facilitate a smooth transition.

“It is my duty to give sufficient notice and it’s my desire to ensure a seamless transition as the committee seeks someone with a fresh vision for our future,” Lee shared Jan. 11 at the meeting. “May God bless the new leader of national WMU as He’s blessed me on my leadership journey.”

Lee was elected executive director of national WMU in January 2000. She is the only woman in the history of WMU who also served as national president, an office she held 1996–2000. Lee served as president of Georgia WMU from 1993–1996. In addition, she and her husband Larry served as missionaries with IMB from 1979–1981.

Janie Wise, women’s missions and ministry strategist for Louisiana Baptists, said Lee will be missed.
“She has served faithfully with courage and wisdom possible only from God and has led WMU through some dark economic days and through the joy of celebrating the joy of celebrating the 125th anniversary of WMU,” Wise said. “Through her leadership we always look forward, seeking to engage every member of the WMU family, from the youngest Mission Friend to the most mature Women on Mission members in mission’s discipleship that shapes them for missional living throughout their lives.  Wanda is a leader for both today and tomorrow.”

Sharing the Gospel “by all means” was the challenge woven throughout national WMU’s board meeting.

WMU board members, along with state and national WMU staff, heard from North American and international missionaries who are seeking to share the love of Christ to those around them.

Whether serving in Indianapolis like Barry and Amy Rager or in Canada like Susan Booth, or across the globe, each missionary who spoke shared he or she was a product of Royal Ambassadors (RA) or Girls in Action (GA). Many first felt called to missions at a young age through these missions organizations.

By All Means — the WMU emphasis to be launched in Southern Baptist churches across the country in September 2016 — highlights practical ways to share the Gospel in today’s postmodern culture. It is based on the apostle Paul’s words in 1 Corinthians 9:22–23: “I have become all things to all people so that by all possible means I might save some. I do this for the sake of the Gospel, that I may share in its blessings.”

National WMU President Linda Cooper said, “Jesus’ message in Matthew 28:19 was clear: ‘Go therefore and make disciples of all nations, baptizing them in the name of the Father and of the Son and of the Holy Spirit, teaching them to observe all that I have commanded you. And behold, I am with you always, to the end of the age.’ We must go and share Christ in our everyday lives, by all means.

“The lost are not knocking down our church doors,” Cooper said. “They’re out there where we do life every day. We must be alert and look for ways to introduce others to Jesus … by all means … as we are going.”

At the three-day meeting, much focus was placed on tangible ways WMU is supporting IMB personnel who have elected to take a voluntary retirement incentive since IMB announced efforts to address budget shortfalls.

“We have grieved these missionaries coming home as a WMU family, with IMB, and with our churches,” Lee said. “But the world has come to our nation, and God, in His sovereignty, is bringing home one of our greatest resources — experienced missionaries who know various languages and cultures — and we need to help them during this transition.”

National WMU maintains a database of available missionary housing made available by churches, associations and individuals and make that information available to IMB to share with their personnel. In addition, many state WMUs are assisting missionaries as they return through special retreats, counseling, networking, updating resumes and monetary gifts, among other practical assistance.

“I pray this (reduction of field personnel) will wake us up out of our complacency,” Lee said, “that we will truly understand the depth of lostness in our world and embrace our responsibility to share Christ. This understanding begins through missions discipleship programs like Mission Friends, GA and RA that cultivate a missions heart. Along with providing these learning opportunities, we pledge our strong commitment to promote and support the Lottie Moon Christmas Offering, Annie Armstrong Easter Offering, Cooperative Program and Global Hunger Relief … those cooperative efforts to sustain and grow support for Southern Baptist missions.”

David Platt, IMB president, expressed appreciation to WMU for their support and partnership during his report.

“Thank you for all that you do to advance the Gospel and for the ways you are taking the initiative and coming alongside us to take care of brothers and sisters in ways we couldn’t have dreamed of,” he said.

Kevin Ezell, president of the North American Mission Board, also shared a report and expressed appreciation for WMU’s support and promotion of the Annie Armstrong Easter Offering.

In other business, the Executive Board of national WMU:

— Awarded nearly $184,000 in endowments, grants and scholarships in partnership with the WMU Foundation.

By Waylon Bailey One of the most exciting stories in the life of Jesus occurred in his home town of Capernaum. As Jesus taught in what may have been the house of Simon Peter, four men carried their paralytic friend to the rooftop, tore the roof away, and lowered their friend right in front of Jesus. You … END_OF_DOCUMENT_TOKEN_TO_BE_REPLACED