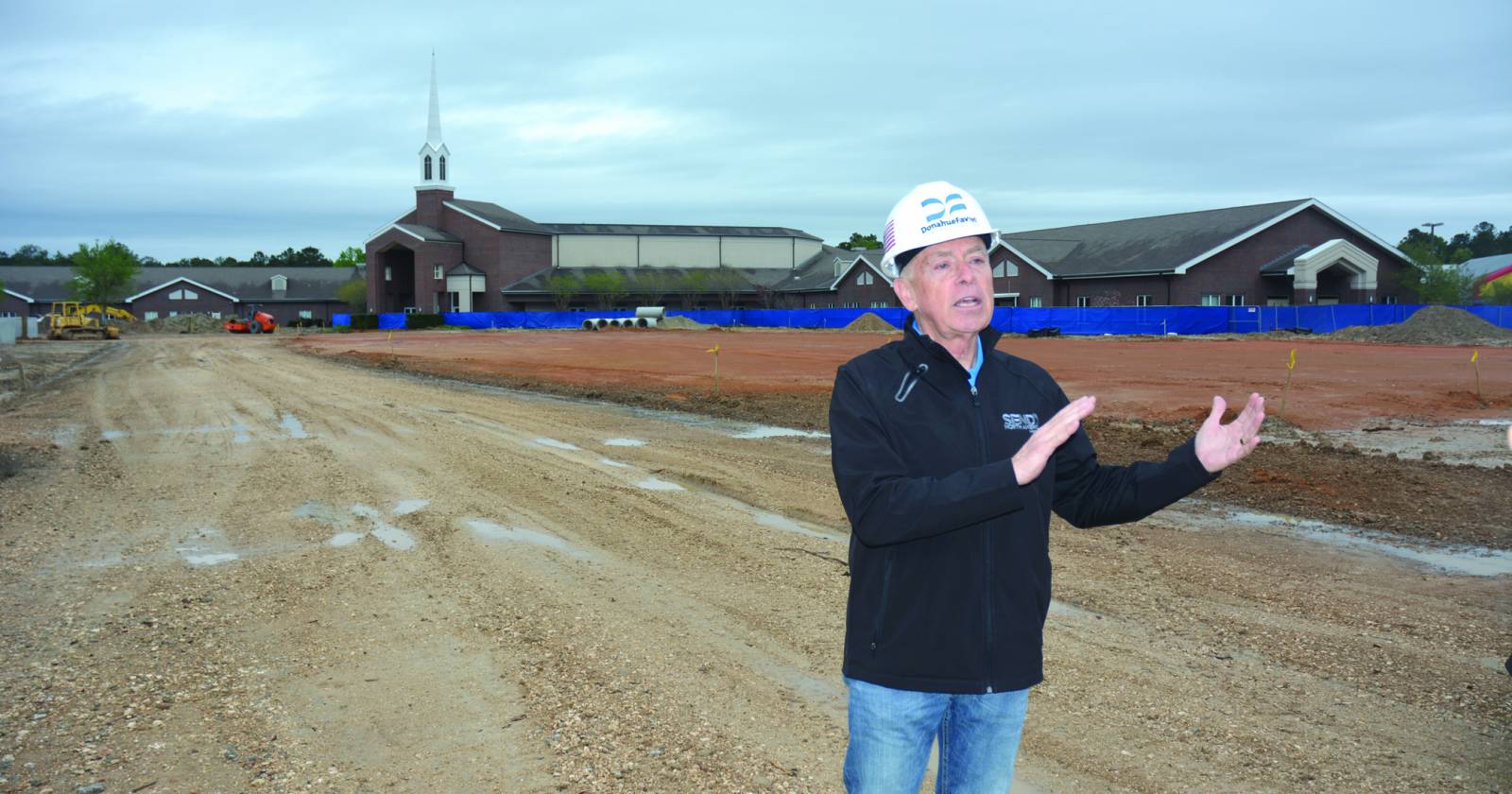 First Covington Pastor Waylon Bailey explains how the church is spending $34 million to expand its worship center, widen its foyer and provide additional space for its growing Sunday School ministry.

COVINGTON – The new worship center under construction at First Baptist Church Covington is a project 15 years in the making.

Once complete, the southeast Louisiana congregation believes the new facility will provide a space to reach their growing community for generations to come.

Scheduled for completion in mid-2018, the worship center will seat up to 2,400 people. That’s a far cry from the capacity of 1,250 in its current facility.

When the church moved from its location in downtown Covington in 2001, Pastor Waylon Bailey said much of the area was mostly undeveloped. As they began exploring possible locations for a move, a leader in St. Tammany Parish advised the church against moving to the present location, saying he believed the growth was headed in another direction.

But, church leaders continued to be drawn to the 43-acre site where the church stands today.

Fifteen years later, the church is surrounded by restaurants, storefronts, schools and homes.

Bailey said when he thinks about the 2001 move from the previous 2 ¼ acres of land with 50 parking spaces to the present spacious campus which  has 1,000 parking spaces – with an additional 500 to be added – he is thankful they listened to the wisdom of God and not man.

“We interpret that as God doing the leading,” Bailey said. “We were trying to be open to Him. And it has been amazing what has happened, and to be in this place.

“This area was just a highway going from Covington to Madisonville and connected to the interstate,” he continued. “There was nothing here, nothing going on. Then the whole town moved right behind us. They loved the Baptists so much they had to follow us down here.”

In addition to a new worship center, the $34 million facility under construction will also include a foyer much wider that will allow for increased opportunities to fellowship between services, as well as more space to house its vibrant Sunday school ministry. The project was approved by the congregation during its Wednesday night gathering May 11.

Currently, 1,400 people attend Bible study on Sunday mornings, which Bailey credits with strengthening the congregation’s passion for discipleship, evangelism and baptisms. This year, the church is on pace to baptize 150 people, a direct result of the Sunday school ministry, Bailey said.

Due to a lack of space, the congregation has three different hours for Bible study on Sundays which Bailey said its construction timeline.

While the worship center will not open until 2018, the Sunday school space will open a year earlier.

“We are thankful to get to serve God in the place we do,” Bailey said. “We live where there is a tremendous need for the Gospel. Young families are everywhere and this newest generation seems to be very open to the things of God.”

Bailey referenced a May 11 post by Thom Rainer of LifeWay Christian Resources, who said Generation Z – those born between 2001 and 2020, making up the largest generation in U.S. history – crave among other things personal contact. Bailey said First Covington strives to do this through outreach efforts such as door-to-door evangelism, Upward sports, special needs classes, Celebrate Recovery and Vacation Bible School. All four of these ministries draw a large number of guests who do not attend First Covington on a regular basis.

He said the efforts of building a new children and preschool facility, combined with concentrating on personal outreach will help them reach the Next Generation, one of two groups identified for special emphasis in the 2020 Report. Bailey was president of the Louisiana Baptist Convention when this report was proposed and later adopted as a seven-year strategy to guide Louisiana Baptists in more effectively reaching others for Christ.

“You don’t have to think and pray very long to figure out that reaching this generation makes sense,” Bailey said. “Personal contact is a universal human need and people want to go where people know their name. I always say it’s impossible to keep people away from a place where they are loved.”

When they first moved to their current location in 2001, their average Sunday school attendance was around 800, Bailey recalled.

He said the congregation’s growth is first the result of prayer, and then a matter of staying focused on a vision on what could be.

Bailey said as a result they developed an effective model of Sunday school classes – starting new units on a regular basis, looking for new Bible study leaders and structure Bible study units to be effective.

He said the same can happen to other churches around the state, but only through seeking the Lord first.

“We started on Wednesday nights, praying that God would open the doors and give us the people,” Bailey recalled. “The Spirit of God has worked in our people. We have continued to get involved in people’s lives, care about them and add value to their lives which we have done and will continue do to. Do those things and people will come.”

By Will Hall, Baptist Message executive editor ALEXANDRIA, La. (LBM) – It’s a presidential election year, Louisiana has suffered another devastating natural disaster, and as Yogi Berra has said, “It's déjà vu all over again." In 2016, presidential candidate Donald Trump came to Louisiana just days after the … END_OF_DOCUMENT_TOKEN_TO_BE_REPLACED