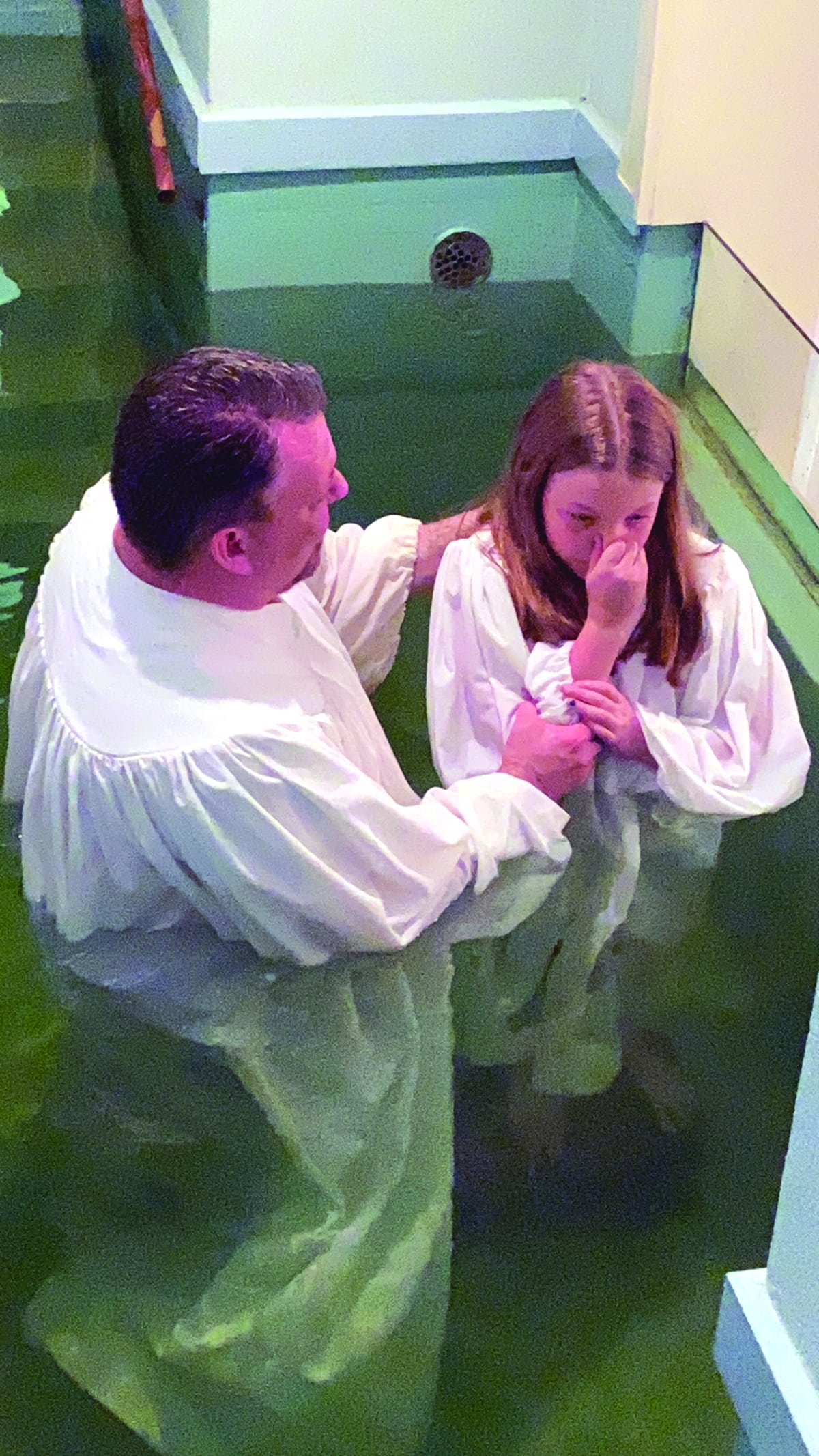 Nathan Davis baptizes his daughter, McKinley, during a worship service Oct. 25 at First Baptist Church, Coushatta. Davis had prayed throughout 2020 that his daughter would place her faith in Christ. Since he became pastor of FBCC, Davis has baptized more than 100 new converts. Submitted photo

COUSHATTA, La. (LBM) – Nathan Davis, pastor of First Baptist Church, Coushatta, accepted the “Who’s Your One” evangelistic challenge by sharing the Gospel with someone especially close to him — his daughter, McKinley.

Throughout the year, Davis planted Gospel seeds with his daughter and prayed she would become a follower of Jesus. His evangelistic efforts and daily prayers finally were answered during a revival service, Sept. 28, when McKinley, upon the invitation of evangelist Bill Britt to the First Baptist congregation, stepped forward to declare she had repented of her sins.

A month later, on Oct. 25, McKinley proudly declared her newfound faith through baptism in front of her FBCC family.

“It’s awesome to know that McKinley will join the rest of our family in Heaven one day,” Davis told the Baptist Message. “I tell our kids salvation is the starting point but not the finish line. I’m thankful we will get to spend life in Heaven together but also hopefully have a long life here to influence others for Christ.”

McKinley said she and her dad have shared many joyful times, but that her baptism is perhaps the most memorable.

“I was excited to show everyone I am a child of God,” she exclaimed.

McKinley was among two new converts who accepted Christ during the course of revival services, Sept. 27-30. Since September 2019, Davis has baptized 18 and more than 100 since he became pastor in 2010.

The baptisms are reflective of a congregation which draws 120 for its Sunday morning worship service that is committed to reaching its community despite the challenges presented by such circumstances as COVID-19 and Hurricane Laura.

Like many Louisiana Baptist congregations, First Baptist Coushatta responded to COVID-19 attendance restrictions by using social media to stream services to hundreds of viewers since late March. They also broadcast their Easter service on a local television station that reached more than 2,000 viewers.

Additionally, the church ministered to the community by delivering flowers on Mother’s Day, distributing meals to widows and others throughout the community, providing meals to first responders and giving copies of the services on DVD and CD to those who could not attend or listen online.

But Davis said he is intent on keeping his flock forward focused.

“I tell our congregation the best is yet to come — when we keep our eyes on Jesus.”

By Joe McKeever “‘…your ways are not my ways,’ saith the Lord.”  (Isaiah 55:8) Keep an eye on how the Lord works in your life. You might learn something useful for the next time He wants to use you. This little couplet seems to sum up 90 percent of what Scripture and life teach us concerning the operation … END_OF_DOCUMENT_TOKEN_TO_BE_REPLACED