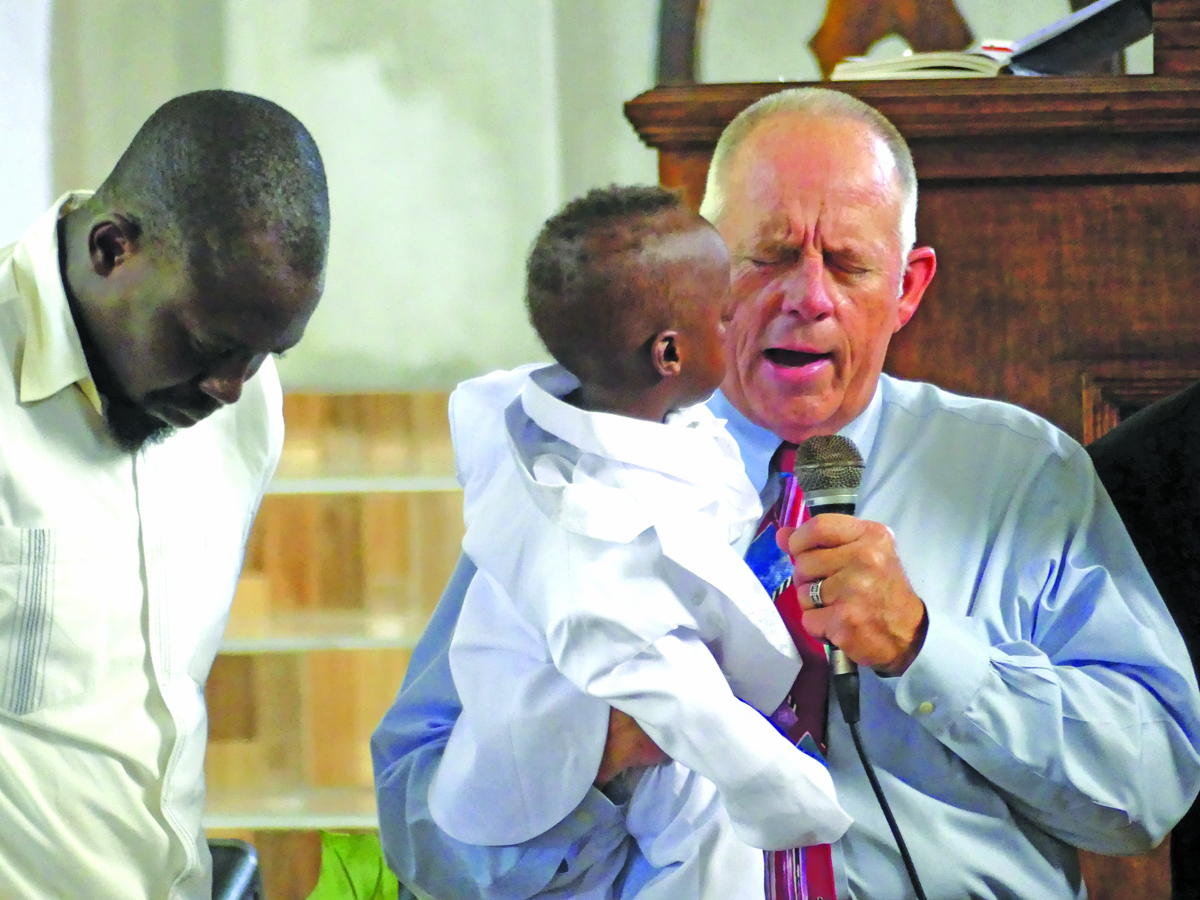 Wayne Sheppard (left) prays during a baby dedication he officiated at the New Evangelical Baptist Church in Croix-des-Bouquets, Haiti. He was part of a 44-member mission team that conducted Vacation Bible Schools, held medical/dental clinics, completed construction projects and evangelized.

ALEXANDRIA (LBM) – For the past nine years, Wayne Sheppard has been on mission with Louisiana Baptists, fulfilling a Great Commission commitment in a number of ways.

He has given leadership to a project to build a pastor’s training center and children’s village, helping Louisiana Baptists establish a strategic foothold in Haiti. Likewise, he led the effort to engage Louisiana Baptists in the evangelization of Belarus through the distribution of Bibles – with 4 in every 10 recipients surrendering their lives to Christ!

However, he will continue to pursue his passion for reaching the lost – as pastor of Grace Baptist Church in Casa Grande, Arizona.

“I never dreamed God would have allowed me to serve Louisiana Baptists in this role by connecting them with missions opportunities here in the United States and around the world,” Sheppard said. “But the Lord opened that door to help me live out a passion of helping churches do missions to the ends of the earth. We’ve been able to make so many connections and build so many relationships to see some significant things happen since we’ve been here.” 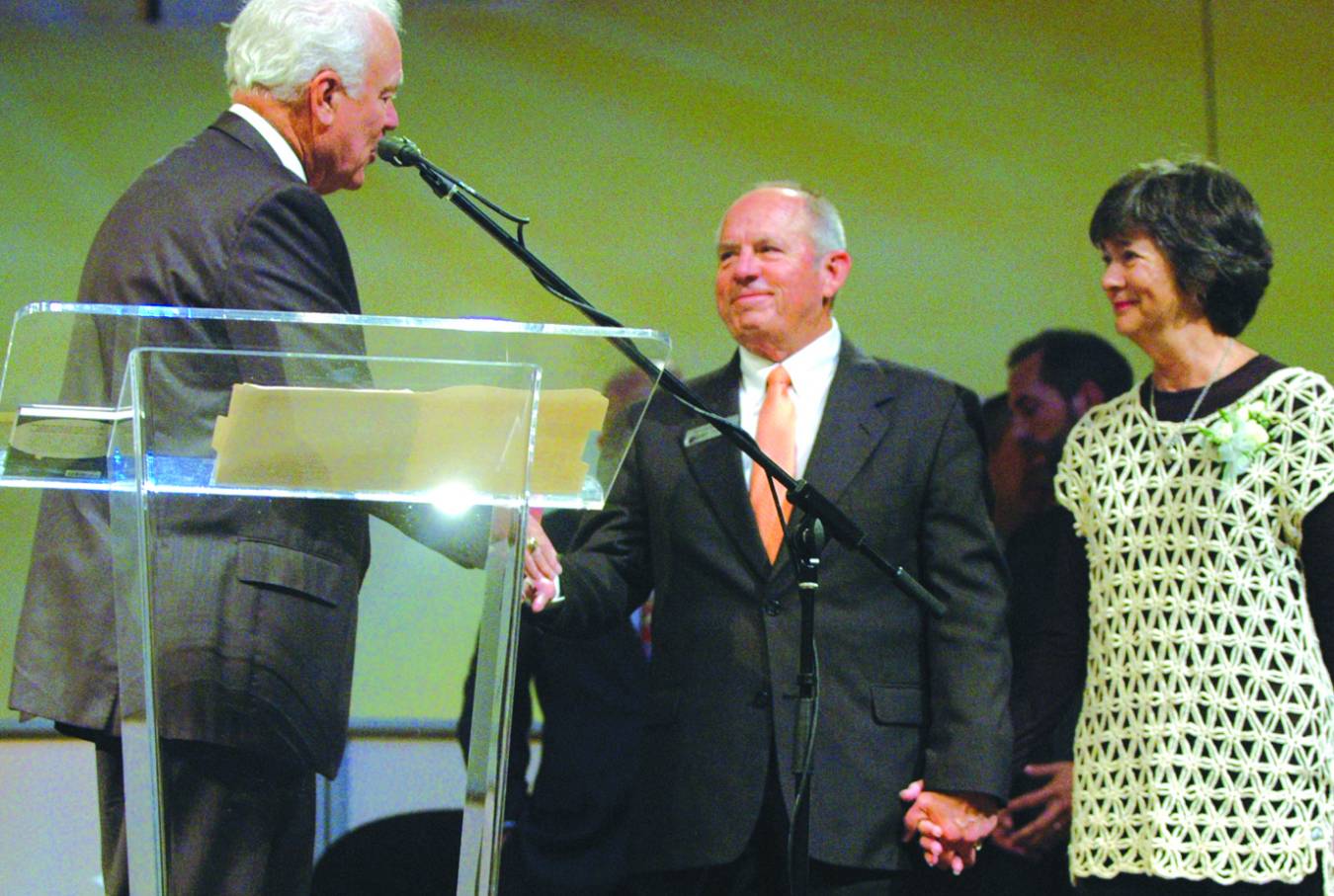 LBC Executive Director David Hankins honors Wayne Sheppard (who is standing alongside his wife Paula) during the Tuesday morning session (Nov. 14) of the LBC Annual Meeting on his upcoming retirement.Sheppard, partnership missions strategist for Louisiana Baptists, is retiring Dec. 31.

Sheppard has worked in ministry for 37 years, but he did not become a Christian until he was 19 years old as a student at the University of Texas at Arlington.

He said his spiritual journey began largely in part because of the witness of Paula Whitworth, who would become his wife. Sheppard said he was influenced in particular by the obvious joy she exhibited, and went with her during his first semester of college to a tent revival in Dallas, Texas.

“I came under conviction I was a sinner,” he said. “I understood why Jesus died on the cross, why He died for me and that I needed to enter into a relationship with Him, and that became the most monumental decision of my life, one that would shape the rest of my life.”

Through the next 11 years, Sheppard graduated from college and then worked in Texas in the medical field, managing a department of 23 employees at Blue Cross Blue Shield of Texas. During that time, God increasingly placed a desire in his heart to pursue ministry.

This call to vocational service was confirmed during a worship service at Oakland Heights Baptist Church in Longview, Texas, a week before Sheppard was to begin a job as chief financial officer at Good Shepherd Hospital in the town.

“While sitting in that service, it became clear God was changing my direction,” he said. “In fact, God spoke to both of our hearts in that service, separately. The next day I told the hospital of my change in plans, and I began my studies at Southwestern Baptist Theological Seminary soon after.”

Over the next 28 years, Sheppard served as pastor of four churches in Texas, and as a church planter for Living Waters Church in Gilbert, Arizona. 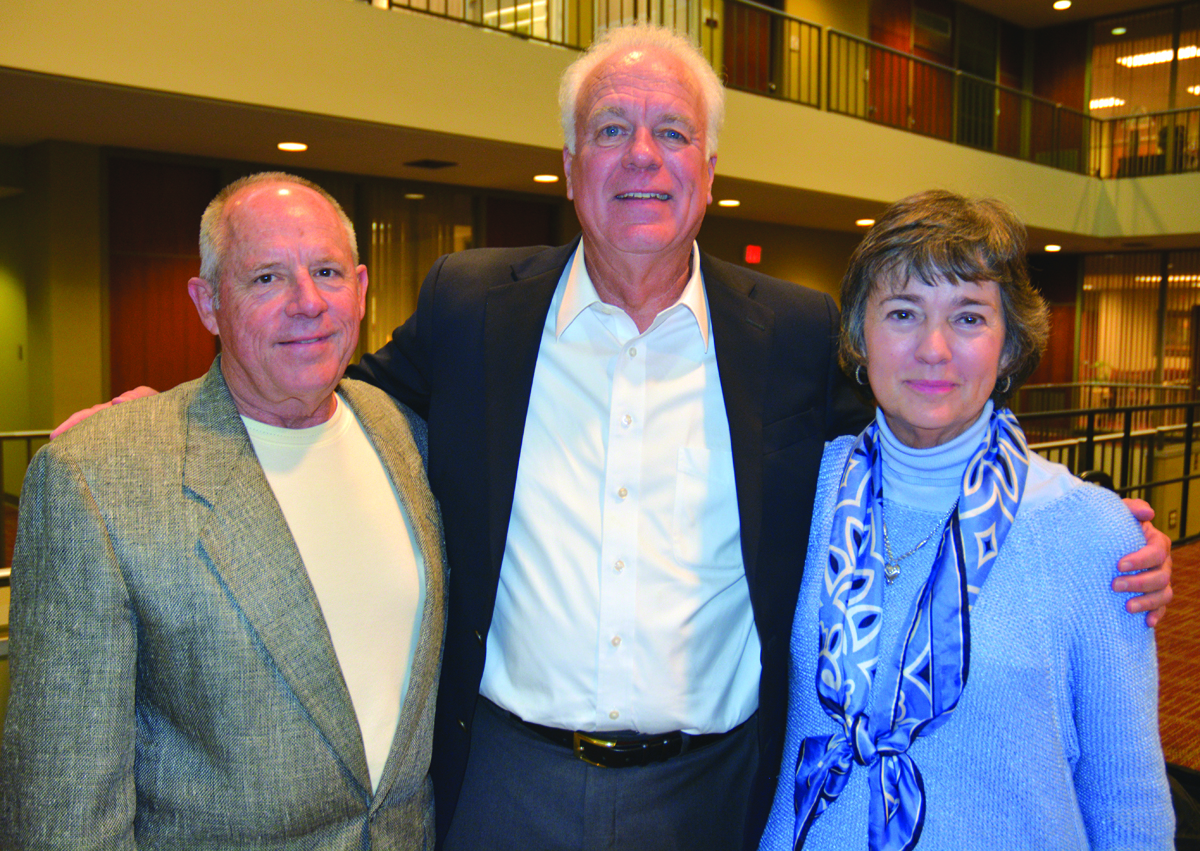 Louisiana Baptists Executive Director David Hankins (center) wishes Wayne Sheppardwho is set to retire, Dec. 31, as missions partnership mobilizer for Louisiana Baptists and his wife Paula as a retirement reception in his honor.

He assumed his role with Louisiana Baptists Oct. 1, 2008.

Sheppard has travelled in 16 countries and 23 states while engaging Louisiana Baptists in missions.

Each partnership has been rewarding in the relationships that have developed, he said, and the spiritual harvests God has provided. But he shared that there is a special place in his heart for the work Louisiana Baptists are doing in Haiti.

The country was devastated by a 2010 earthquake that killed more than 250,000 people and left hundreds of thousands homeless. Louisiana Baptists were among the first to provide disaster relief, and since then have maintained a ministry presence through mission trips that include construction projects, pastor training, medical clinics, food, water and clothing distributions, evangelism, children’s Bible clubs and Vacation Bible School.

Since acquiring land in September 2016, volunteers have completed a 200-feet-deep well that provides water for residents of the surrounding community and built a wall with security tower in prelude to construction of the first dormitory on the campus scheduled to start in 2018.

“With Haiti, there is a deep love for those people that will always stay with me,” said Sheppard, who plans to participate in additional mission trips to the country. “To see God work in their life has been a thrill. We are very thankful the Children’s Home has felt led to partner with that work because we wouldn’t be here at this stage if it were not for them.”

“When Paula and I got married, we made a commitment to seeing our family as much as possible and now it will happen much more often being available visit with them,” Sheppard said. “Coming out of a family whose members did not know Christ when I was a kid, we decided by God’s grace we would change the legacy of the name Sheppard. Being able to retire and invest more time into them is reason alone to begin this next part of our lives.”