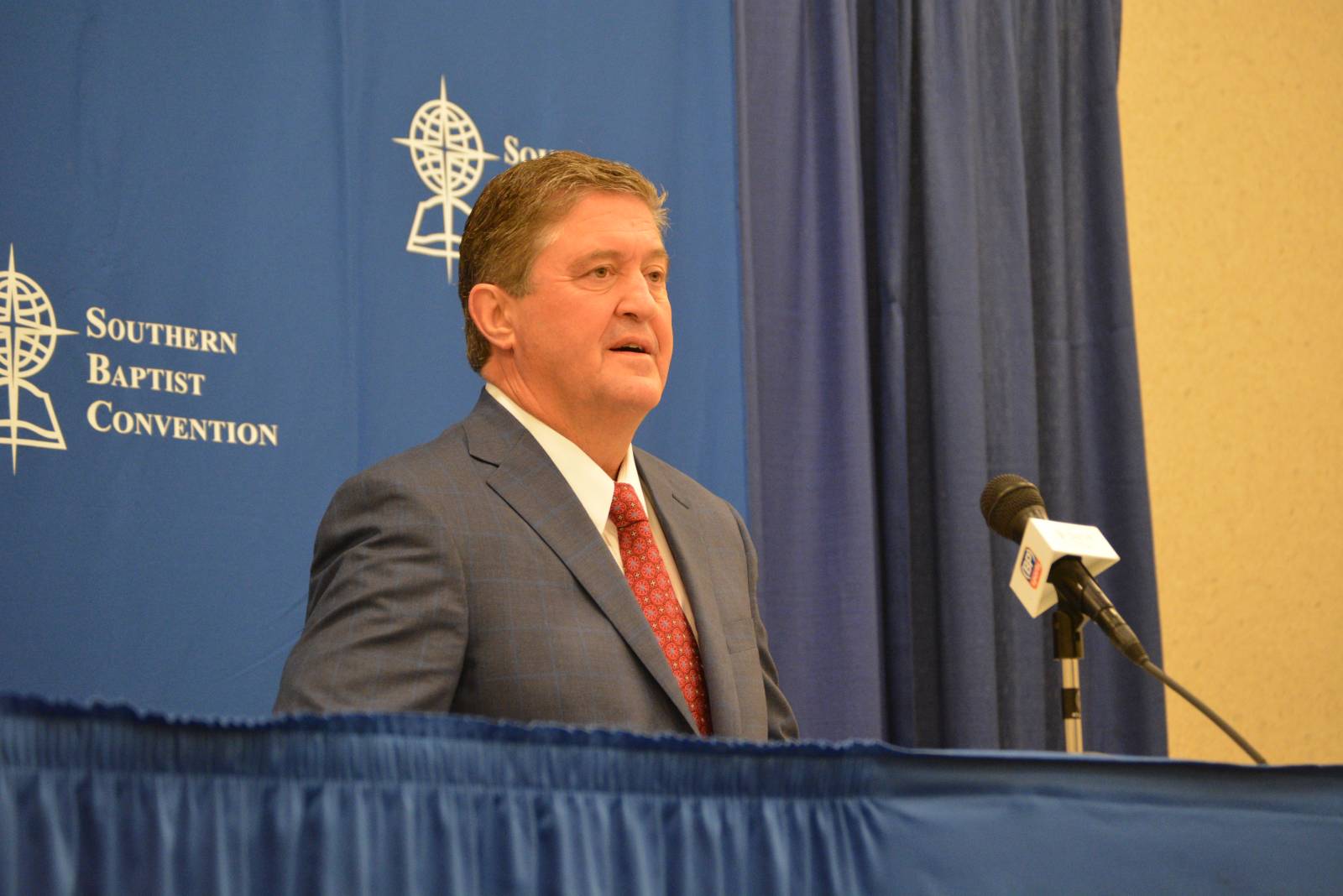 Steve Gaines answers questions during his Southern Baptist Convention presidential press conference. Gaines was elected the new president of the SBC after opposing candidate J.D. Greear dropped out in the spirit of unity as a third round of voting for the office was to begin on Wednesday morning. Brian Blackwell photo

Just moments before, Gaines and candidate J.D. Greear stood on the same stage to announce news that came as a shock to many in the crowd of more than 7,000 – Greear was stepping aside in the name of unity.

The announcement was met with the majority of the crowd standing to applaud the decision.

“If the devil was trying to divide us, he failed and he failed miserably,” said Gaines, pastor of Bellevue Baptist Church in Memphis, Tenn. “The Lord Jesus Christ gave us unity in a great way.”

Gaines and North Carolina pastor J.D. Greear had garnered the most votes in a three-person race with First Baptist New Orleans Pastor David Crosby, but neither won a majority in the first round Tuesday morning, forcing a run-off. In the second round of voting, Gaines received 49.96 percent of the votes compared to Greear’s 47.80 percent, but 108 votes were considered illegal because the wrong ballot was used or an indistinguishable mark was made.

Another run-off election was scheduled Wednesday morning. However, Greear and Gaines came forward with SBC President Ronnie Floyd to make the announcement that, in the name of unity, Greear was stepping aside to allow Gaines to be president.

Gaines said in his press conference he and Greear had both considered dropping out. Floyd felt that one of the candidates would step aside before Wednesday’s planned election.

“It’s supernatural that the Spirit of God lives within us. Jesus said, ‘My sheep hear my voice.’ Anything you hear from the Lord is going to be in keeping with Scripture, but God was prompting both me and J.D. to be willing to pull out at the same time.

“And at the same time He was prompting the president of the Southern Baptist Convention to pray for that,” Gaines said. “That’s not coincidental. That is the sovereign God ordaining something. So I believe with all my heart it was a special moment when both J.D. and I realized God said the same thing to both of us.”

Recounting the conversation, Gaines said, “He and I both were sensing the Holy Spirit moving in the same direction, and we had a good time talking last night,” Gaines told reporters. “We talked to the Lord, and we talked about the situation, and I really feel like what just happened was really a blessing from God, and I pray God would use it to help us go forward and tell people about Jesus Christ.”

“I looked at him and said, ‘You can have it.’ He said, ‘No, I want you to have it.’ It was more like that. I said, ‘Let’s just don’t vote on it because if we have another vote it’s going to be another tie.’ It couldn’t have gone better. He was just very gracious. He’s the J.D. I know him to be,” Gaines said.

During his private talk with Greear, who is pastor of The Summit Church in Raleigh, N.C., the Scripture passage that came to his mind, Gaines said, was Psalm 133: How good and how pleasant it is to dwell together in unity. The psalmist gives a couple of examples: the oil coming down Aaron’s beard and the dew from Mount Hermon.

Gaines explained that water flowing down from Mount Hermon watered all of Israel. “What it’s saying is this: The anointing of God brings unity. It starts at the top and it flows down,” he said.

“I think what you just saw is when the leaders are unified in the Lord Jesus Christ, it brings unity to the body. That’s what we need in our churches. That’s what we preach all the time at Bellevue,” Gaines said. “We don’t have to unify everybody. If we can just unify the leaders, that will definitely flow down just like the anointing oil, just like the dew from Hermon. We see it in our church, and I believe we’re going to see it in the Southern Baptist Convention.”

As president, Gaines hopes to emphasize spiritual awakening, soul-winning and stewardship, among other issues.

“We need to be more intentional and proactive about sharing Christ with people,” Gaines said, adding that good stewardship would enable Southern Baptists to send missionaries back to the field rather than bringing more home.

Gaines said he and Greear have had several conversations on the importance of both younger and older generations learning from one another.

Gaines closed his press conference with a prayer.

“I thank you for this day,” Gaines prayed. “Lord, I pray the Southern Baptist Convention greatest days would be ahead. Lord, not just because I’m president or Ronnie Floyd is the president, but because you are king of kings and lord of lords.”

By Waylon Bailey One of the most exciting stories in the life of Jesus occurred in his home town of Capernaum. As Jesus taught in what may have been the house of Simon Peter, four men carried their paralytic friend to the rooftop, tore the roof away, and lowered their friend right in front of Jesus. You … END_OF_DOCUMENT_TOKEN_TO_BE_REPLACED