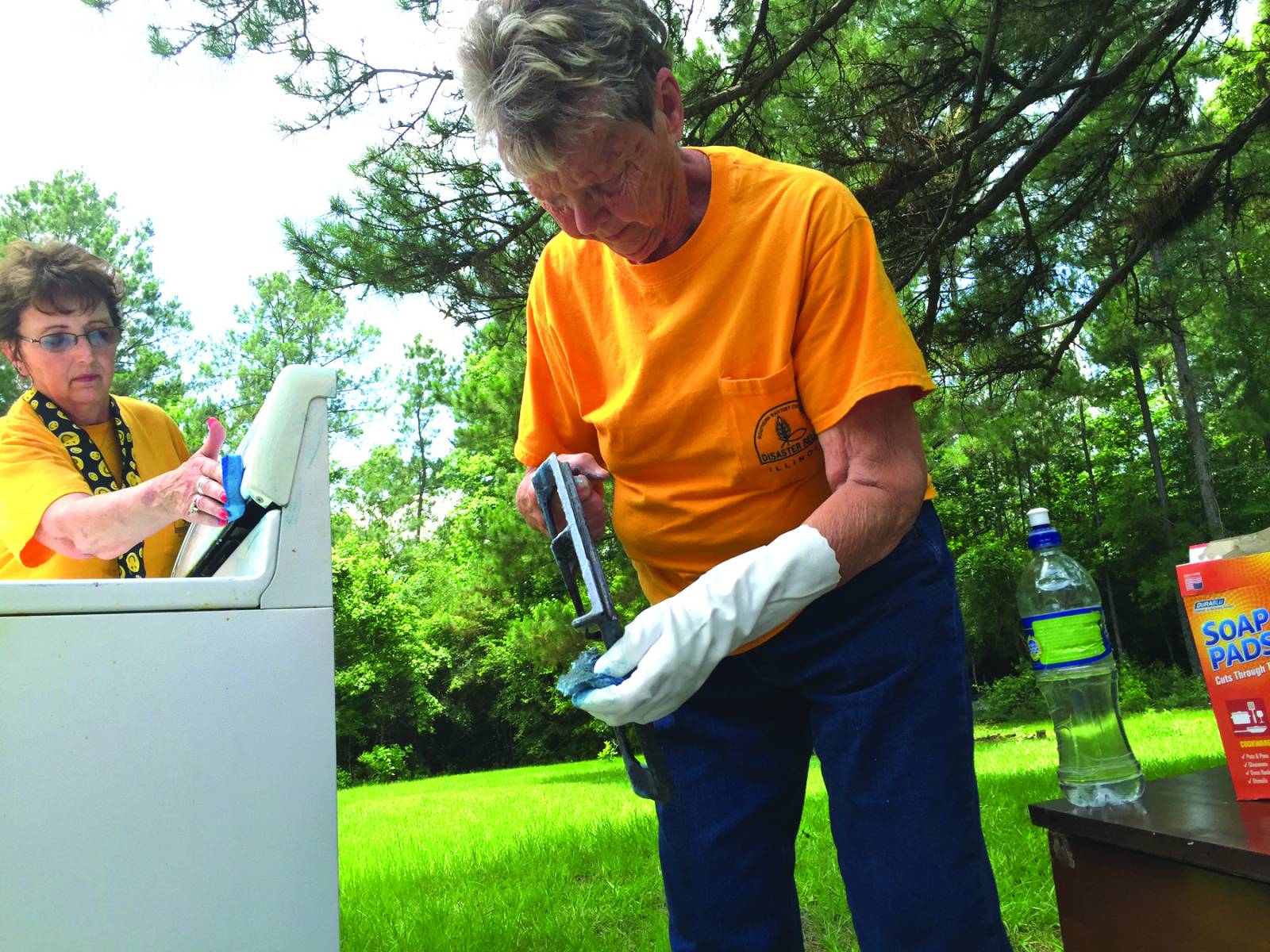 Margie Fulkerson helps rebuild a home in Evans. Fulkerson, along with fellow Illinois Baptist Disaster Relief workers, returned to the site two months after her husband, Don, passed away while mudding out the home.

EVANS – Two months have passed since her husband unexpectedly died from a heart attack at the same homesite where she was now working as a member of an Illinois Baptist Disaster Relief team.

Grabbing a bottled water to quench her thirst in the 90-degree Louisiana heat, Margie Fulkerson fought back the tears as she remembered the day her husband, Don, passed away while helping mud-out a home damaged by several feet of flooding.

Gone are the days when the Fulkersons served side-by-side as members of the team from First Baptist Church in Galatia, Ill. The couple, who would have celebrated their 57th wedding anniversary in April, had served on 15 disaster relief trips together since their first assignment in 2012.

As emotionally difficult as the decision was to return to work on the same house where her husband passed away  March 29, Margie Fulkerson said returning to finish the job is what Don would have wanted.

“He loved this kind of work and always wanted me to come with him,” she said. “I wanted to finish this for him.”

Fulkerson returned with seven other members of the team from Illinois. They arrived May 20 and worked through May 27, placing sheetrock, installing insulation and painting rooms.

Cathy Dudley was one of many on the Illinois team who worked with the Fulkersons on that first visit to Port Sulphur.

She said the hours and days following the death were difficult but what God did afterward made the situation a bright one for the future.

Dudley shared how during their return trip to Illinois after Don Fulkerson’s death, Margie decided with the advice of others that in lieu of flowers, money should be given to First Baptist Galatia’s disaster relief fund. The team stopped for a restroom break ands encountered a Vietnam War veteran, who upon learning what happened in Louisiana, handed them 100 dollars.

That was the beginning of what would be a donation fund for future relief efforts she said, as well as helping pay half the cost of defibrillators that are now used by Illinois’ teams. These devices are routinely used for life-threatening medical emergencies such as the heart attack that Don Fulkerson suffered. The defibrillators release an electric current to the heart to help revive the individual.

“When something good comes out of a tragedy, it makes you smile,” Dudley said. “It makes your heart feel good knowing people are helping and keeping his memory alive.”

But the goodwill gesture did not stop there.

Others found out about the team’s return to Evans and donated a trailer full of materials for the homeowners.

The team surprised the homeowners by filling their house with items such as a stove, chairs and other appliances. 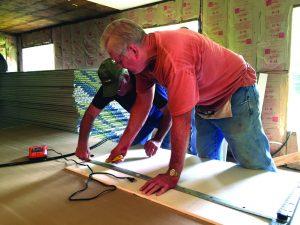 Members of Simpson Baptist Church work inside a home in Evans that was damaged in March by several feet of flooding. They were joined by members of an Illinois Baptist Disaster Relief team.

Jeremy Blocker, pastor of Simpson Baptist Church, which sent 12 volunteers to assist the Illinois team in the cleanup effort, was moved knowing the team would return to help the homeowners.

“It’s a humbling experience,” Blocker said. “And it’s enlightening to see them wanting to come do this in memory of their Christian brother.”

Margie Fulkerson, who has received encouraging cards from Louisiana Baptists, a sheriff and students from an area school, expressed gratitude for the support she has received.

The Louisiana Baptist Convention offered to pay for embalming services and flying of Fulkerson’s body back to Illinois. However, Illinois had insurance to cover these expenses, so the LBC is using the same amount of money to assist in the rebuild of the home Fulkerson’s team was working to complete.

“Thank you people from Louisiana for all the wonderful prayers and cards,” she said. “I can’t believe all the people who have remembered me and Don. I’m gonna keep doing what he loved for as long as I can and help those in need through this important ministry.”

By Waylon Bailey Recently, I saw a tweet on Twitter that asked the question, “What would Jesus do in the midst of a worldwide pandemic?” No answer to the question was given, but the author obviously had an agenda and a suggested answer. The good news is that it led me to really ask, “What would Jesus … END_OF_DOCUMENT_TOKEN_TO_BE_REPLACED