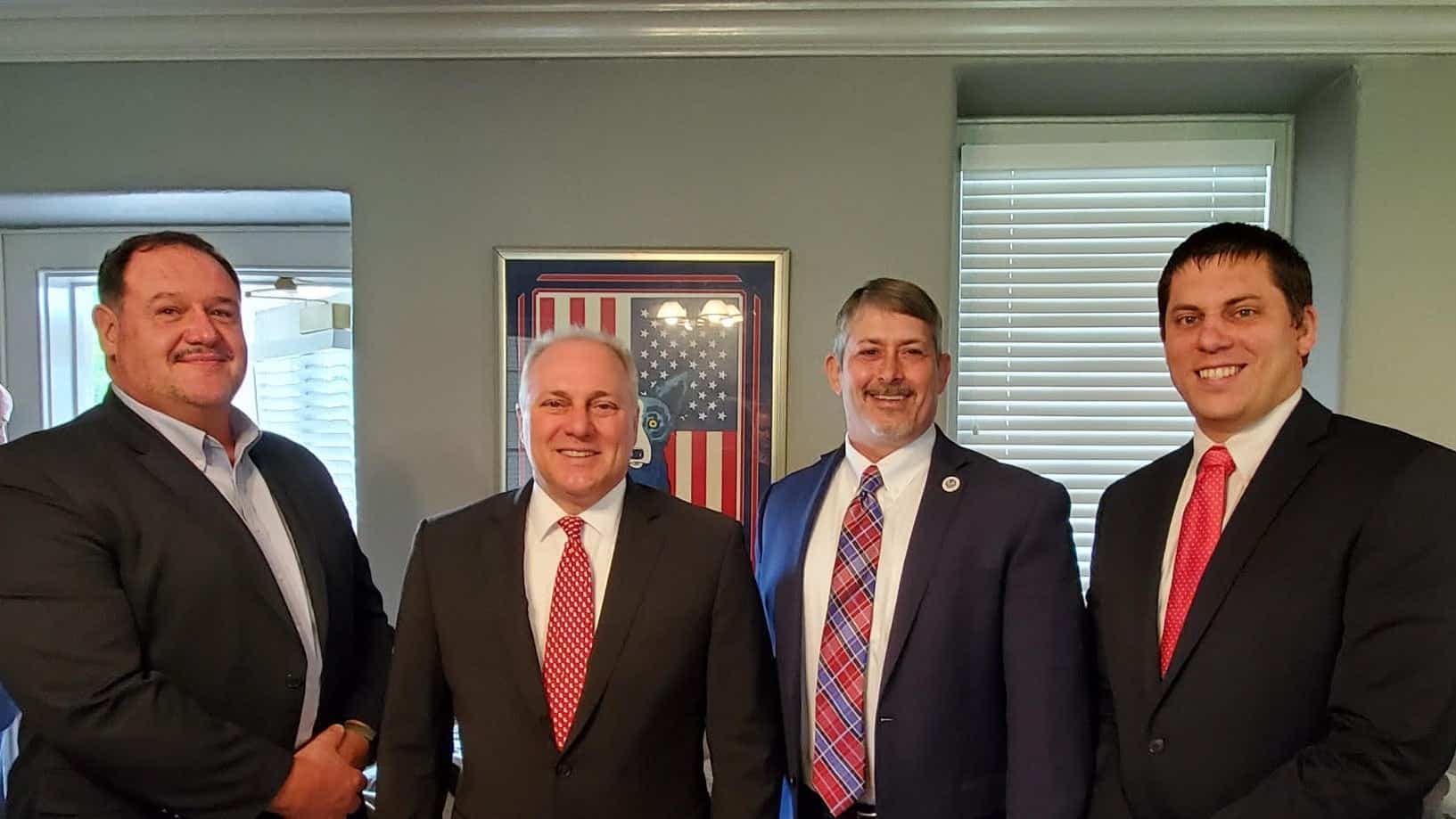 U.S. Rep. Steve Scalise, the number two ranking Republican in the House, spoke with members of the Louisiana Baptist Committee on Moral and Social Concerns, Monday, May 10, 2021, during their spring meeting, which was hosted at the Pentagon Barracks office of Lieutenant Governor Billy Nungesser. Travis Sanders (left), pastor, Hebron Baptist Church in Dry Prong, joined Scalise with Brian Gunter (fourth from left), chairman of the Committee on Moral and Social Concerns and pastor, First Baptist Church in Pollock. Scalise attended the meeting at the invitation of Louisiana Rep. Gabe Firment (third from left), who is a member of Gunter's congregation. Photo courtesy of Gabe Firment.

BATON ROUGE, La. (LBM)—U.S. Representative Steve Scalise (R-Jefferson Parish), who as minority whip is the number two ranking Republican in the House, took time May 10 to speak to members of the Louisiana Baptist Committee on Moral and Social Concerns.

The group was holding its spring meeting in Baton Rouge at the Pentagon Barracks office of Lieutenant Governor Billy Nungesser.

Scalise thanked the committee for Louisiana Baptists’ strong pro-life stances and shared about his efforts in Congress to force a vote on the “Born-Alive Abortion Survivors Protection Act.” The legislation, which has been blocked by the Democrat majority in the House, would mandate that babies who survive an abortion procedure be given the same standard of medical care offered to a baby of the same gestational age who is born prematurely.

“Who would have ever guessed we would have to debate in America whether a baby born alive should be protected?” Scalise said. “But our ability to protect innocent life has never been more in jeopardy.”

Scalise added that President Joe Biden’s rolling back of protections for the unborn was a key reason Republicans needed to get focused on “taking back the House in 2022.”

Scalise attended the meeting at the invitation of state Rep. Gabe Firment, a member of the First Baptist Church in Pollock, who also spoke to the committee.

By Rebecca Holloway PINEVILLE, La. – For years, I have read and heard the statement, “We need to hold life/our family/our possessions with an open hand.” The idea is that we are not in control of our lives or anything else on this planet. God is in complete control of all things and has the power and right to … END_OF_DOCUMENT_TOKEN_TO_BE_REPLACED