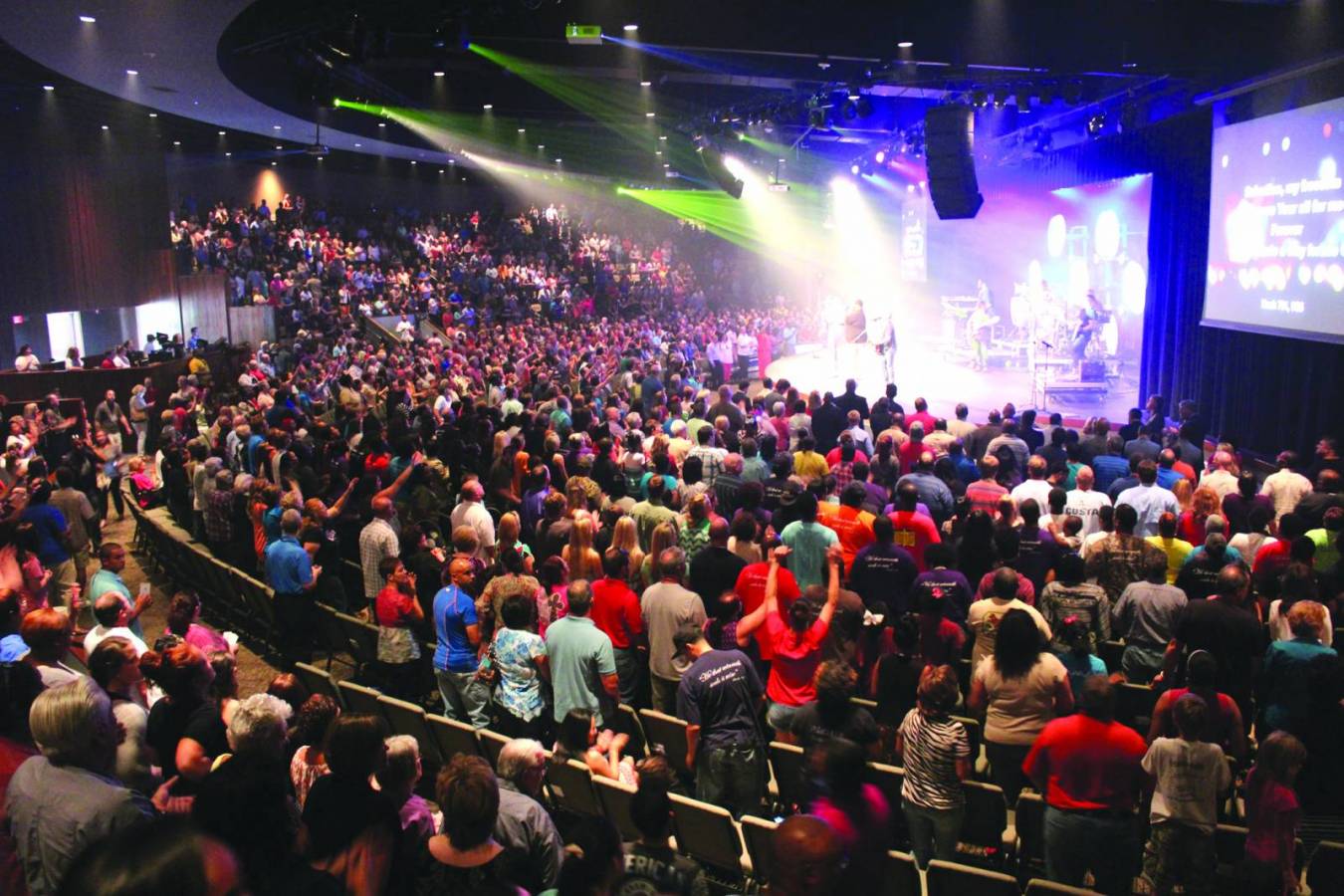 LAFAYETTE – Two prominent Louisiana Southern Baptist pastors were among the more than 50 pastors who spoke and prayed Wednesday night, July 29, in what is being hailed as the ‘largest prayer event to ever take place in Lafayette.”
Steve Horn, pastor of First Baptist Church, Lafayette, and Mike Walker, senior pastor of Bayou Church, in Lafayette, spoke and offered words of encouragement at the inter-denominational gathering, which was attended by more than 3,000 people from 50 churches.
The gathering, which was held at the Crossroads Church in Lafayette, came in the wake of the deadly shooting July 23 at the Grand Theater by John Russell Houser during the showing of ‘Train Wreck.’ The drifter from Alabama shot and killed two young women and wounded nine others before taking his own life.
Horn and Walker said during times like these there is a need for God.
“Wow! Three thousand people are gathering to pray for the families of the victims and our community,” Walker posted to the church’s Facebook page during the event. 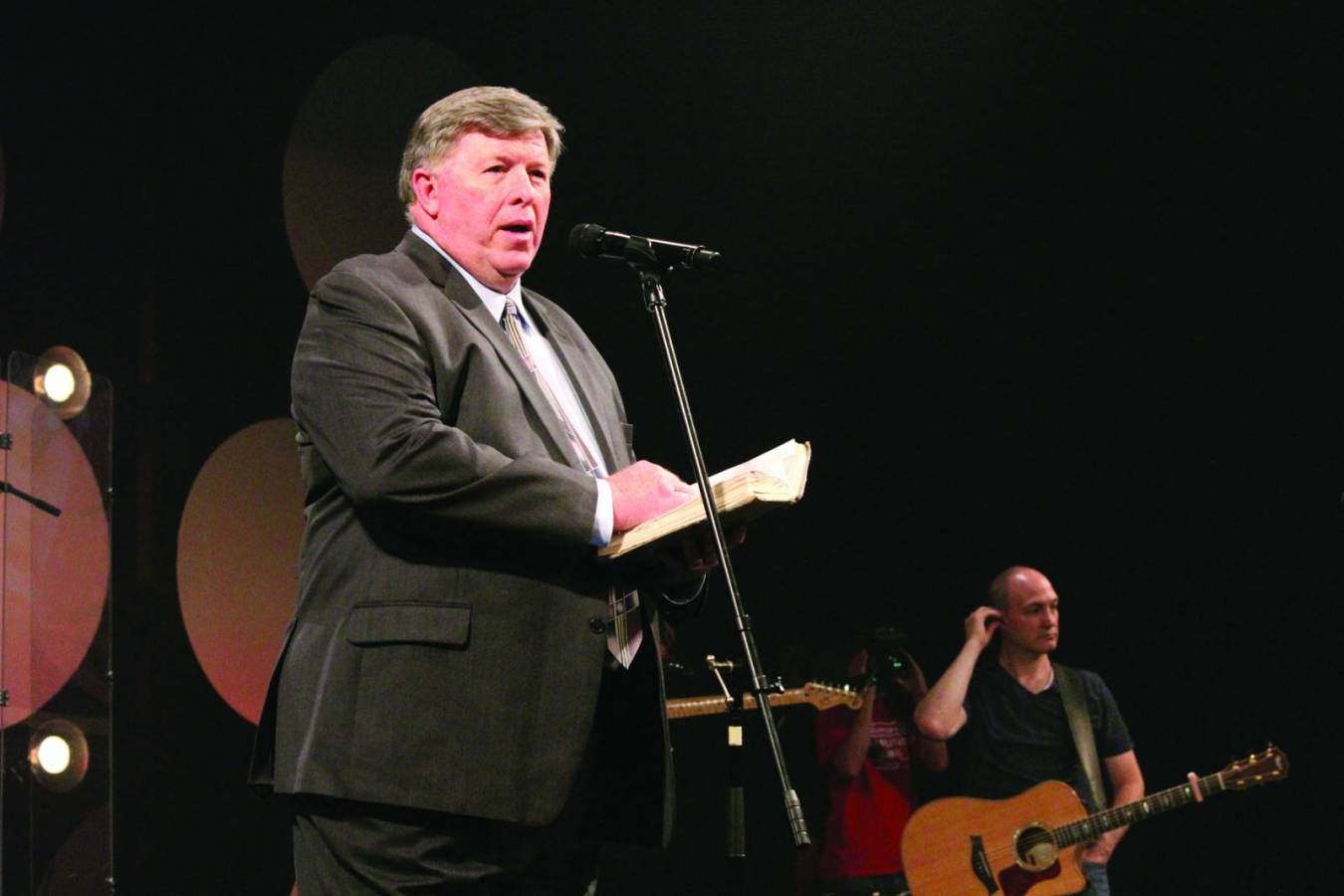 “I’ve been ministering for more 38 years in this town and there has never been something [the prayer event] of this magnitude,” Walker said. “There is incredible power … spiritual power … when 3,000 followers of Jesus gather to seek his face.
“There is no question we are united here by a single power, a single focus which makes for a mighty powerful night,” he added.
In looking around at the overflow crowd, the numerous pastors and denominations represented, Walker told the crowd, “It doesn’t matter what flavor you are, this is what heaven is going to look like. All genders, races and different denominations coming together to pray to our Lord Jesus Christ.
“Regardless of our preferences or our background, there is one central theme here,” said Walker. “And that is the cross, Jesus Christ and the resurrection.”
Like Walker, Horn, who was asked to lead in a prayer for healing of those who remain in the hospital as well as the emotional healing of the whole city, also felt a unified focus in the prayer event.
“I am glad we came together to do this service. It was important for our community to see the churches join together,” he said. “Several of the pastors who led tonight spoke of revival and spiritual awakening. It was pretty clear, as varied and different as we are in our different expressions of worship, that there is a hunger for God to do something in our community that is unexplainable outside of God’s work.” 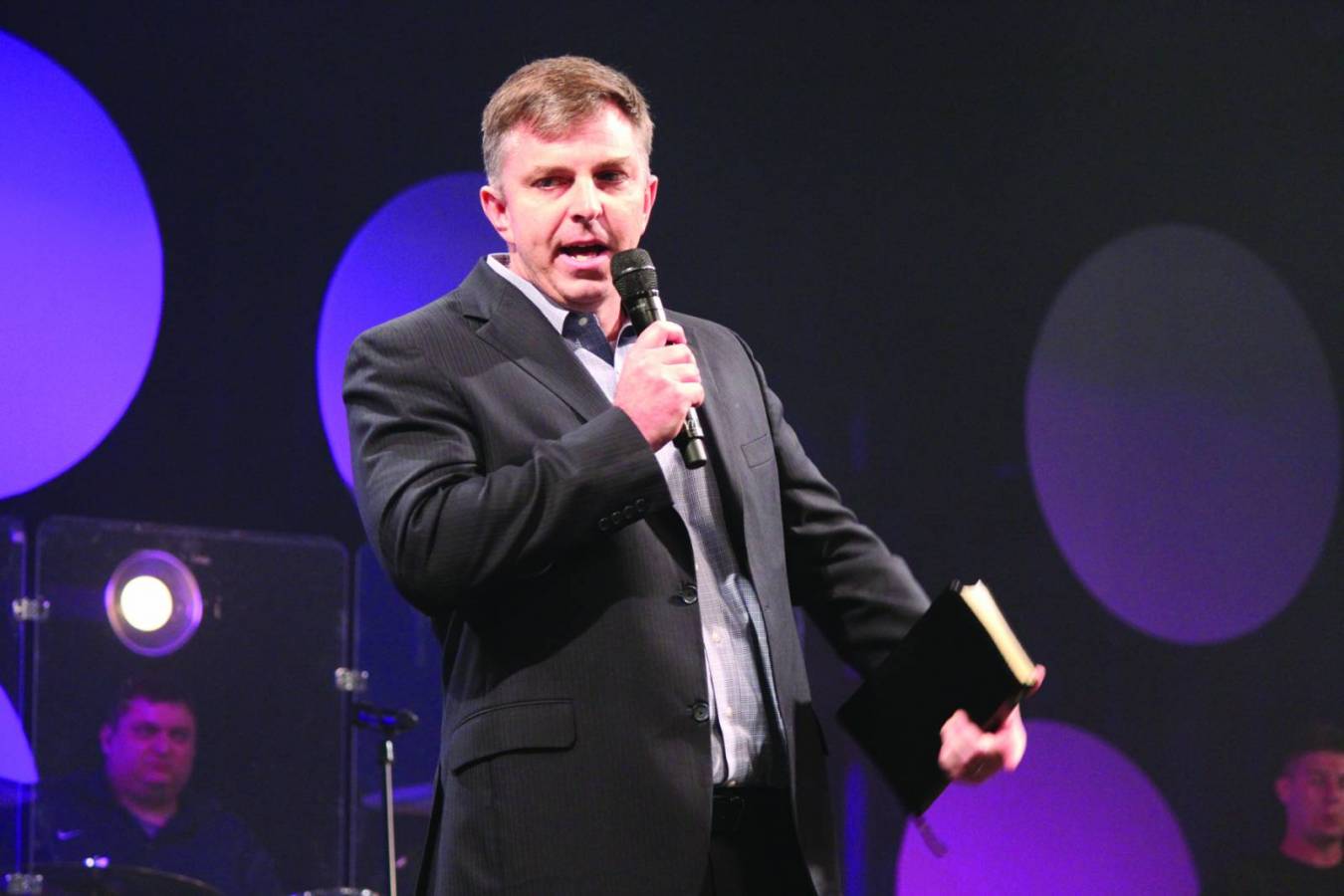 Steve Horn, pastor of First Baptist Church Lafayette, led in a prayer for healing of those who remain in the hospital as well as the emotional healing of the whole city.

To emphasize his point, Horn spoke of a sign unveiled at the City-Parish Government building.
“Last night (July 27) something happened in our city that has not gotten a lot of attention. Our City-Parish government unveiled a sign at the City-Parish Government building. The placement of this sign was voted on back in May,” said Horn. “In both English and French, the sign reads, ‘In God we Trust.’ I know one could argue those are just words, but the timing is amazing in light of what has occurred in our city over the last 10 days.
“It is up to those of us who are gathered here tonight to make sure those are not just words etched on a wall, but words that we truly believe,” said Horn.
In speaking with the crowd, Horn told the crowd that healing – spiritual and physical – can only come in Jesus.
“As we begin to pray for healing, let us declare the ultimate truth — healing is only in Jesus Christ,” he said. “Healing is not in the strength of our community, though we are and will be strong. Healing is only in Jesus.” 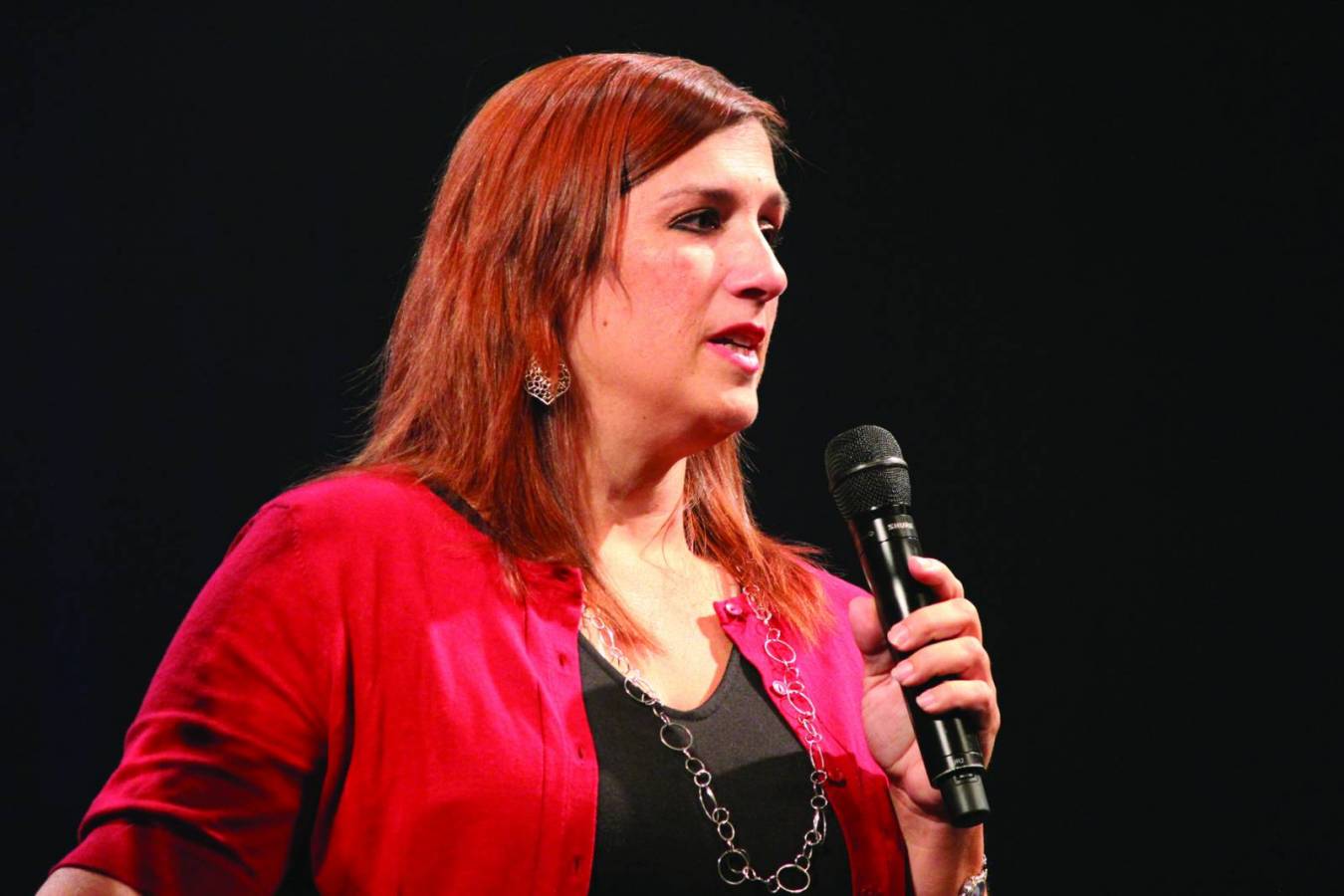 Shooting survivor Jena Meaux, a teacher in Iberia Parish, spoke about her desperate attempt to try and get out of the theater alive after being shot in the leg.

According to a story from KATC-TV in Lafayette, shooting survivor Jena Meaux, a teacher in Iberia Parish, spoke about her desperate attempt to try and get out of the theater alive after being shot in the leg.
“The movie had just started, about fifteen minutes in, when we heard three loud gunshots. We instantly got down on the ground, and that’s when I felt a bullet go through the side of my leg, and exit the other side of my leg,” said Meaux.
“I started crawling to the exit. And as I crawled I was praying, because I really thought he was going to shoot me in the back of the head. As I crawled on the ground, I prayed and I didn’t know if I could walk. But as I reached a corner, I was able to stand, and run toward the front exit,” Meaux continued.
“So many people are looking at the evil that was in the theater that night. But I saw so many instances of God’s presence, and he protected and spared my life, and that just tells me that he’s not finished with me yet,” said Meaux.
As she reached the exit, she said there were five or six angels taking off jackets and tying scarves for tourniquets for me. “I remember one lady kissing my cheek and telling me everything was going to be OK,” said a tearful Meaux.
Both First Lafayette and Bayou Church had prayer vigils roughly 24 hours after the shooting. First Lafayette held its prayer vigil event on Friday night as it prayed for the victims and their families but Bayou’s prayer vigil took a slightly different approach.
“We had a prayer vigil on Saturday night to thank all the law enforcement and first responders,” Walker said. “We had 225 people from our church and many, many came from the law enforcement and first responder community – Lafayette police, sheriff, state police, firemen and medics. We wanted to pray for them because they get lost in all of this. They have to deal with it just like a soldier has to deal with it.”
Walker said their ‘guests’ were given a huge and lengthy standing ovation.
“We didn’t have a lot of music [they sang Amazing Grace] and then we prayed,” Walker said. “We prayed for the families who had lost their love ones; prayed for the physical and emotional pain and we made sure we prayed for our law enforcement and first responders. We wanted them to know ‘we love you guys, and we support you,’” Walker said. “It was really a stirring tribute to these men and women who serve and protect.”

By David Jeremiah EL CAJON, Calif. (BP) - Something strange happens to the psyche of a nation in difficult times. The downtrodden begin to resent government and wealthy corporations and individuals, seeing them as out of touch with, if not the cause of, their plight. Desperation can lead to a reversal of … END_OF_DOCUMENT_TOKEN_TO_BE_REPLACED