The crash was reported at 3:10 p.m. just west of State Road 331 near DeFuniak Springs, according to the Florida Highway Patrol.

According to a statement from Walton County Sheriff Michael A. Adkinson, Jr., the accident took place near Exit 35 on I-10 in Walton County, Fla., and 20 were taken to four area hospitals with extensive but non-life threatening injuries. 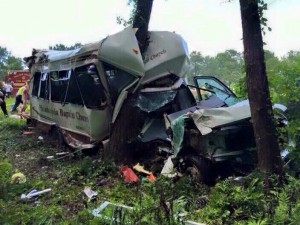 Despite a bus sustaining serious damage during a crash on June 26, none of the youth on board from Philadelphia Baptist Church in Deville had life-threatening injuries. Photo courtesy of Amber Moran’s Facebook page.

us and a passenger van that were traveling with the bus that wrecked. They were taken to DeFuniak Springs Community Center for the night.

“We are so very thankful for God’s grace,” texted Philadelphia Pastor Philip Robertson. “All of our students and adults that were involved in the bus accident have been discharged from the hospital except for three. Two are being held for observation.”

A third person, Madison Bonnette of Deville, received the most extensive injury of the group as she suffered a broke pelvis.

“Please continue to pray for Madison and for all involved,” Robertson’s text read. “The group will be traveling back home tomorrow.”

As news of the wreck got out, a number of churches in the area sent out text and emails asking for immediate prayer for all of those involved. Stewart Holloway, pastor of First Pineville, wrote “please be in prayer for our friends at Philadelphia Baptist Church. Their youth were heading to Florida today one of their buses was involved in an accident.”

Holloway asked every one to pray:

Numerous people also took to Facebook to offer up prayers and words of encouragement.

Amber Moran, Bonnette’s cousin, posted on her Facebook page, “God was watching over them for sure, praise the lord!!”

By Tim Patrick DERIDDER, La. – Many of you know we lost our oldest son in October. David was an IMB (Southern Baptist) missionary. His death gives me an inside view that many of you do not possess. This year, that view carries greater weight than ever. I share this view with you so that (hopefully) you will … END_OF_DOCUMENT_TOKEN_TO_BE_REPLACED