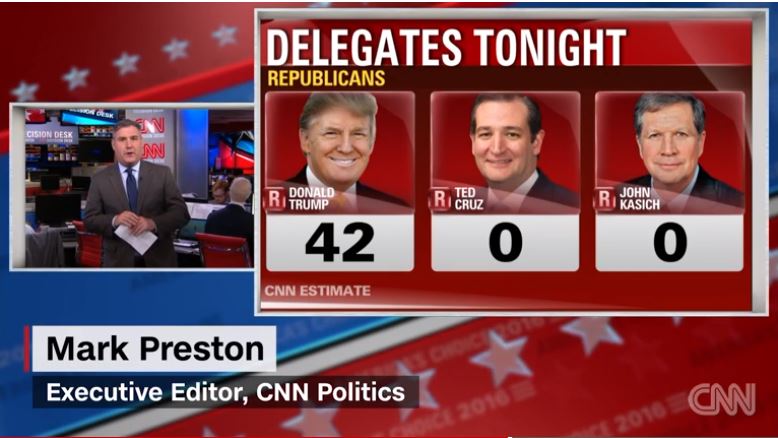 WASHINGTON (BP) — Donald Trump’s striking victory in Indiana May 3 apparently settled the race for the Republican presidential nomination, but it did little to resolve the divisiveness among conservatives and evangelical Christians over his controversial candidacy.

The brash billionaire triumphed easily in the latest primary over both of his rivals for the GOP nomination, leaving him seemingly with no opponents and an open path to the nomination barring a stunningly dramatic development.

Sen. Ted Cruz of Texas announced Tuesday night he was suspending his campaign, and Ohio Gov. John Kasich announced he was dropping out of the race Wednesday afternoon late.

Trump’s candidacy has produced strong resistance from some conservatives and evangelicals — resistance that apparently will continue in the general election. Using the hashtag #NeverTrump on Twitter, objectors have made no-vote promises based on his inconsistent and even harsh policy positions on such issues as abortion, religious liberty and immigration; autocratic inclinations; uncivil, insult-laden rhetoric; and a lifestyle marked by adultery.

Other evangelicals have supported Trump in the primaries or plan to vote for him against the Democratic nominee.

Southern Baptist ethicist Russell Moore, who has chided Trump’s candidacy but not endorsed a candidate, told Baptist Press in written comments, “This is a time for Christians to be sober-minded about where our ultimate citizenship and allegiance are located. No amount of political power can fill the void left by abandoning our Christian convictions, so we must keep praying — both for our country’s political process and for our churches, that we would be faithful embassies of the kingdom.”

Albert Mohler Jr., president of Southern Baptist Theological Seminary, said on his podcast, “The Briefing,” May 4, “Christians in the United States are now going to face a very excruciating set of decisions. Many of us are going to be facing the reality that if Hillary Clinton is the Democratic nominee and Donald Trump is the Republican nominee, we will not be able to vote in good conscience for either” candidate.

Denny Burk — a cultural commentator and professor of biblical studies at Boyce College, Southern Seminary’s undergraduate school — said the #NeverTrump effort “is only just getting started.” Burk, a #NeverTrump advocate, said the GOP candidate must be prevented from winning because he is “not merely a flawed candidate but a real threat to our constitutional order.”

A prominent Southern Baptist pastor, however, said “all true conservatives” should come together to try to defeat Clinton in November.

“Look, people may have their doubts about Donald Trump’s pro-life conversion and his commitment to appoint conservative justices to the Supreme Court,” said Robert Jeffress, senior pastor of First Baptist Church in Dallas. “But as I often say, Hillary Clinton doesn’t even claim a pro-life conversion and there’s absolutely no doubt about what kind of Supreme Court justices she’s going to nominate.”

Jeffress, who counts Trump as a personal friend, has not officially endorsed a candidate but told Baptist Press he has been “very supportive of Mr. Trump and [has] said numerous times, including at his rallies, that I believe he would make a terrific president of the United States.”

Don Cole — a former Southern Baptist pastor in Georgia and a delegate to the 2012 GOP convention — said the voters took charge of the process and supported, in Trump, a candidate who campaigned as an outsider. “They were tired of being called upon to support candidates who were thrust on them by power brokers in the Republican [P]arty,” he wrote in a blog post after the Indiana results were announced.

While he is hopeful, Jeffress told BP he is uncertain “whether politically the breach can be healed” among conservatives and evangelicals.

Bruce Ashford, provost and professor of theology and culture at Southeastern Baptist Theological Seminary, said Trump’s ascendancy gives evangelicals who oppose his candidacy an opportunity to regain their witness by repositioning themselves “as something other than the religious special interest arm of the Republican Party.”

In a Wednesday column for Fox News, Ashford said the evangelical effort should include at least three parts:

— “Second, we now have the opportunity and responsibility to speak with a clear voice on a broader array of policy issues.

— “Third, we can help provide healing for the unhealthy and even toxic nature of American politics and public life.”

Evidence from the primaries shows some committed evangelicals are supporting Trump.

Ed Stetzer, executive director of LifeWay Research, pointed to twin realities regarding evangelicals and Trump. “The more you go to church as an evangelical, the less likely you are to vote for Donald Trump,” Stetzer wrote in an April 15 blog post for Christianity Today. Yet, he said, “the most frequently chosen candidate of church-going evangelicals was Donald Trump.”

An Indiana exit poll showed 60 percent of respondents identified as “born-again or evangelical” Christians, according to CNN. Of those, 51 percent voted for Trump and 43 percent for Cruz. Of the voters who attend worship services more than once a week, 61 percent voted for Cruz and only 33 for Trump. Those attending once a week supported Trump by 49 percent and Cruz by 40 percent.

Cruz, a member of First Baptist Church in Houston, was the nearest competitor to Trump in a Republican race that began with 17 candidates.

Jerry Johnson, president of the National Religious Broadcasters, said in a statement for Baptist Press, “Senator Cruz can leave the campaign trail with his head held high. He’s an honorable man who ran an honorable campaign.

“Cruz also fought the good fight, courageously standing for the sanctity of human life, constitutional conservatism, especially our First Amendment freedom to believe and live our faith,” said Johnson, who endorsed Cruz in his personal capacity. “I am glad he will continue to be a champion for those values in the United States Senate.”

Trump won 53 percent of the vote in Indiana, while Cruz trailed with 37 percent and Kasich with 8 percent, according to The New York Times. The Indiana results brought Trump’s estimated delegate total to 1,013, Cruz’s to 546 and Kasich’s to 153. A candidate needs 1,237 delegates to clinch the nomination on the first ballot at July’s Republican convention.

On the Democratic side, Sanders gained 53 percent of the vote in Indiana, while Clinton took 47 percent. Clinton — the former first lady, secretary of State and United States senator from New York — has 2,221 delegates and Sanders 1,450. A first-round winning democratic candidate needs 2,383 delegates.

By Chuck Kelley Rarely does Hollywood contact a Southern Baptist seminary, but rarely is not never. One day location scouts for a major motion picture to be filmed in New Orleans called NOBTS and asked to tour the campus. They were looking for a place that with a bit of movie magic could be made to look like the … END_OF_DOCUMENT_TOKEN_TO_BE_REPLACED