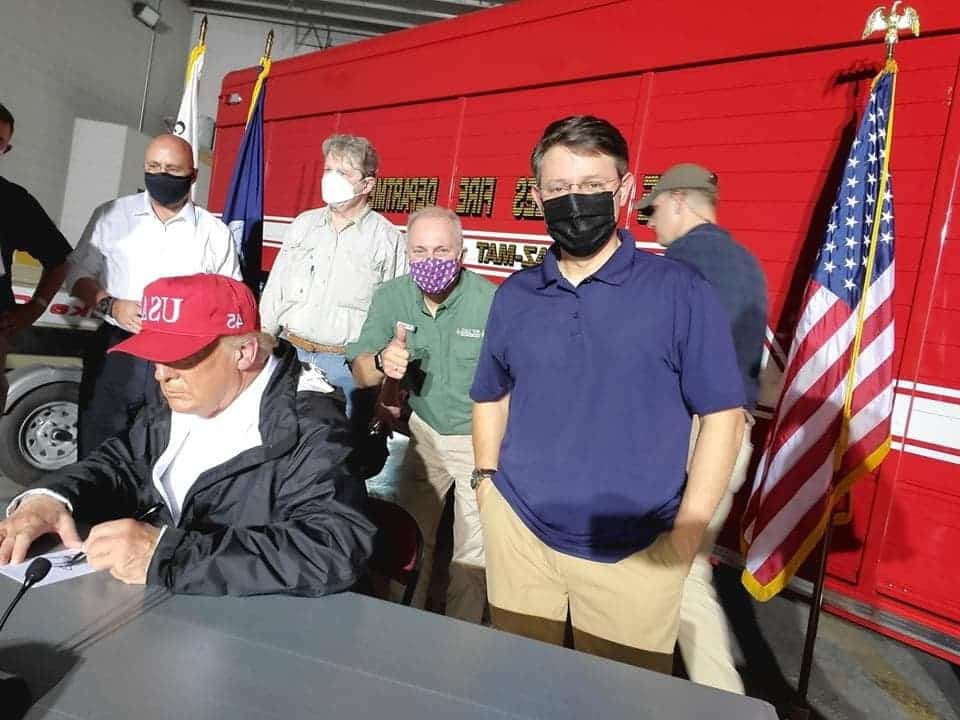 Trump arrived in Lake Charles around noon. He also visited other communities impacted by the storm, which made landfall Thursday in Cameron as a Category 4 hurricane.

“I’m here to support the great people of Louisiana,” Trump said during a roundtable discussion with city, parish and state leaders. “It’s been a tremendous state for me. I love the people. We’ve had a great relationship right from the beginning. It’s very important that I was here; and, already I’ve met some people who have been absolutely devastated. This was a tremendously powerful storm.”

Prior to his visit, Trump approved Gov. John Bel Edwards’ request for a major disaster declaration, which grants federal assistance to those in Allen, Beauregard, Calcasieu, Cameron and Jefferson Davis Parishes, which were severely damaged from Laura.

U.S. Rep. Mike Johnson, a member of the First Baptis Chiurch, Bossier City, was among Louisiana’s congressional delegation which accompanied Trump for the visit.

“It would be difficult to overstate the scope of the hurricane devastation in the Lake Charles area,” Johnson posted on his Facebook page. “Seemingly every single structure is damaged. I spent the day making certain that President Trump, FEMA Director Chad Wolf, and the top White House staff understand that what we witnessed in Calcasieu Parish is being experienced in many of our other parishes as well. They get it, and they have all committed to do everything humanly possible to help us NOW.”

“I’m thankful that President Trump has acted so quickly to help Louisianians recover and rebuild,” Kennedy said in a statement. “The damage that Hurricane Laura has done to our state is breathtaking. I was able to get a bird’s eye view of the impact on Lake Charles today, and much of the area is still under water. Even in the middle of great suffering, though, our people are tough, and our people are grateful for this aid.”

By Bill Britt HAUGHTON, La.  – Of all people, the Apostle Paul could have legitimately complained about the circumstances that he endured throughout his life. When we look back to the beginning of Paul’s journey as a believer, we see that he received a message from the Lord that illuminated the path he was … END_OF_DOCUMENT_TOKEN_TO_BE_REPLACED