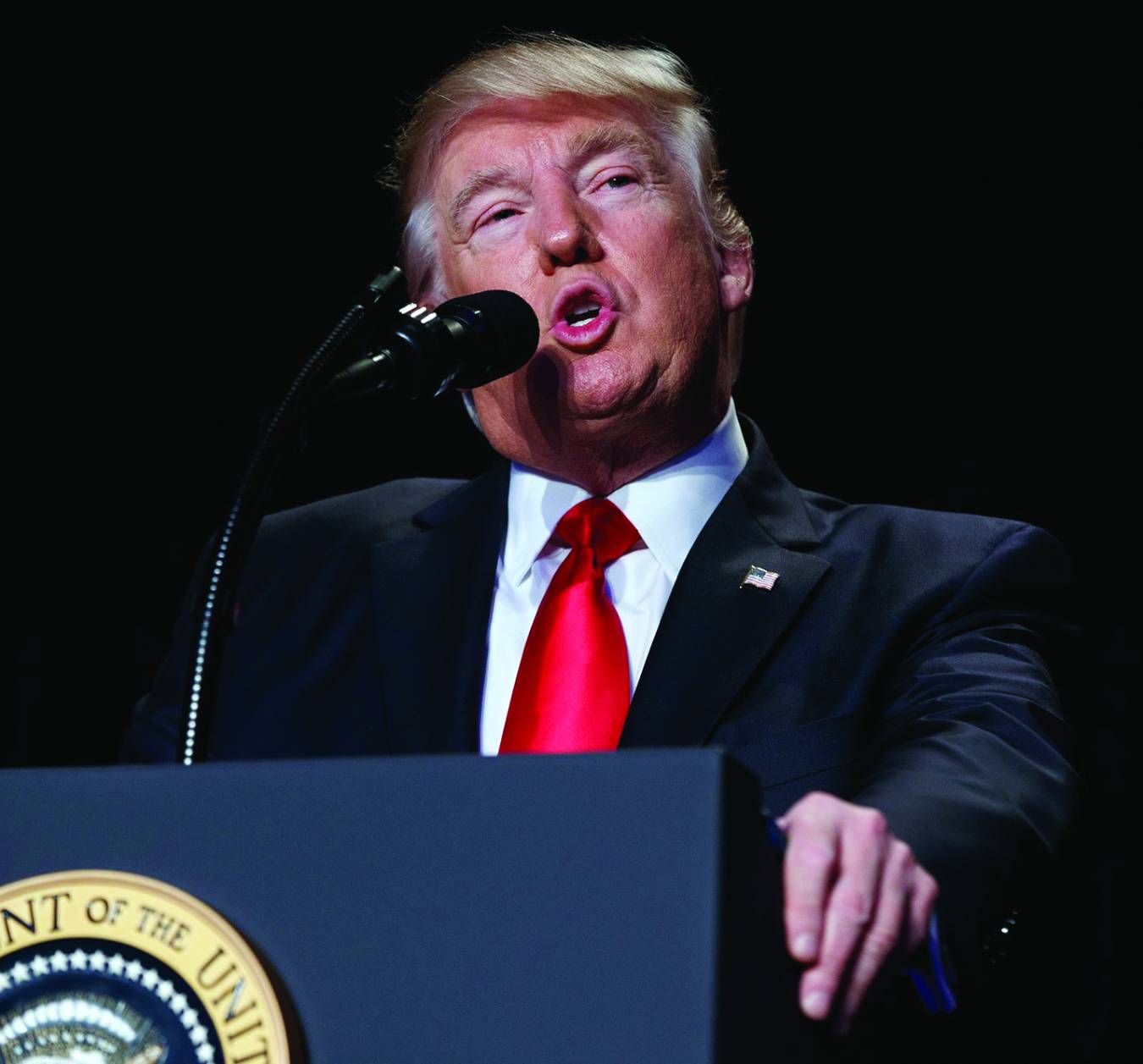 President Trump vowed Thursday to “defend and protect” religious liberty on multiple fronts – describing his recent immigration executive order as part of that goal – during his first appearance as president at the traditional National Prayer Breakfast.

But a look at his nominees for cabinet posts shows the president has gone beyond just the minimum in keeping his promises to evangelicals — 12 of his top 23 advisers, cabinet leaders and cabinet-level officials, are avowed Christians.

Tony Perkins, president of the Family Research Council, a Christian public policy ministry in Washington, D.C., said in an FRC news release he was pleased to witness the president “follow through on his promise and select a nominee from the list he presented during the campaign.”

That final list contained 21 names — 10 persons were identified by Trump in May 2016 and 11 more candidates were added, including Gorsuch, 4 months later at the request of conservative groups. All 21 individuals were described as strict interpreters of the Constitution.

In an email to the Baptist Message, Johnson said he was happy with the nomination and described Gorsuch as “an exceptionally qualified individual, with a proven record on issues ranging from the sanctity of human life to religious liberty to the Second Amendment.”

“He’s a conservative originalist who believes in interpreting our Constitution in the way our Founders wrote it,” he tweeted.

Trump’s naming of Gorsuch, an active member of St. John’s Episcopal Church in Boulder, Colo., is a capstone of sorts for a spate of nominations the president has made that are favorable to Christians’ interests.

In fact, his naming of former Georgia Gov. Sonny Perdue, a Southern Baptist, as Secretary of Agriculture to complete his cabinet picks, highlights the exceptional influence Christians have in his administration, with the possibility of reshaping America significantly.

In all, nine of 16 presidential cabinet members, including the vice president, are acknowledged as active members of the Christian faith – although not all are evangelicals in the broad range of Christian traditions that are represented. Meanwhile, Christians have been named to three of seven other positions considered cabinet-level, but not actual cabinet posts.

See a list of cabinet and cabinet-level Christian nominees at the end of this article.

Such remarkable favor for Christians in the Trump administration has caused outside observers to take note, including O.S. Hawkins, president of GuideStone Financial Resources of the Southern Baptist Convention, the nation’s largest Christian-screened mutual fund family with $10.4 billion in assets.

In a Jan. 17 tweet Hawkins wrote, “No President Elect has appointed more qualified and outspoken followers of Christ in history – time for NeverTrump evangelicals to acknowledge this.”

Hawkins was highlighting the obvious split among Christian leaders about evangelicals’ support for Trump – a divisiveness that largely did not develop among the evangelical faithful, who supported Trump with a record 81 percent of their votes.

However, among religious leaders, some made their objections to Trump very public and harsh, even condemning other evangelicals who differed with them about the election.

Moore attacked Trump regularly from Sept. 2015 through May 2016, when Trump finally responded on Twitter, calling Moore “a nasty guy with no heart” and “a terrible representative of Evangelicals and all of the good they stand for.”

But Moore also blasted 1, 000 evangelical leaders who met with Trump in June 2016 for a “dialog” to ask questions and express concerns, and throughout the campaign made references to such leaders as “the Old School Religious Right establishment.” At one point he degraded such leaders as “doctrinally vacuous” compared to his cohort of followers (largely millennial neo-Calvinists) whom he praised as “gospel-centered Christians,” in a piece he penned for the Washington Post.

Moreover, he also lashed out at the larger evangelical community which supported Trump, writing in a different Washington Post article that “this election makes me hate the word ‘evangelical’” – and he even made the wholesale accusation that Trump’s evangelical base “may well be drunk right now, and haven’t been into a church since someone invited them to Vacation Bible School sometime back when Seinfeld was in first-run episodes.”

Now, it appears Moore has boxed himself out of having any influence with the White House.

So far, since Trump’s inauguration, Moore’s only apparent communication with the Oval Office has been what amounts to an open letter published by the Washington Post, expressing Moore’s complaints with the president’s executive order which places a moratorium on travel for persons from seven countries known for harboring jihadists and, in some cases, for training jihadists to deploy to Western nations.

Former Arkansas Gov. Mike Huckabee, a Southern Baptist pastor and former president of the Arkansas Baptist Convention, was among the first to make an overture to Trump, and after dropping out of the presidential race, became a constant presence in the Trump camp and reportedly a regular prayer and Bible study partner.

— Richard Land, president of Southern Evangelical Seminary in Charlotte, N.C., and the former president of the Ethics & Religious Liberty Commission;

— Jay Strack, founder and president of Student Leadership University, and a former president of the Conference of Southern Baptist Evangelists.

But perhaps no one has had as much visible influence on the new presidential administration as Tony Perkins, through his leadership of the Family Research Council.

The presidential transition team is organized into two spheres of focus: policy implementation and agency action.

Twelve policy implementation teams are writing directives to guide the executive branch on such matters as healthcare reform, Veterans Administration reform, defense and national security policy and how this administration will approach the protection of Americans’ constitutional rights, for instance.

Meanwhile the agency action group, which is divided into six areas of responsibility, will identify qualified personnel to serve in almost 4,000 jobs now open in the administration – and two of these six areas are led by individuals with direct ties to the Family Research Council. Combined, these two advisers will oversee appointments in 12 of 27 departments in the new administration:

— Former Ohio Secretary of State Ken Blackwell previously served as an FRC Senior Fellow. He is leading the domestic issues team for Trump and is responsible for personnel assignments to the Departments of Agriculture, Education, Energy (and the Nuclear Regulatory Commission), Environmental Protection Agency, Health and Human Services, Housing and Urban Development, Interior, Labor, and Transportation.

WHAT’S NEXT FOR SOUTHERN BAPTISTS?

In an interview with the Baptist Message, Rep. Johnson described President Trump’s team as “the strongest cabinet, perhaps ever,” and also made note of the favor Christians now enjoy with the White House. “God has spared us and He’s given us this opportunity, and now we have to be faithful. We have to do our duty.”

“The only way to get America back on the right track is to live out our principles in the public square — share the Gospel and be salt and light in every arena, including the arena of the government and public policy,” he explained.

Johnson shared an anecdote about the vice president to make his point, referencing comments made by Mike Pence to Republican lawmakers at an event in Philadelphia, Pa., Jan. 26.

“He was talking about how humbling it was to take his oath on the Bible that was owned by Ronald Reagan,” Johnson recounted. “He was handling it very gently, of course, and he said he opened the front of the Bible and saw on the inside cover where Ronald Reagan had inscribed in his own hand the words of 2 Chronicles 7:14. He closed his remarks to us by saying, ‘If we will be faithful, we can make America great again, by God’s grace, and as the Scripture says “He will heal our land if we’ll do our part.”’”

That is the challenge, Johnson said.

“We recognize that we have an affirmative obligation to advance the principles of righteousness, truth and brotherly love in the culture — and if we are faithful to fulfill that obligation, God will honor our obedience.”

Some material involving Rep. Johnson was excerpted from a previous Baptist Message article. The following list identifies active Christians who have been named to serve on President Trump’s cabinet and in other cabinet-level positions.

— Former Indiana Gov. Pence was a member of Grace Evangelical Church in Indianapolis until 2012, but he and his family have been attending the non-denominational College Park Church in North Indianapolis since about 2013, although they are not members there.

— Perdue attended First Baptist Church in Woodstock, Ga., while living in Atlanta, but after completing his second term as governor he and his wife moved to Warner Robins, Ga., where they are active members with Second Baptist Church.

— Sen. Jeff Sessions of Alabama has been named as Trump’s candidate for U.S. Attorney General. His official biography indicates he “has served as a lay leader and as a Sunday schoolteacher” at Ashland Place United Methodist Church in Mobile, Ala.

— Betsy DeVos, nominee for Secretary of Education, has ties to the Christian Reformed Church in North America, a Calvinistic denomination in the United States and Canada, and she served as an elder at the non-denominational Mars Hill Bible Church in Grand Rapids, Mich.

— Former Texas Gov. Rick Perry, slated to head up the Department of Energy, was raised in the United Methodist Church. But in 2010, he and his family began worshiping with the Lake Hills Church, an evangelical non-denominational congregation in Travis County, Texas.

— Former Secretary of Labor Elaine Chao, who served in both terms for President George W. Bush, has agreed to be President Trump’s secretary of transportation. She and husband Sen. Mitch McConnell, the Senate majority leader, are 16-year members of Southeast Christian Church in Louisville, Ky., that affiliates with Independent Christian Churches.

— Secretary of State Rex Tillerson, the former Exxon Mobil chairman and CEO, belongs to the National Association of Congregational Christian Churches, a mainline Protestant denomination that emphasizes congregational autonomy. He and his wife reportedly attend services weekly and he teaches Bible study.

— Neurosurgeon Ben Carson, who has been tapped as Secretary of Housing and Urban Development, is a faithful adherent of the Seventh Day Adventist Church which observes Saturday as the day of worship.

— Congressman Tom Price, an orthopaedic surgeon, already has completed confirmation hearings to serve as Secretary of Health and Human Services. He and his wife live in Roswell, Ga., where they attend the Roswell Presbyterian Church.

— White House Chief of Staff Reince Priebus previously served as chairman of the Republican National Committee. He and his wife are members of Grace Church (known as Grace Baptist Church from 1922-1998) in Racine, Wis.

— South Carolina Gov. Nikki Haley is the nominee for U.S. Ambassador to the United Nations. She was raised as a Sikh and continues to honor her heritage even though she converted to Christianity and is a member of Mt. Horeb United Methodist Church in Lexington, S.C.

— Oklahoma Attorney General Scott Pruitt is a Southern Baptist who serves as a deacon at First Baptist Church in Broken Arrow, Okla. He has been nominated to lead the Environmental Protection Agency.

By Chuck Kelley Rarely does Hollywood contact a Southern Baptist seminary, but rarely is not never. One day location scouts for a major motion picture to be filmed in New Orleans called NOBTS and asked to tour the campus. They were looking for a place that with a bit of movie magic could be made to look like the … END_OF_DOCUMENT_TOKEN_TO_BE_REPLACED