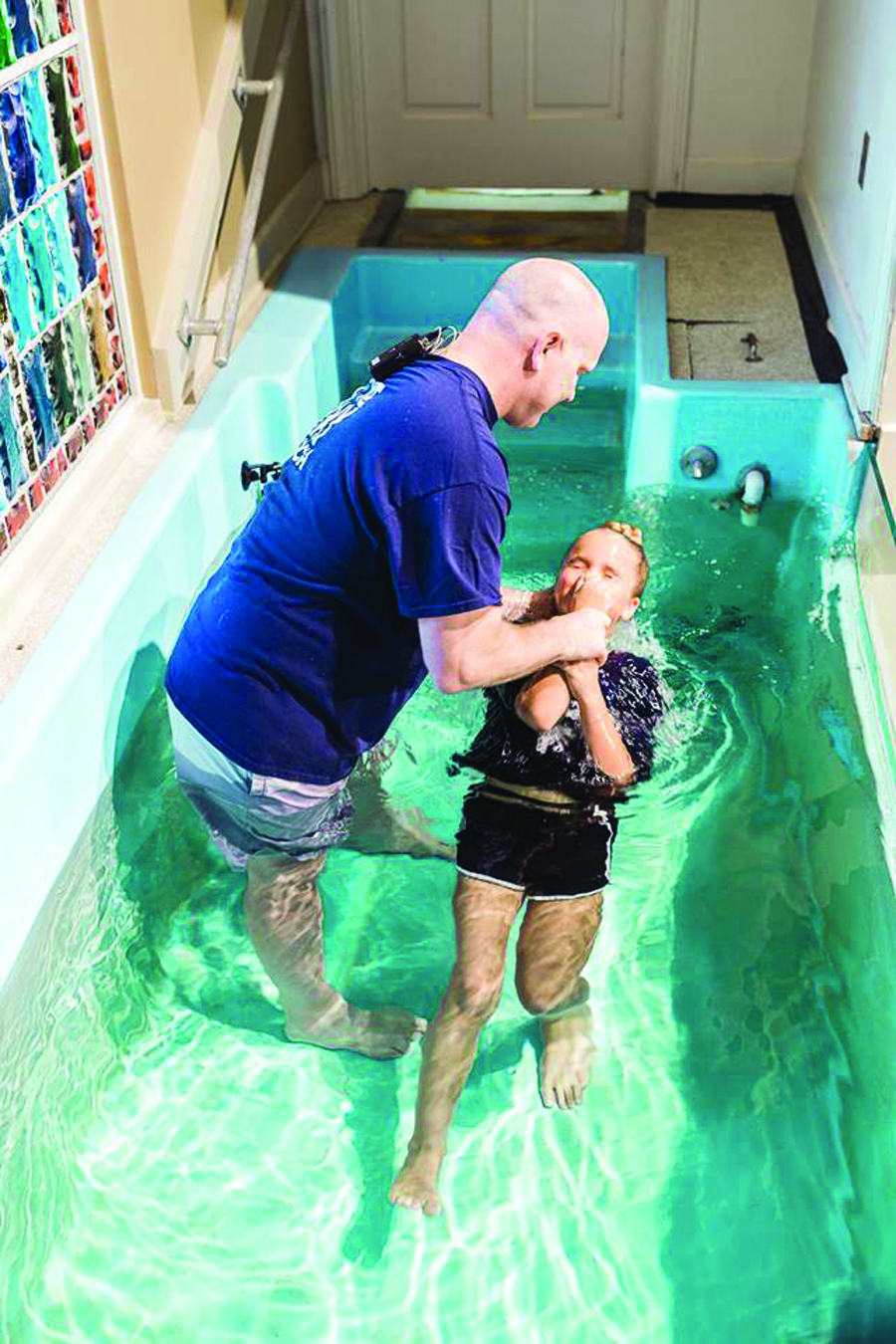 A young girl is baptized by Executive Pastor J.J. Cox during a worship service Nov. 5 at First Baptist Church in Moss Bluff. The church has baptized 65 people in 2017. To celebrate each baptism, the church lights a bulb in a mural to help spell out the word ‘life.’ Last year the word was ‘believe.’

MOSS BLUFF (LBM) – While the outer bands of Tropical Storm Harvey caused a tempest in the Gulf of Mexico as it approached southwest Louisiana Aug. 27, three people at First Baptist Church in Moss Bluff were troubling some waters in their own way.

Becky Toney was immersed after proclaiming her profession of faith, just moments before the same experience was celebrated by Carli Beth Sharpton and Nadyah Bustillo, two young girls she had counseled four months earlier about salvation, an encounter God used to bring her to obedience with regard to baptism.

Toney had surrendered her life to Christ in 2014, but had to be baptized.

“God led me to speak to one of the girls and then little by little He started revealing to me my need to get things straight and in the right order,” Toney said. “That’s when I was convicted that now was the time to follow through with obedience.”

The three baptisms are among 65 that First Baptist Moss Bluff had recorded for the first 10 months of 2017. The church acknowledges each symbolic act with the symbolism of lighting a bulb in a display of lights that spells out the word ‘life.’

Pastor Steve Bennett said the congregation has caught on to this idea for celebrating others being born again.

“We set out as a staff and looked at a word that relates to the life we have in Christ,” Bennett said. “Our people rejoice with clapping and enthusiastic joyful words when one is baptized because we know that it is the public beginning of a lifetime of walking with the Lord. Most remember their public declaration of faith when another is baptized.”

Since Bennett became their pastor in 2013, the congregation has witnessed 321 baptisms, according to the Annual Church Profile database. Sunday morning worship attendance also has increased, growing from 643 regular attenders to 1,229.

First Baptist Moss Bluff is a leader in growth among most Southern Baptist churches in North America, according to a report by New Orleans Baptist Theological Seminary Professor Bill Day.

According to Day, a healthy, growing church is one that has experienced 10 percent growth over a five-year period, recorded at least one baptism annually during that timeframe and saw an attender to baptism ratio of 15:1, or less.

Lane Corley, a church planting strategist for Louisiana Baptists, said research showed that in 2015, only 5.4 percent of the more than 46,000 SBC churches in North America were healthy and growing by that definition. The same trend is true among the 1,650 Louisiana Baptist congregations, he said.

One reason for the growth of First Baptist Moss Bluff is the emphasis on small groups and evangelism, said Beau Guidry, director of small groups at the church.

Members of the more than 40 small groups that meet at the church and in homes make outreach into the community a top priority. These outreach efforts have included block parties, coordinating camps for children and youth and sending mission teams both in Louisiana and beyond.

“These groups are relational, accountable, safe and discussion driven,” Guidry said. “A key in both home groups and Sunday School is multiplication. As groups grow there is a need to multiply into two or three. In order to do this, there must be a multiplicity of leaders within each group. Growing groups are healthy, therefore they create leaders from within themselves.

“Through home groups we have seen adults saved, baptized and beginning to serve,” he continued. “In home groups we have seen people saved, baptized, had big and small prayers answered, marriages healed and good solid Biblical community and everything that goes along with it take place. These small groups have created an army of people to serve and reach out to so many in our community and impact our area for Christ.”

By Waylon Bailey Recently, I saw a tweet on Twitter that asked the question, “What would Jesus do in the midst of a worldwide pandemic?” No answer to the question was given, but the author obviously had an agenda and a suggested answer. The good news is that it led me to really ask, “What would Jesus … END_OF_DOCUMENT_TOKEN_TO_BE_REPLACED