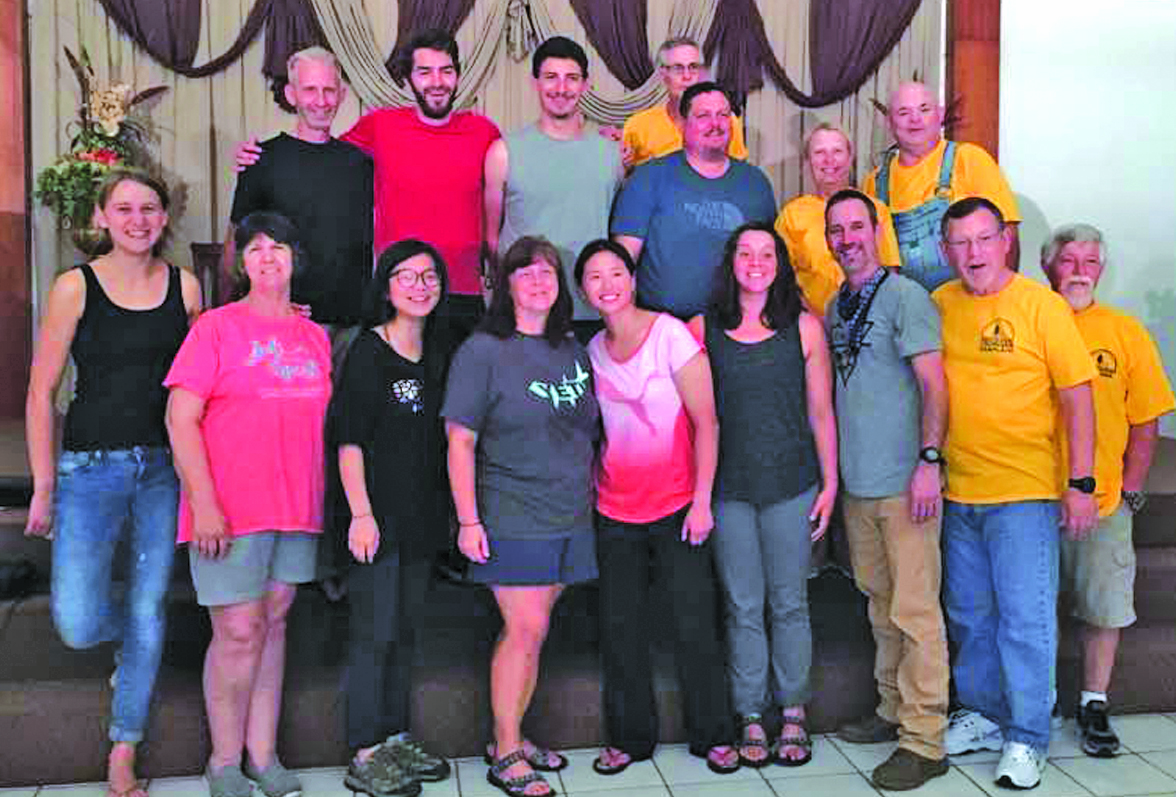 A Louisiana Baptist Disaster Relief team worked alongside a team of college students from the Canadian National Baptist Convention and a missionary from the International Mission Board during their recent trip to Puerto Rico. The team witnessed 14 people accept Christ while there.

They worked alongside six college students from the Canadian National Baptist Convention and a missionary of the International Mission Board, performing a variety of tasks to help meet physical needs of the island’s residents during the eight-day trip, but also attending to the peoples’ eternal needs.

“Very quickly we realized the Holy Spirit had gone before us to prepare the hearts of those we encountered,” Bruce Worrell, pastor of Sherwood Baptist Church in Baton Rouge, told the Baptist Message. “Although we met some strong believers in Christ, most of those we encountered had no assurance of salvation. But they were ready to hear what the Word of God said, and they listened attentively to the plan of salvation, and asked through genuine repentance for God to forgive them of their sins.

“They acknowledged Jesus as the Son of God, crucified and risen from the dead,” he continued. “Then they asked Him to be their Lord and Savior.

“We planted even more seeds through witnessing, and handing out New Testaments and Tracts,” Worrell added. “In it all, we give God the glory, honor, and praise for what He did in their lives.”

While in Puerto Rico, the team placed tarps on damaged roofs and used chainsaws to cut through debris, and, they distributed 200 pounds of beans and 200 pounds of rice to families.

The volunteers also served meals alongside members of the Rio Chiquito Baptist Church, whose building served as a temporary home for the disaster relief unit. The building did not have electricity, but the team produced drinking water using a gravity purification system.

Worrell said there was some concern the first two days there, when no one responded to the Gospel. But, on the third day, he said, 12 people accepted Jesus.

Among the more memorable encounters for Stan Statham, director of missions for Baptist Associations of Southeast Louisiana, was the conversion of four people at homes the team visited to place tarps on roofs. At one house, the team led a grandmother, Carmel, and her granddaughter, Ileanette, to Christ. The next day, members returned with a supply of beans and rice. Ileanette’s husband, Ramon, and his friend, Ruben, were there to take possession of the food but in the end received an even more precious gift – a relationship with Christ.

“We checked on them physically to see what we could do,” he said. “If they needed food we provided the beans and rice. That just naturally led to a spiritual conversation.

“It was like the Lord sent us to the right people where He wanted us to be,” Statham said. “It was neat to see the Lord work.”

Statham said another special memory was witnessing a father and son accept Christ on their front porch. As the two men were led to a relationship with Christ, the wife, who already was a Christian, was speechless.

“When we began to witness to her husband, she had tears of joy,” Statham said. “When he asked the Lord to save him, she was just excited. It was like she had been waiting for it to happen for years.”

“We were able to accomplish what we set out to do, and to see many changed lives” Arnold said. “The pastor and the church were very excited as we celebrated together all God did through us that week.”

By Waylon Bailey Recently, I saw a tweet on Twitter that asked the question, “What would Jesus do in the midst of a worldwide pandemic?” No answer to the question was given, but the author obviously had an agenda and a suggested answer. The good news is that it led me to really ask, “What would Jesus … END_OF_DOCUMENT_TOKEN_TO_BE_REPLACED