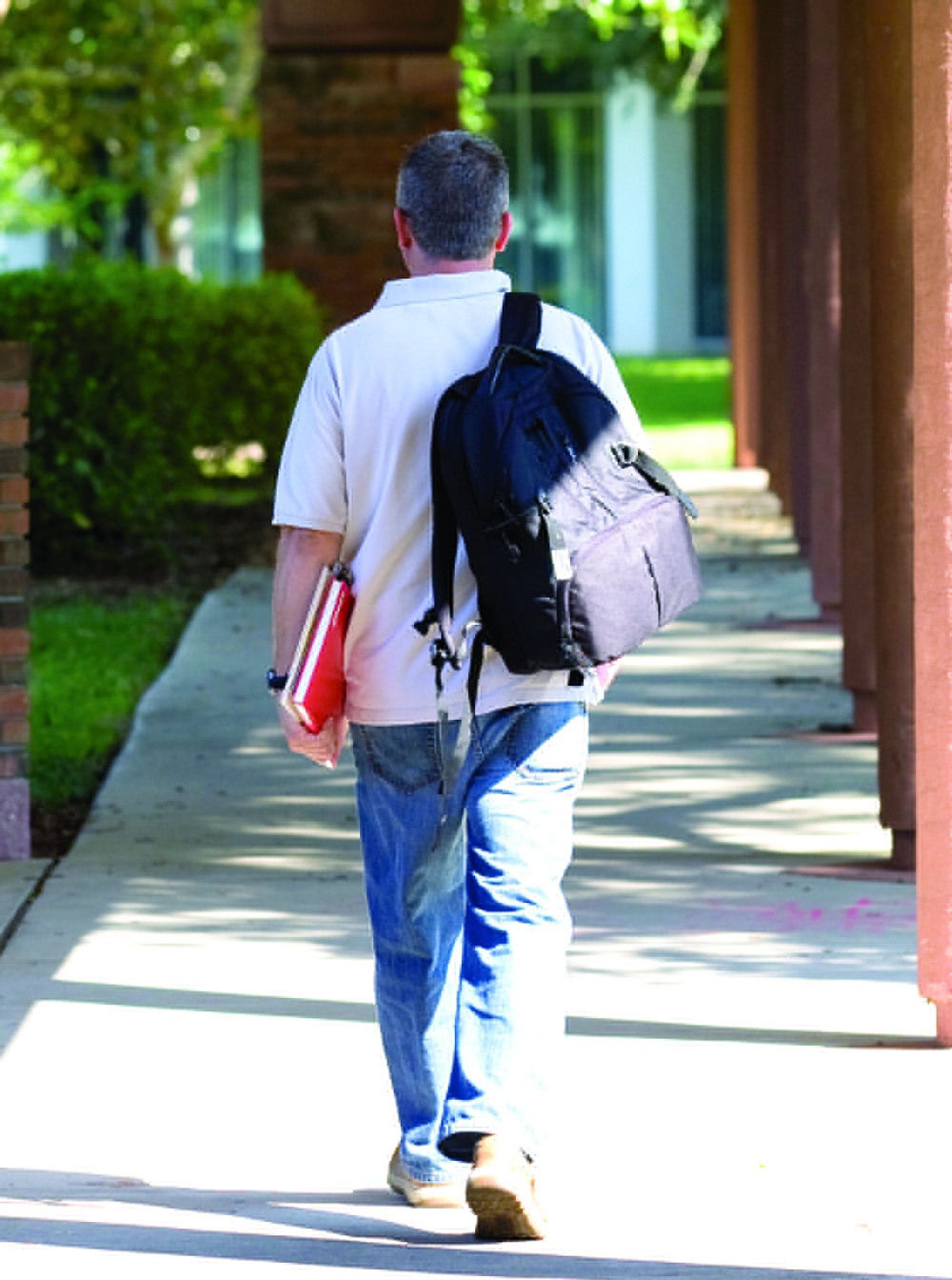 A middle-aged student walks to class. Louisiana college and New Orleans Baptist Theological Seminary train students to make a difference for Christ in a culture that is increasingly hostile to the Gospel.

They are two Southern Baptist institutions of higher learning in Louisiana, with a different type of student they educate, their location and the enrollment numbers.

But despite their differences, Louisiana College and New Orleans Baptist Theological Seminary have one end result – training students to make a difference for Christ in a culture that is increasingly hostile to the gospel.

Originally named Baptist Bible Institute, NOBTS was founded in 1917. An act of the SBC Annual Meeting created the seminary as a way to evangelize the city of New Orleans. The school now has extensions in Shreveport, Monroe, Lafayette, Baton Rouge, Angola Prison and Louisiana Correctional Institute for Women. Enrollment stands at 3,800 this year, and the school is a training school for ministers.

Why does a student pick a Christian-based school over a university that is secular in nature?

Steve Lemke, provost at NOBTS, said that he encourages the typical-college aged student to attend a Baptist college because the baccalaureate training available at Baptist colleges is comparable in quality to that at any secular university.

“However, the Baptist college also offers two significant additional advantages: the Christian environment at the Baptist college, which is of great importance, and the education is presented within a Christian worldview rather than the worldview presented in some secular colleges that is increasingly hostile to Christianity,” Lemke said. “We do need strong Christians in our state colleges, and we are thankful for our BCMs who minister to these students. These students are missionaries in these secular universities.”

Seminary is designed specifically for students who feel called into ministry. The seminary enrollment has nearly doubled from about 1,900 in 1997 to now more than 3,800. In fact, a recent report by the seminary’s accrediting agency the Association of Theological Schools found that 37 percent of its 100 schools have grown in the past five years. New degree programs and delivery systems were among reasons for that growth.

ATS Executive Director Daniel O. Aleshire said in the report, “The seminaries supported by American denominations are all unique in different ways. Southern Baptist seminaries are unique in that, with the exception of Southwestern, they rim the primary population base of the SBC: southern Louisiana, eastern North Carolina, northern Kentucky, Kansas City, and California. The seminaries of every other denomination are located in the heart of the population area of the denomination.”

NOBTS also saw an increase in students taking online courses. Through early April, the seminary reported that 1,233 students have taken at least one Internet class. That’s an increase from the 295 students who took Internet courses in 2004-05. Many NOBTS students chose courses not from a single delivery system but a mixture of delivery systems – including the New Orleans campus, extension centers, or online.

Lemke said the online model has become a significant part of every institution because of convenience for today’s student.

“I think both faculty and students alike prefer a teaching environment in which they can have face time to interact personally in a classroom,” he said. “Ministry is a people business, and therefore a more interpersonal training is helpful for ministry training. That is why we require an interpersonal skills class in our curriculum.

“However, many students have found that an online environment pushes them (particularly less outspoken students) to participate in discussions, and it gives them time to think about what they want to say,” he continued. “Faculty engagement with each student is actually much higher in online classes than in a classroom setting.”

At LC, university administrators say that the combination of a Christian worldview and academic excellence are the qualities that separate the school from secular universities in the state.

“Students choose Louisiana College because of our reputation for academic rigor and excellence, as well our foundational Christian worldview,” said LC President Rick Brewer. “Parents of students understand, too, the value of this preferable blended approach, which provides a learning and growing environment markedly different from other colleges and universities in Louisiana.

“Indeed, our faculty are mentors who engage the minds and inspire the hearts of LC’s students,” he said. “The differentiating value proposition for Louisiana College is expressed in the faculty/student relationship emphasizing a healthy balance of intellectual growth and spiritual development.”

With the possibility of deep cuts to the state’s colleges and universities, students at those schools could end up paying more in tuition. Brewer said that students may forget that LC is actually affordable compared to other schools in the state, like LSU and Tulane.

“Unfortunately, there is a false impression that Louisiana College is too expensive to attend because it is a private school,” Brewer said. “However, comparing tuition and fees with some of the most popular universities and colleges in Louisiana shows that we are very competitive with those institutions.

“But we are even more affordable than that because Louisiana College offers scholarship opportunities that are not available from state schools,” he continued. “When one anticipates the state’s budget cuts in education, then Louisiana College becomes the best value for those who desire premiere academics in a God-honoring setting.”

LC Junior Caleb Willis of Leblanc said a long family history of LC graduates combined with the personal touch and Christian education are all reasons why he chose to study in Pineville. He said the caring attitude of his professors in particular helped make his choice to attend there.

“Every professor genuinely cares about your education but is also adamant that you receive a quality education that is rigorous,” said Willis, who also is minister of music at Tioga First Baptist Church. “It is so easy to talk to your professors one on one and many professors become your friends. Earlier this semester, one of my professors went disc golfing with me and a friend and then had us come to his house for supper.

“The staff at LC overflow with the love of Christ and also provide the gospel to people who have never truly heard it,” he said. “I am in the music education program at LC and both departments have been extraordinary in helping me to learn about my field. LC is the perfect place if you are looking for a solid Christian education with a personal touch.”

By Chuck Kelley Rarely does Hollywood contact a Southern Baptist seminary, but rarely is not never. One day location scouts for a major motion picture to be filmed in New Orleans called NOBTS and asked to tour the campus. They were looking for a place that with a bit of movie magic could be made to look like the … END_OF_DOCUMENT_TOKEN_TO_BE_REPLACED