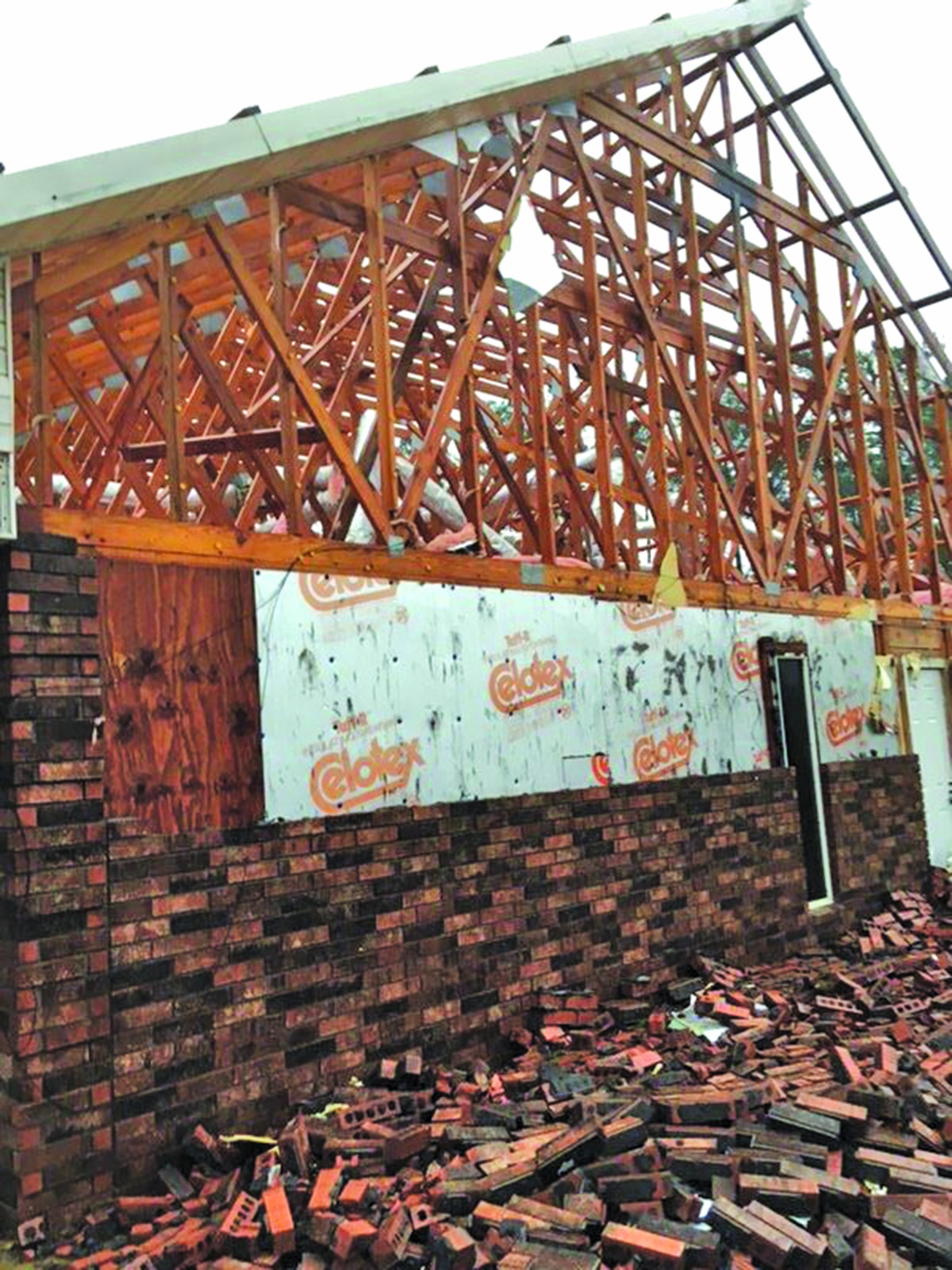 A massive tornado cause extensive damage to Gravel Hill Baptist Church in Clavins, La. Pastor Anthony Eaves said the Fellowship Hall and the parsonage were total losses. He is awaiting word on the Sanctuary which sustained structural damage.

According to the National Weather Service, one of those tornados traveled 63 miles – from DeRidder to Alexandria – causing widespread damage in its path, and one confirmed fatality. The fatality took place as the tornado passed through Rosepine, located in the eastern portion of Vernon Parish.

Two Southern Baptist Churches, along with numerous homes, and businesses sustained moderate to significant damage in the tornado’s wake.

“We have called all of our churches from Pitkin to Boyce checking on them. As of right now, Gravel Hill Baptist Church in Cravins, and Marlow Baptist Church, Leesville, are the only two that sustained any damage,” said John Hebert, Louisiana Baptists’ Director of Missions and Ministry. 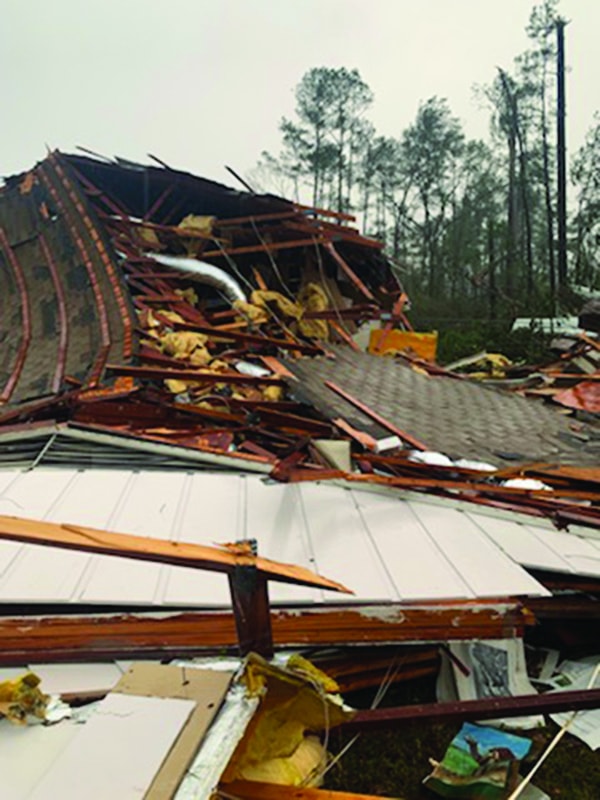 “Gravel Hill appears to be a total loss as the fellowship hall and the parsonage wasere both destroyed. The sanctuary sustained heavy damage but we won’t know how much until an engineer can get in there in the morning.

“I have spoken with Anthony (Pastor Anthony Eaves) and he is just now getting to the church because of all the downed trees, power poles and lines on the road,” Hebert continued.

“The roof is totally gone on our fellowship Hall/Sunday School rooms,” Eaves told the Baptist Message. “Likewise the parsonage is totaled.

Pastor Anthony Eaves says he has never seen or experienced the damage caused by a Dec. 16 tornado that hit his church.

“Not sure yet about the sanctuary,” Eaves continued. “The back wall has buckled outward, our steeple is gone and we have damage to our front, especially our columns. An engineer will have to come out and tell us if the building is structurally sound. If not, and the sanctuary can’t be saved, then we have lost everything.”

Eaves, though, is thanking God nobody was injured or died in the storm.

“I’ve never experienced anything like this. It is going to take time to sort through what to do next,” he said. “I am just so thankful for God’s protection on the people in and around our church.”

“I have tried to speak with Tim Patrick (pastor of Marlow Baptist Church and Director of Missions for Beauregard Baptist Association) but the cell coverage is spotty and I am sure there is a lot of debris to maneuver as well. From what I understand, they lost their steeple and lost some of their awning.”

The areas of Cravens, Marlow, and John Brewer and Borel roads, east of Rosepine, were the hardest hit in Vernon Parish according to officials.

“Beginning tomorrow we will do an early set up at First Baptist Pitkin,” said Hebert. “They have power plus room to house and feed the crews. We have one crew already coming from Lake Charles and several others on standby.”

The powerful storms made roads impassable, tore up structures, and damaged cars and trucks according to the Beauregard Parish Sheriff’s office, which received numerous reports of damage in the eastern and northeastern portions of the parish.

A Facebook post by Tommy and Heather Welch, who live near Rosepine in Vernon Parish, showed a large tornado on the ground. It was in that same area that one person lost their life according to the Vernon Parish Sheriff’s office. 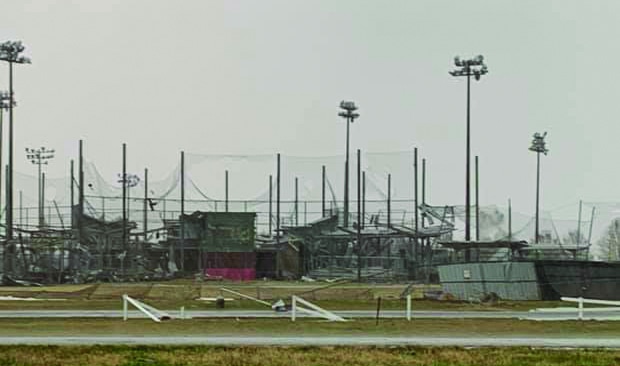 The Johnny Downs Sports Complex in Alexandria took a direct hit from a tornado on Dec. 16.

As the storms pushed eastward during the afternoon and through the evening, additional areas will likely be impacted according to the Governor’s Office of Homeland Security and Emergency Preparedness (GOHSEP). The agency has activated its Crisis Action Team (CAT) due to the ongoing outbreak of severe weather across the state.

The most significant damage seems to have been west of Alexandria along Highway 28 W.

A Facebook video posted by the Fire Department at Alexandria International Airport showed the size and power of the tornado which went along Hwy 28 West. The airport sustained no damage according to officials.

Rapides Parish Sheriff William Earl Hilton, a member of Homewood Baptist Church in Alexandria, said in an interview with KALB-TV he has not witnessed devastation like he observed Monday since he was a little boy.

“There is major, major, major damage to this area out here,” Hilton told the KALB reporter. “When I was a small boy, I saw something over in the eastern part of Vernon Parish that was this bad. It wasn’t this big of an area then but I have never seen anything as big as this.” 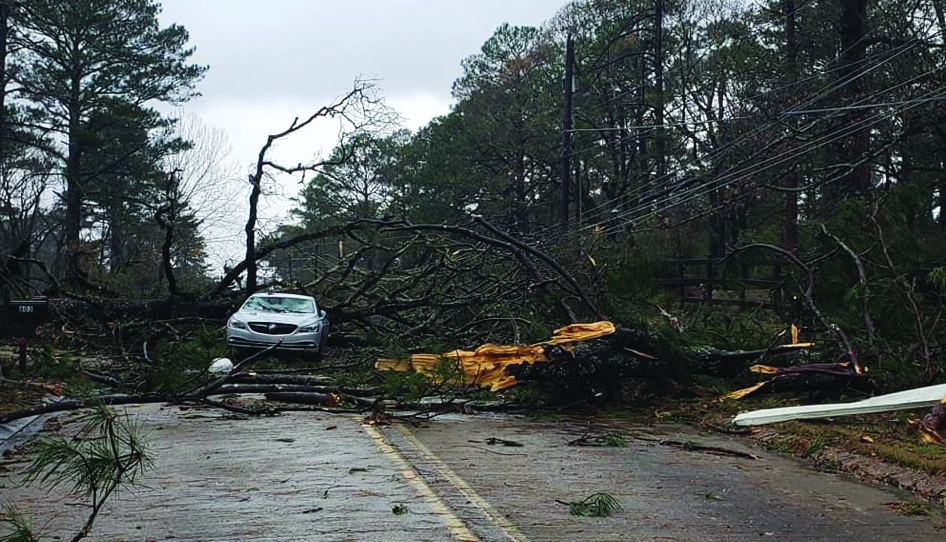 Tornado damage in Pineville, across the Red River from Alexandria, was widespread with a lot of trees and power lines down.

Across the Red River in neighboring Pineville, the Pineville Police Department reported that the Donahue Ferry, Edgewood Drive, Myrtlewood Drive and Fairview Lane areas of Pineville along with Pineville High School received major damage from the high winds which left roads littered with multiple trees and downed power lines.

According to the National Weather Services, another tornado was located around 10:30 a.m. near Cotton Valley. It destroyed several homes while knocking down a lot of trees and power lines in the area.

A woman, whose home was destroyed by the tornado, was taken to the hospital.

By Waylon Bailey One of the most exciting stories in the life of Jesus occurred in his home town of Capernaum. As Jesus taught in what may have been the house of Simon Peter, four men carried their paralytic friend to the rooftop, tore the roof away, and lowered their friend right in front of Jesus. You … END_OF_DOCUMENT_TOKEN_TO_BE_REPLACED