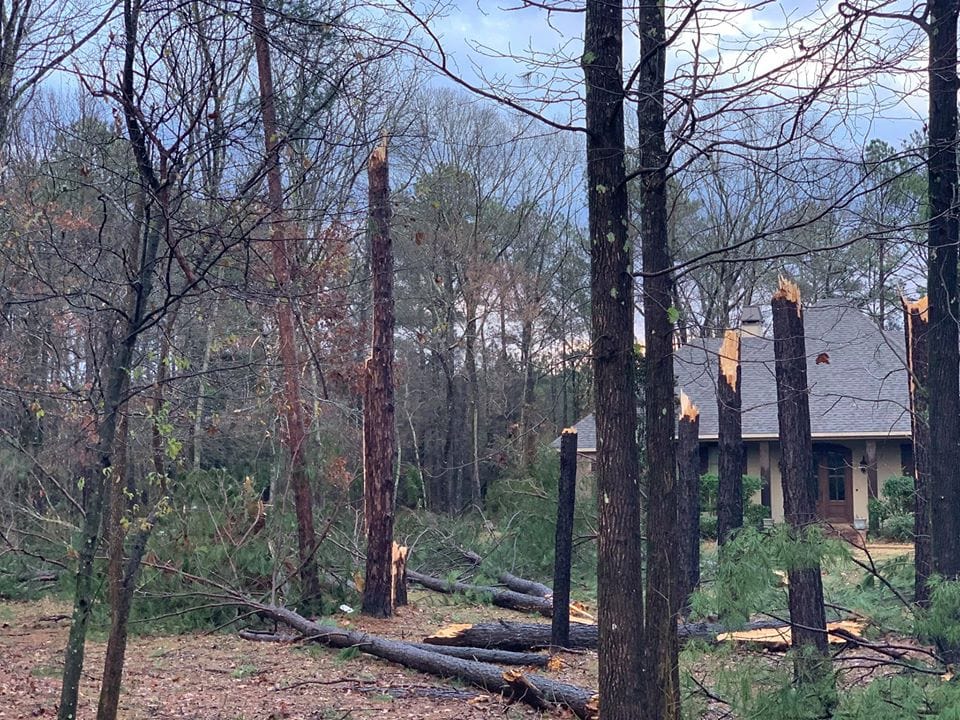 HAUGHTON, La. (LBM) – Gevan Spinney woke up early Saturday, Jan. 11, to a howling wind from a  powerful storm system making its way through Haughton. A short time later he walked outside to find 60 downed trees across his lawn but miraculously with no damage to his house.

Spinney, pastor of First Baptist Church in Haughton, credits God for sparing his life and home.

“Once the sun came up I found my wife, Andrea, in the front yard weeping,” Spinney told the Baptist Message. “It became real obvious the Lord had His hand on our house and protected us. We had this overwhelming feeling come over us. Our family was so very grateful for the Lord’s protection.”

While Spinney’s home escaped destruction, others in his area were not as fortunate.

His house was located along the path of a storm that produced an EF2 tornado, whose winds reached 135 mph and caused widespread damage and three fatalities in the state. The tornado touched down before 1:30 a.m. south of Barksdale Air Force Base in Bossier Parish and ended around 2:05 a.m. five miles north of Arcadia.

According to the Bossier Parish Sheriff’s Office, Jerry W. Franks, 79, and Mary Sue Franks, 65, of Haughton died when the tornado destroyed their mobile home shortly before 2 a.m. Saturday. Raymond Holden, 75, of Oil City also died shortly after 1 a.m. the same day when a large tree fell onto his home, the Caddo Parish Sheriff’s Department reported.

The storm prompted the closure of part of Interstate 20 in Webster Parish for some of the morning Saturday.

The Bossier Parish Schools posted on its Facebook page that a representative from the Louisiana Governor’s Office of Homeland Security and Emergency Preparedness and parish officials toured the damage with Principal Kyle Machen and Superintendent Mitch Downey. Faculty and staff spent most of the day Monday preparing for the return of students to the school on Tuesday.

“This one hit especially close to home for me since my son Jack is an eighth grader at Benton Middle School,” U.S. Rep. Mike Johnson told the Baptist Message. “I had the opportunity to go to the school and survey the damage over the weekend, and as bad as it was, it could have been much worse.

“We are grateful to the local leadership in Benton and first responders for their quick response and steady hands,” continued Johnson, a member of First Baptist Church in Bossier City. “I also want to thank everyone who donated their time to help repair the school. We are a very resilient community. This is not our first storm, and it won’t be our last. We will pick up the pieces, rebuild, and continue on.”

The National Weather Service reported hundreds of trees fell in Doyline and Sibley, and a metal barn, roof on a home and shed were heavily damaged on Wallraven Road north of Dubberly. In Athens, six chicken houses and the roof a home were damaged.

KSLA-TV in Shreveport reported that a person was injured when a home one mile southwest of Oil City was damaged. First responders also were on the scene at North Kerley Avenue in Oil City, where a tree fell on at least one house. High winds also blew a mobile home off its pad and into a pond in Bossier Parish.

First Haughton responded by sending more than 150 of its members Saturday and Sunday out to clear debris and cook meals for residents impacted by the storm in their community. They also hosted inside the church family life center a community watch party during Monday night’s national championship game.

Spinney said he was overcome with a sense of gratitude when he saw his members join others in the community to show Christ’s love.

“It was pretty cool to see the body of Christ out there working and sharing,” Spinney said. “This was a tangible reminder the church is alive and well and willing to serve and love and be the hands and feet of Jesus.

“People were very grateful everywhere I went over the weekend,” he continued. “This is an opportunity where all the walls come down and you have opportunities to share the love of the Lord. That’s why disaster relief is so important for our state and convention. It gives people an opportunity to show love on those who are hurting.”

By Bill Britt HAUGHTON, La.  – Of all people, the Apostle Paul could have legitimately complained about the circumstances that he endured throughout his life. When we look back to the beginning of Paul’s journey as a believer, we see that he received a message from the Lord that illuminated the path he was … END_OF_DOCUMENT_TOKEN_TO_BE_REPLACED