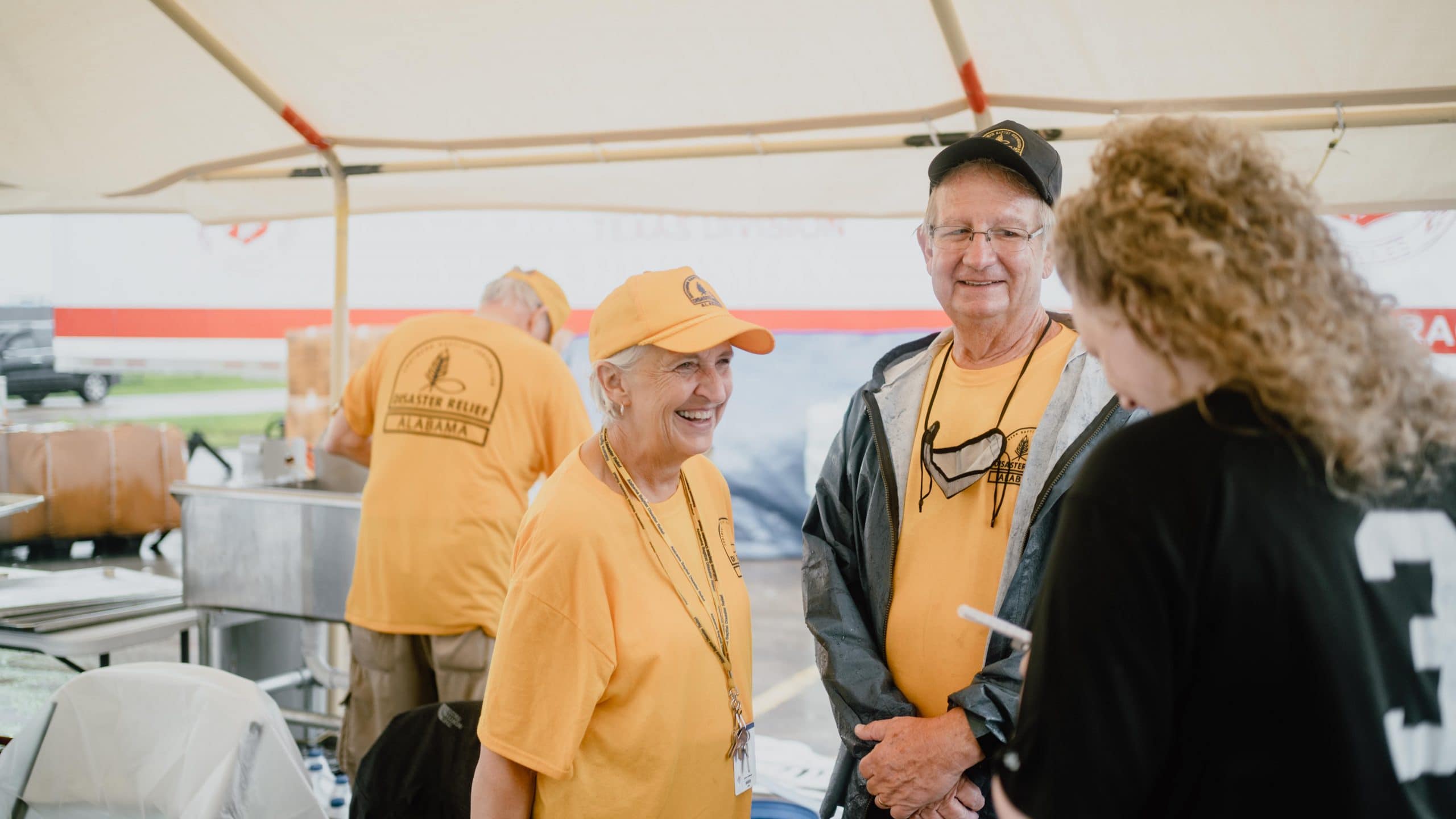 Ferrell and Connie Hataway serve with Alabama Baptist Disaster Relief’s feeding unit in Houma, Louisiana. The couple are members of The Church at Brook Hills in Birmingham. Photo by Sam Evans

HOUMA, La. — Ferrell Hataway approached the car that pulled up by the tents where industrial cooking equipment and supplies were housed.

A man was behind the wheel, and an 8-year-old girl was in the passenger seat. As Hataway was talking to him, he learned that this family’s trailer had been destroyed by Hurricane Ida, and the family of five had lost most of their earthly possessions.

Hataway invited the family to come under the tent and shared some snacks and drinks with them, and as he did, he knelt down in front of the three daughters, two of whom were twins.

“I said, ‘Girls, I want you to know something. These are hard times. Y’all have lost a lot, and we know that. But I just want to mention to you a few things you haven’t lost. You haven’t lost God, because He’ll never forsake you. And you’re so lucky because you’ve got your momma and daddy, and they love you. And you’ve got people like us … who are here to help you and to represent Christ in your life and help you get through these difficult times.”

Hataway and his wife, Connie — members of The Church at Brook Hills in Birmingham — got to pray with the family. That’s what Alabama Baptist Disaster Relief work is all about.

“In this work, you’re meeting the physical needs so you have the opportunity to fill the spiritual needs,” he said. “We’re bringing Christ to them through a barbecue sandwich.”

In the grocery store parking lot where his team of 14 volunteers is set up in Houma, Louisiana, they’re making 5,000 meals a day as a feeding unit to meet those physical needs. Then they package those meals up for the Salvation Army to pick up and distribute.

By Lane Corley MADISONVILLE, La. - Three years ago, our family was going through one of those down seasons in the ups and downs of life. My mental focus and physical health was declining. I was discouraged and struggling mentally and emotionally. I knew I needed to change a few habits. As part of a recovery … END_OF_DOCUMENT_TOKEN_TO_BE_REPLACED