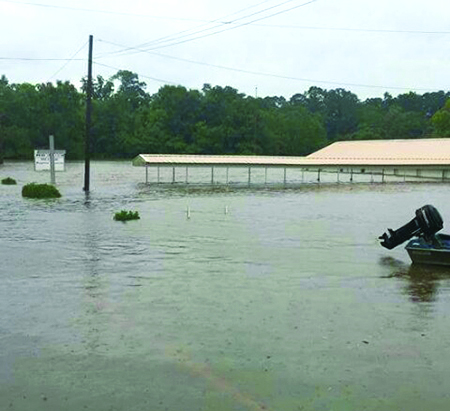 ALBANY — Nearly 300 people staying at a shelter at Bethlehem Baptist Church in Albany are temporarily stranded.

Lonnie Wascom, director of missions for Northshore Baptist Association, told the Baptist Message the church is serving as an American Red Cross shelter. He said it has plenty of supplies for evacuees but accessibility into and out of the church by roadway is next to impossible.

“The people there are tired but considering the situation, the volunteers at the church are handling things the best they can,” Wascom said.

The historic flooding has shut down many roadways in Livingston Parish, forcing many residents out of their homes and countless rescues of those trapped in vehicles and houses. The Louisiana State Police and Louisiana National Guard are attempting to rescue motorists who have been stranded on Interstate 12 for more than 24 hours.

Helicopters are dropping food and water to those trapped on the roadway.

Wascom said to call the situation bad is an understatement.

“I just completed a recon of part of the western portion of our association and it’s bad,” Wascom said. “And it is worse the further west you go. And there are also those on the east side of the I-55 corridor who have been hammered as well. Please remember to pray for the Northshore Baptist Association member churches whose facilities have been hit by the flooding.”

Wascom knows of at least nine churches affected by the flooding.

Floodwaters have Crossgate Baptist Church, Robert surrounded and 2 to 3 feet have gotten inside the church.

Wascom said disaster relief mud-out teams have not been mobilized yet in his immediate area because of the lack of accessibility.

“But here’s the thing, co-laborers – we can minister right now and so many of you are and for that I give thanks to our Father.”

By Mark Devine As the dust settles from the annual meetings of two major evangelical denominations, the contrast between them could hardly be more stark. Courage won the day among those gathered for the PCA. Fears of elitists won out among the messengers to the SBC. ... READ MORE … END_OF_DOCUMENT_TOKEN_TO_BE_REPLACED