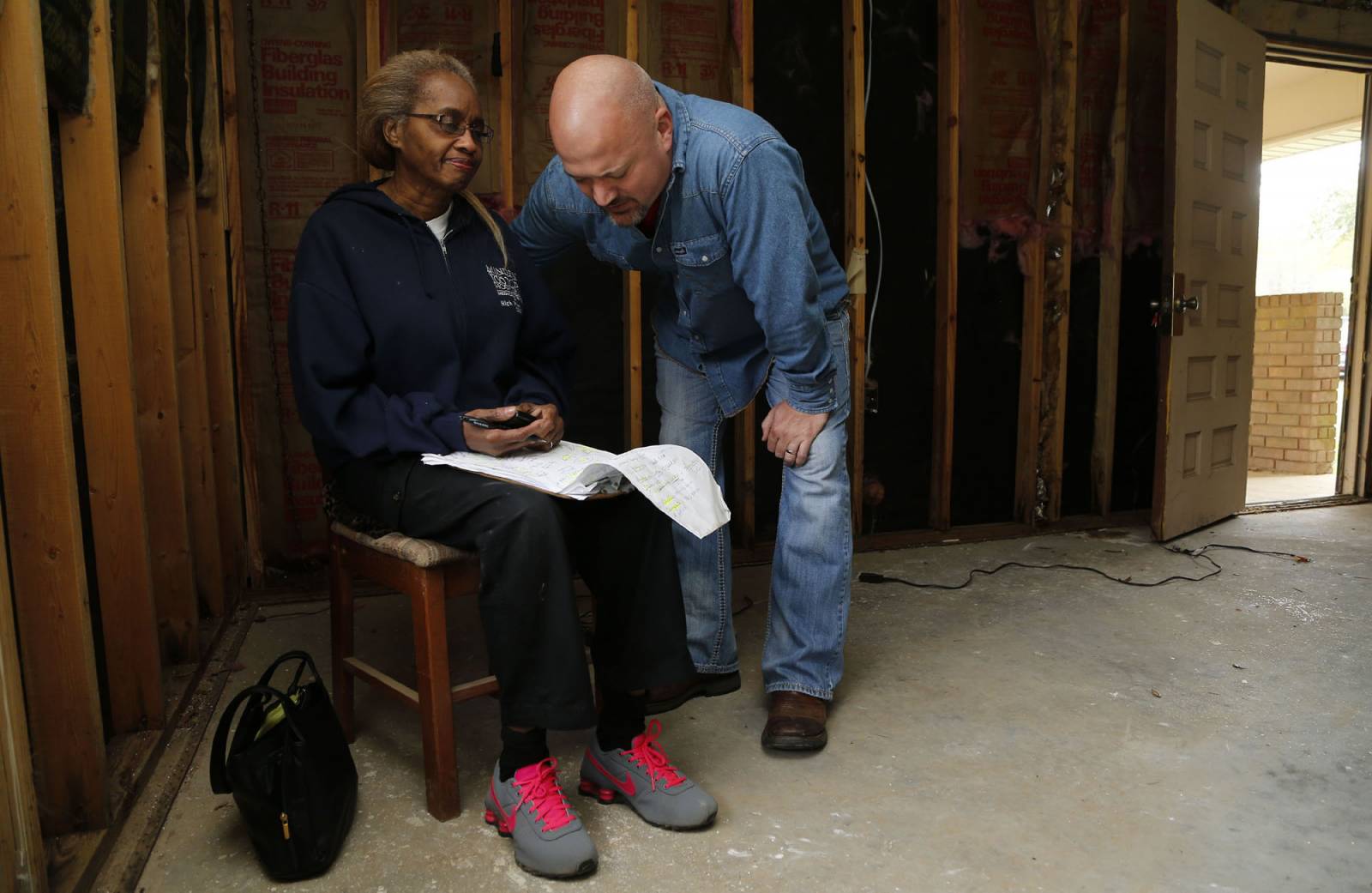 Dezzie Jackson, a 45-year resident at her home on Woods Street in Minden, asks for prayer with Gevan Spinney, pastor of First Baptist Church Haughton, after she received a phone call telling her that her vehicle was a total loss due to flood damage. NAMB photo by Stewart F. House

Getting a firm handle on the size of the problem Louisiana Baptists’ recovery efforts are facing is almost as frustrating as actually dealing with the aftermath of the floodwaters, according to David Abernathy who serves Louisiana Baptists as disaster relief incident commander.

It can be very frustrating at times, he said.

But, he said the pieces are starting to fall into place with regard to operations prompted by the historic rainfalls that hit the state the last two weeks.

Abernathy said “20 to 24 inches of rain fell” in some areas but some spots “received up to 30 inches in less than 48 hours” and up to 30 parishes, so far, have been impacted by flooding.

To date, “13,000 homes have been damaged in some way by the flooding,” Abernathy added. “But those numbers are going to grow because there is still flooding and a lot of backwater in many areas of the state.”

According to the National Weather Service, the Red River and the Ouachita River have both crested but neither has really fallen.

“There is no place for the water to go. I checked today and the Ouachita River has not fallen at all and the Red River is the same,” said Abernathy. “We received another ½- to 1 inch of rain this morning but areas to the north and east of us received a lot more rainfall. Unfortunately, we will get the run off from those storms by this weekend.”

Already, he projects that “ongoing operations will take two, maybe even three months before all is said and done.”

All of the parishes hit by the flooding “have significant damage,” Abernathy emphasized. “Some are rural while others are more heavily populated, and the number of homes impacted in each could run as few as 250 or as many as a 1,000.

“We won’t really know until the floodwaters recede and we can get in there to assess the damage,” he said. “So, the numbers I have are moving and will continue fluctuate for some time to come.”

Abernathy expressed frustration at the fact there is very little coverage in the national press about the ongoing disaster in Louisiana, despite the huge numbers of people affected by the damage.

“Besides the people here in the state and Southern Baptist Disaster Relief, very few people realize what is taking place. As a nation, the news media has already moved on,” said Abernathy. “Therefore, our situation here is not on the minds of people across the nation.

“There are even people here in the state that have already moved on,” he continued. “If they haven’t been affected by the flooding or know someone who has, they have gotten busy with doing other things.”

Abernathy estimates between 80 to 85 percent of the state’s trained disaster relief volunteers were hurt by flooding.

“We have some outstanding disaster relief volunteers in this state, but when you get only one call back out of 15 to 18, you begin to realize just how big this disaster really is,” said Abernathy. “What makes matters worse: Texas, Arkansas and Mississippi, who we usually turn to for help, have all experienced flooding as well.

“So, we have had to step further out in our region than normal to seek help,” Abernathy said. “And we’ve gotten it from states like Oklahoma, Missouri, Alabama, North Carolina, Illinois, Tennessee, Virginia, South Carolina and Texas. We had 12 state conventions respond to our initial call for help but many of those units are rotating out for Easter.” 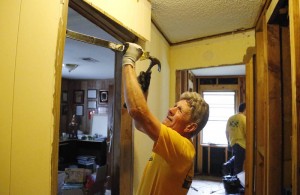 Because of the scope of the disaster, a decision was made this week by the North American Mission Board to put out a national call for help. NAMB’s national command center unit arrived Thursday and will be up and running by Monday. A new command team has arrived to man the center.

According to John Cowling, head of operations at the state incident command center, “We have some preliminary numbers of our efforts so far. Mind you, this is just what is being reported by the DR teams and they are a little sketchy right now because of a different reporting methods and teams starting to rotate out.”

Even though not everything has been reported, Cowling said more 13,000 meals had been served since Monday and this does not include what individual churches have done.

“To be honest, we would have given out more Bibles and tracts but our chaplains and crews just ran out. With the second 18-wheeler that got here this morning, we got two more pallets of Bibles and additional tracts,” Cowling said.

The shower and laundry units reported more 1,200 people have taken showers and 700 loads of laundry washed.

The two container loads of supplies included 6 pallets of bottled water [12,000 bottles], 6 pallets of blankets, 4 pallets containing packs of trash bags, masks and suits for mud-out and spraying, 6 pallets of paper products and 4 pallets of Shockwave, which is ‘the best stuff available for mold remediation.’

“The driver of the 18-wheeler dropped supplies here Monday, drove to Flint, Mich., and delivered a second resupply here this morning,” said Cowling. “He said he will be back here very soon.”

By Lane Corley Olive trees produce one of the most desired and sought after fruits around the world. The trees can live for thousands of years. The olive and the olive tree is spoke of in the Bible on numerous occasions. Including a few references to family life, like in Psalms 128:3 – “Your children will be … END_OF_DOCUMENT_TOKEN_TO_BE_REPLACED