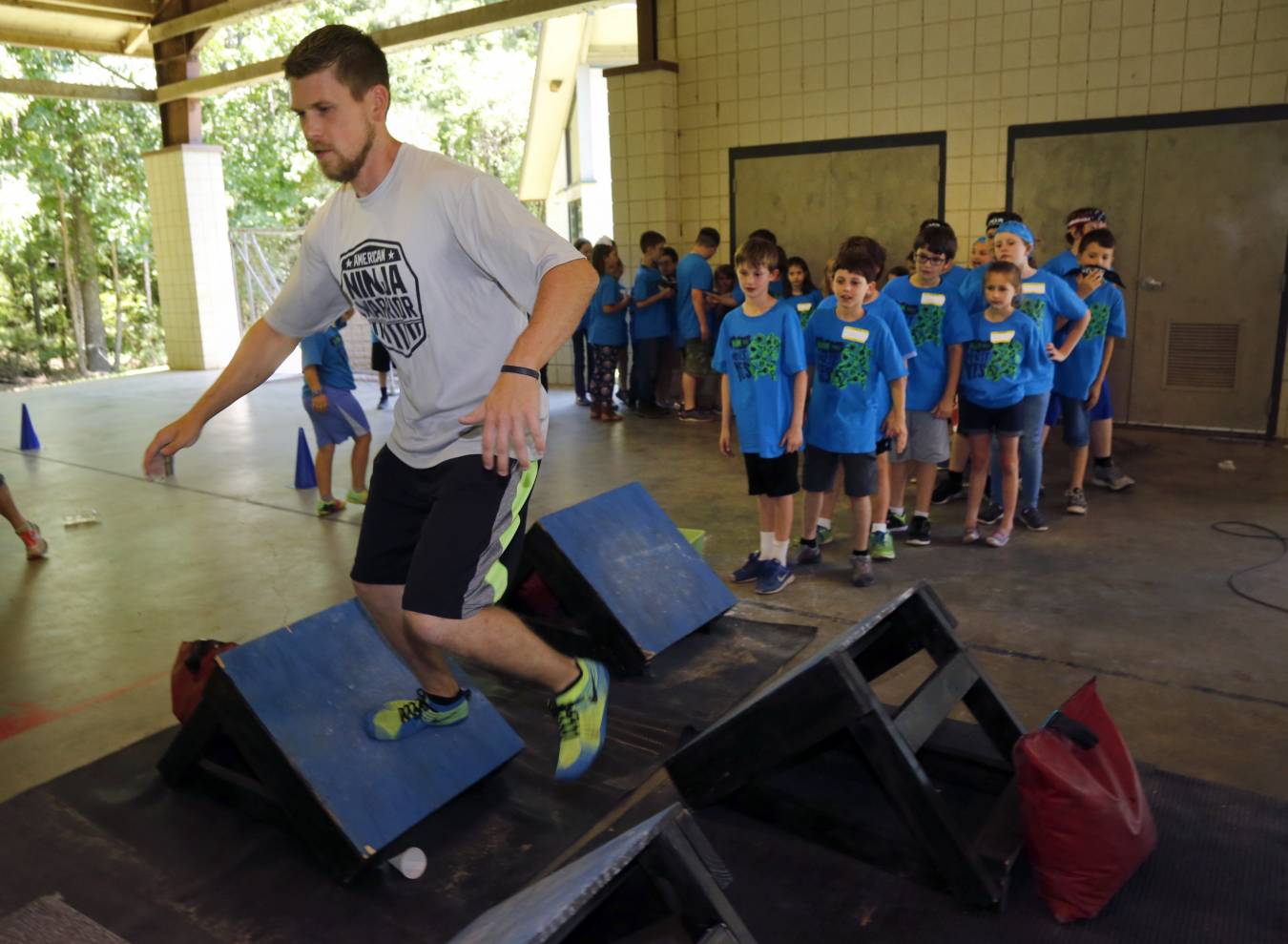 He stopped and posed a question to the crowd, the largest to ever attend an event at the center, “Have you overcome the ultimate obstacle in life?

“Today is all about overcoming obstacles,” Greer told more than 600 children and adults at Missions Jamboree, also known as M-JAM, Saturday, May 6.

“You can overcome any obstacle with Jesus. He overcame the biggest obstacle – death,” he continued. “Do you believe Jesus to forgive you? Have you asked Him to do that?”

In the end, a dozen children indicated their desire to follow Christ.

Since May 2016, Greer has traveled the country telling his story about how God has allowed him to use his skills displayed on the TV show to share the Gospel. He told the kids, first through sixth graders, Saturday that when he did not complete the obstacle course on the show in 2014, he felt crushed and defeated.

“I was so frustrated and God whispered to me what do you do when you fall down?” he said. “You get back up.”

In 2015, Greer was allowed a second chance at completing the course. While he did not finish again, Greer told the M-JAM crowd he learned God had other purposes for his life beyond American Ninja Warrior.

“Sometimes all we have is our best,” he said. “What’s your gift? What can you use to tell people about Jesus?”

The day-long M-JAM featured Louisiana and international missionaries and was held at two locations, allowing for youngsters and their leaders to attend M-JAM closest to where they live.

“More than anything else, we wanted this entire event to glorify God,” said Jess Archer, children/youth mission education strategist for Louisiana Baptists. “We felt it was vitally important to teach children about how they can have a personal relationship with God through Jesus Christ and also teach them about missions.”

“This was so awesome and cool when he climbed all the way up to the top of wall that was so high,” said Faith Webb, a first grader from Bentley Baptist Church. “He believed in God and did not give up. I learned that when we don’t give up, we can accomplish so many things.”

Eli Whitstine, a fourth grader from Bethel Baptist Church in Colfax, enjoyed fellowship with friends from his church and others he met for the first time.

“It was cool for all of us to be able to watch someone like the ninja warrior,” Whitstine said. “He showed us we have to have Jesus to get through the obstacles we may face.”

By Don F. Mabry ALEXANDRIA, La. (LBM)-- The number of churches in our country constantly is changing and it is very difficult to acquire information from the various denominations, but estimates indicate that there are 330,000 Christian churches and congregations in the United States today. But the question … END_OF_DOCUMENT_TOKEN_TO_BE_REPLACED