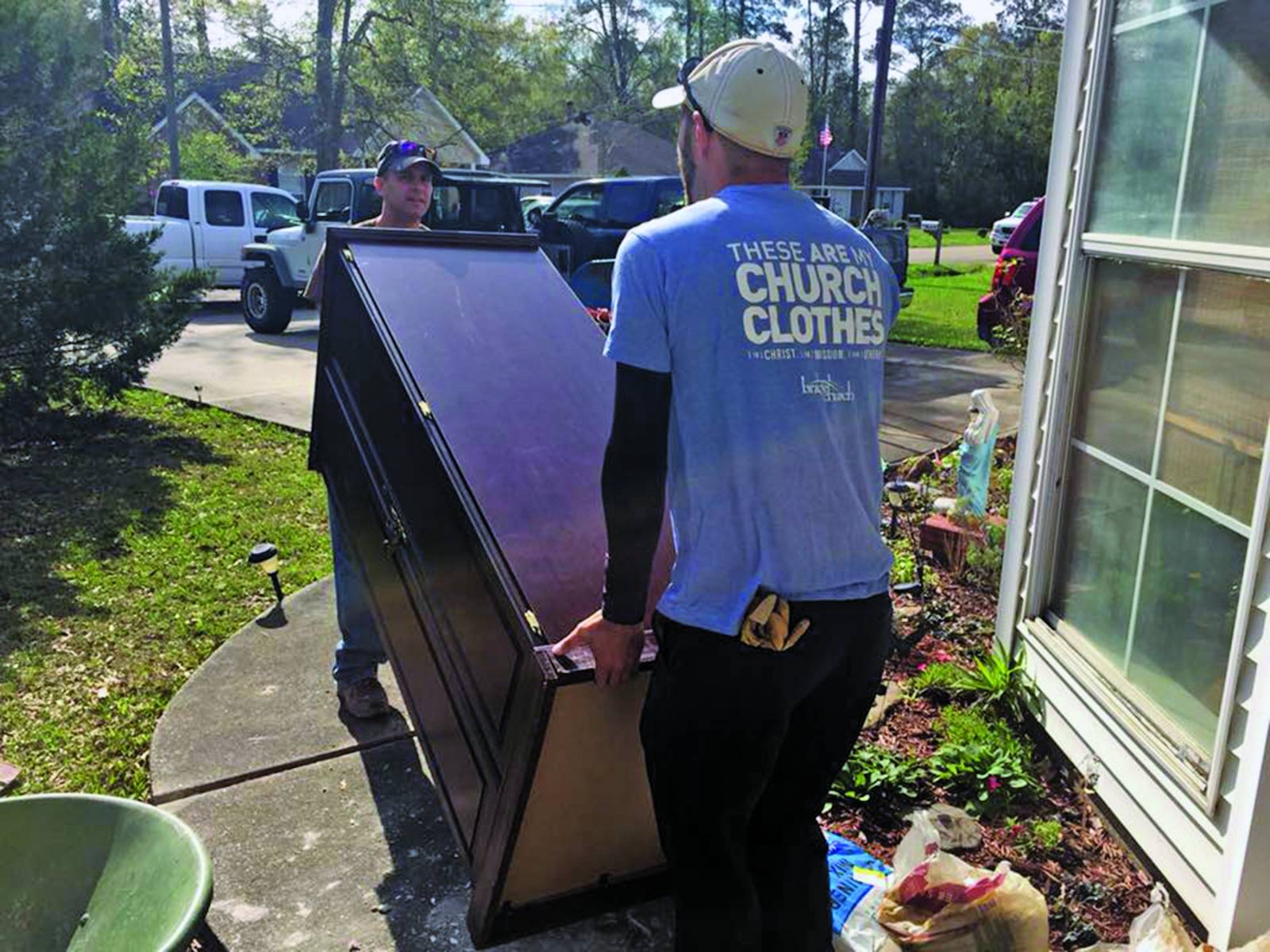 Members of The Bridge Church in Madisonville help an elderly couple in Covington to remove furniture ruined by the flooding.

Now, the work begins in earnest.

While most rivers have crested or are predicted to crest this week, the floodwaters are starting to fall slowly. Behind those flooding waters, disaster relief crews from numerous Louisiana Southern Baptist churches and state DR teams have gone into overdrive to meet the requests and needs of thousands affected by the spring floods of 2016.

A massive cleanup effort is taking place in Louisiana.

Churches throughout Louisiana have mobilized to deal with the massive disaster and they are being joined in the field by DR teams from 12 states with three more states expected to join the recovery effort in a week or so.

“Mudout is the great need right now,” said Northshore Baptist Association’s Director of Missons Lonnie Wascom said. “There are simply too many jobs. The number of mudout/debris removal requests coming into the LBC/SBC Disaster Relief incident command center in Hammond is overwhelming.

“There are far more requests than there are trained volunteers who are available to meet those needs,” said Wascom.

Louisiana Disaster Relief leaders are reacting quickly to meet the needs for more trained volunteers by holding training at Rolling Hills Ministry in Ruston and at Woodland Park Baptist Church in Hammond Saturday. 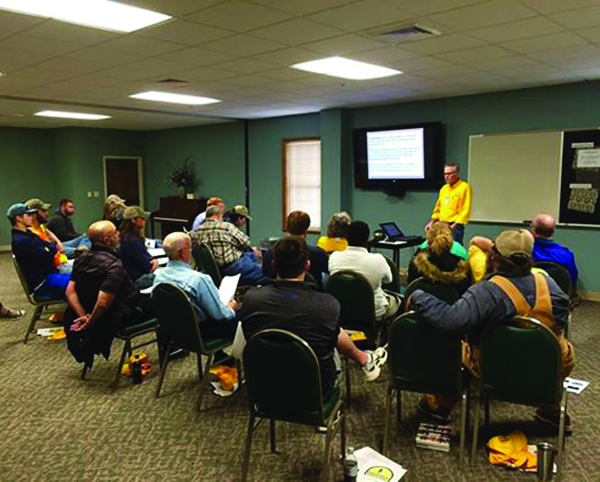 “We trained 134 volunteers in mud out, feeding, chainsaw, childcare, and ham radio just to name a few,” said LBC’s Northern Region’s Regional Coordinator David Abernathy. “I want to thank everyone for showing up and stepping up in our time of need.”

Another training session in Southeast Louisiana at Woodland Park in Hammond also drew a number of volunteers seeking training.

“Levees broken, towns evacuated, livestock lost, 45 minute air boat rides to deliver supplies, water rescues, and highways submerged are the stories we are hearing from Disaster Relief responders across the state,” said Abernathy. “Where the water level decreases, it increases in another area. Southern Baptist Disaster Relief units are working across the state finding new flooded areas to assess and prepare for mud-out.

“There will be two more disaster relief training sessions March 22 at 6:30 p.m., at Trinity Baptist Church in Natchitoches and Houston River Baptist Church in Sulphur,” said Abernathy. “So, please spread the word.” 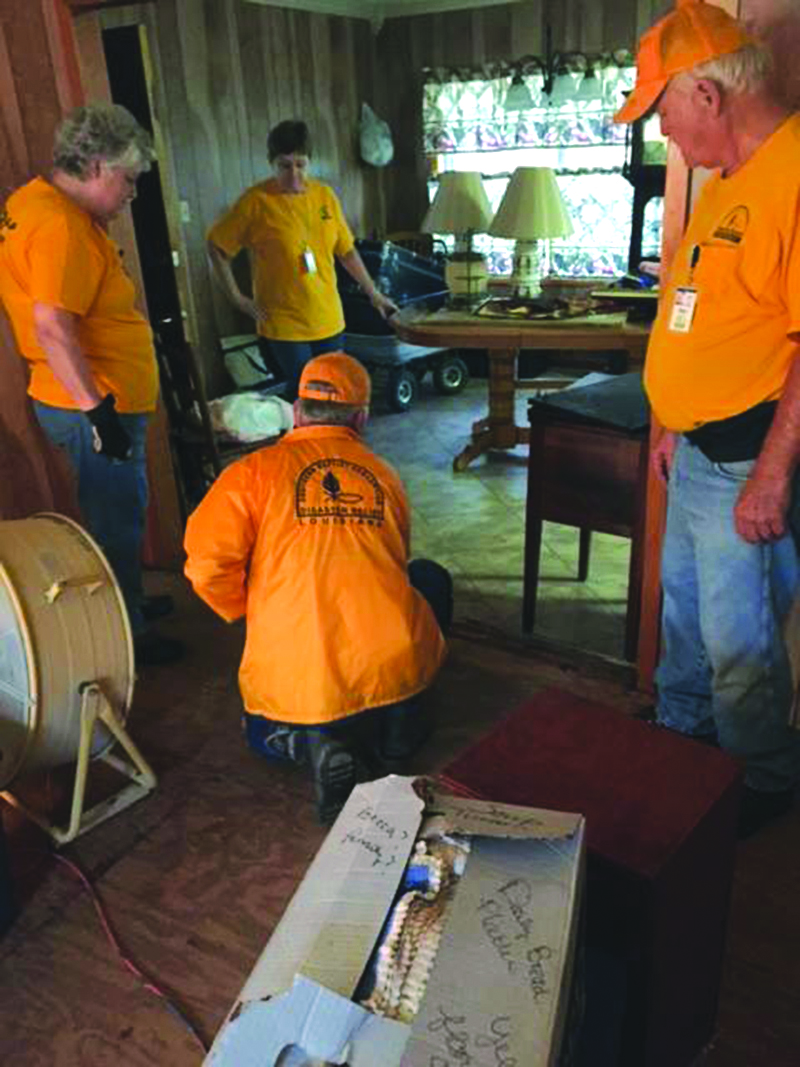 A disaster relief unit from Kentucky assists a homeowner by pulling out carpet damaged by the floodwaters.

“DR teams from Kentucky, Missouri and North Carolina are here in the northwest part of the state assisting with recovery efforts,” wrote Northwest Louisiana Baptist Association Director of Missions Lane Moore. “Thirty-two of 64 parishes have some flood damage.

“The area of devastation is just unbelievable,” Moore continued. “There is more than enough work to go around. Caddo, Bossier and Webster both have been declared federal disasters areas which will enable many to receive FEMA help as recovery continues.”

In many areas, though, churches have not waited but have pitched immediately to answer the needs of victims.

“Signs of our churches helping in this difficult time are everywhere,” said Wascom. “To God be the glory.”

“We’ve had flooding in this area before but certainly never to this extent,” wrote Paul Watts, pastor of First Baptist Church Franklinton and a long-time veteran of disaster relief work on Facebook. “I know we are all stretched thin right now, but I want to encourage the churches of BASELA to continue their disaster relief efforts in the affected areas.

“We have had 223 requests for help and have already assessed over 100 job sites. We just need people,” said Watts. “While we’re waiting for our brothers and sisters from other churches and other states to get here, we have mobilized and we’re getting to work. There is more than enough to do in this area.” 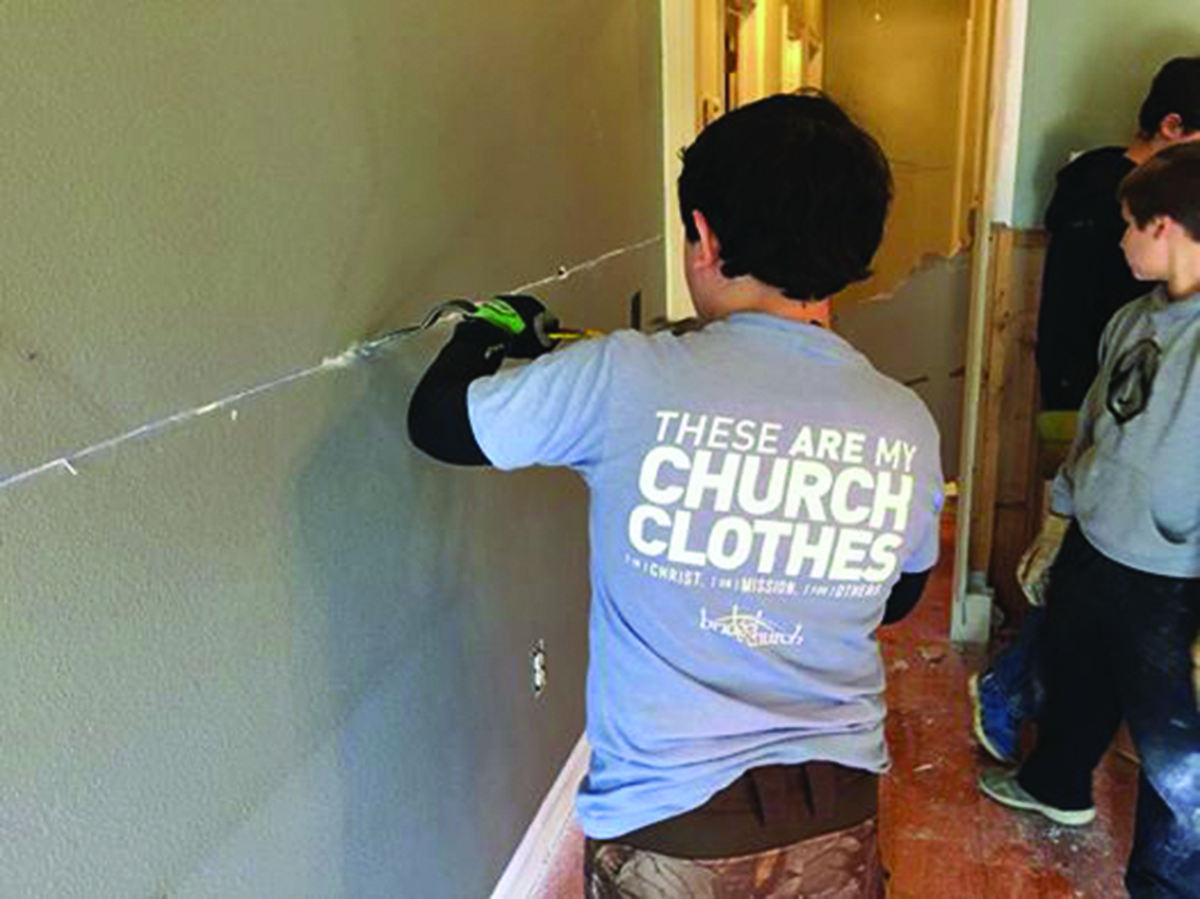 A member of Bridge Church in Madisonville removes dry wall from a Covington home.

Every time there are five Sunday’s in a month, The Bridge Church in Madisonville takes a Sunday to serve its community. This Sunday the church is spreading out to assist neighbors in Covington with recovery efforts from the flooding.

Pastor Lane Corley asked people to message him of people in need of removing furniture or gutting sheetrock or carpet ruined by the flooding.

“We had a great crew helping an elderly couple in Covington with mud out,” Corley wrote March 20 on Facebook.

From the north to the south and everywhere in between, churches are making a difference by helping with mud-out, clean up, and disaster relief. They have also collected thousands of dollars in supplies to assist homeowners in their recovery efforts.

First Baptist Church Jennings distributed more than 11,000 pounds of food in less than an hour for people in a community in the Carey Association.

First Baptist Church Jennings distributed more than 11,000 pounds of food in less than an hour for people in a community in the Carey Association.

“It’s going to be worse than anything we’ve ever seen in the past, it’s going to be a record flood,” said Jonathan Brazzell with the National Weather Service.

While there were a lot of areas affected by the high water, the magnitude of the disaster forecasted thankfully did not take place.

While 50 percent of the membership of Crossroads Baptist was evacuated ahead of the flooding west of Hwy 109, they were able to continue to be able to be a staging area for evacuees and first reponders.

A shower and feeding unit is being sent to the area, First Baptist Church Starks, which has a shower unit from Texas, escaped flooding.

Allen Parish Sheriff Doug Hebert III said most residents have been able to return home and have begun cleanup as floodwaters continue to recede. “The water is moving out pretty quick now and is going down in most areas,” Hebert said.

THERE’S SO MUCH TO DO

“The work is only just beginning, and there is so much to do,” said John Hebert, Louisiana Baptist Convention’s Ministry and Mission director. “I really don’t believe people have fully grasped the magnitude of damage this flooding has caused or the number of homes affected.

“We have only just scratched the surface,” Hebert continued. “We are going to be in recovery for many months to come.”

By Lane Corley Olive trees produce one of the most desired and sought after fruits around the world. The trees can live for thousands of years. The olive and the olive tree is spoke of in the Bible on numerous occasions. Including a few references to family life, like in Psalms 128:3 – “Your children will be … END_OF_DOCUMENT_TOKEN_TO_BE_REPLACED