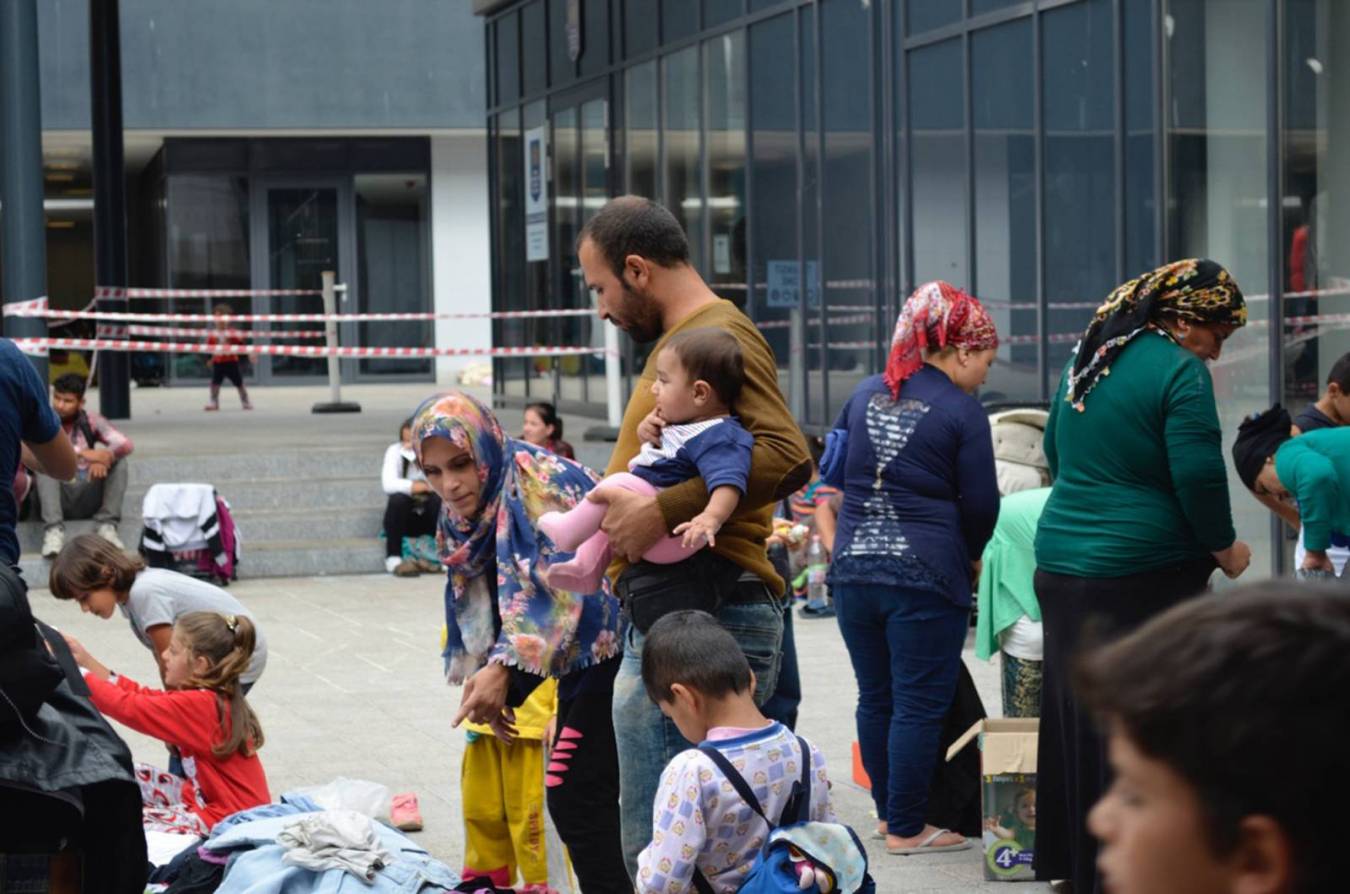 Refugees at Keleti Train Station in Budapest, Hungary, search through bags of donated clothing while awaiting permission to board trains to Germany. IMB photo by Jennifer Freedman

NASHVILLE (BP) – Turkey’s shores received the body of 3-year-old Aylan Kurdi minutes after a small boat capsized while carrying him into the Mediterranean in early September with his father, mother and 4-year-old brother and other refugees from the Syrian Civil War.

They left with hope of finding safety and security. Instead, Aylan and his brother became two of more than 11,000 children — at least 230 of whom were also 3 years old — killed as a result of the war, as recounted in a Washington Post report on Sept. 5.

Aylan’s mother also died. But Aylan will never be forgotten, because a nearby photographer made him an international symbol of the Syrian refugees’ plight.

Also not to be forgotten: the reports of systemic rape and sexual slavery of women across Syria and Iraq. The so-called Islamic State continues to wreak havoc in the region, its campaign of terror emanating from Raqqa, Syria, its de facto capital.

As Christians, we know that we must respond.

Jesus tells us that if we are to fulfill the second greatest commandment — to love our neighbors as ourselves — we must show them mercy (Luke 10:32). Jesus also calls those who exhibit saving faith to feed the hungry, give drink to the thirsty, welcome the strangers, clothe the naked, visit the sick, come to the prisoners (Matthew 25:35–26). If we are in Christ, all of our own stories are marked by the fact that Jesus showed us mercy, too, when we were in great need, when we were hopeless, when we had no future.

And so we want to help. And yet, the situation in Syria is paralyzingly complex. We don’t know what to do. We’re afraid to act because we are unsure of the long-term consequences. We don’t know which organizations to trust.

For today, here are some ways you can begin to respond:

Jesus tells us that if we knock, the door will be opened, that if we have faith the size of a mustard seed, mountains can be moved. The famed British preacher Charles Haddon Spurgeon famously said that prayer is “the slender nerve that moves the muscle of omnipotence.” Let us not believe that our prayers are too small a response to this crisis.

Here are some things to pray for:

— Pray for a movement of the Gospel among the Syrian refugee community.

— Pray for the hundreds of Aylans who will leave the shores of the Middle East in the coming days, weeks and months. Pray for their safety and protection.

— Pray for your brothers and sisters in Christ who are working to care for the refugee communities around them.

— Pray that God would open your eyes to ways that you can help ease the pain of those impacted by this conflict.

For additional prayer resources, connect with thesyriancircle.com/pray, a website supported by Cru and other ministries.

We know that it’s hard to know which organizations you can rely on and trust. Here is what Southern Baptist organizations are doing:

— Baptist Global Response: In Syria, BGR is distributing food and hygiene items, blankets and medicine to 2,500-4,000 refugee families as well as diapers and formula for families with young children.

— Global Hunger Relief: 100 percent of any donation goes directly to meet hunger needs because of the partnership with the International Mission Board, North American Mission Board and Baptist Global Response. Text “refugee” to 80888 to donate $10 for Syrian refugees.

The following FAQ (question-and-answer article) is reprinted from the ERLC newsletter The Weekly on Sept. 11:

Explainer: What You Should Know About the Syria Refugee Crisis

Q: What is the Syria refugee crisis?

A: For the past four years, Syria has been in a civil war that has forced 11 million people — half the country’s pre-crisis population — to flee their homes. Nearly 7 million Syrians have been internally displaced within the country and 4 million have fled Syria for other countries. The result is one of the largest forced migrations since World War II.

Q: If this has been going on for years, why is this now in the news?

A: The images of the lifeless body of a 3-year-old Syrian refugee captured the attention of the global media in early September. The child had drowned after the 15-foot boat ferrying him and his family from a Turkish beach resort to Greece capsized. The images reignited a debate about whether the European Union and other Western countries were doing enough to aid refugees from the war-torn country.

Q: How did this all start?

A: In 2011, during the Middle Eastern protest movement known as the Arab Spring, protesters in Syria demanded the end of Ba’ath Party rule and the resignation of President Bashar al-Assad, whose family has held the presidency in the country since 1971. In April 2011, the Syrian Army was sent to quell the protest and soldiers opened fire on demonstrators. After months of military sieges, the protests evolved into an armed rebellion that has spread across the country.

Although the conflict was originally between factions for and against President Assad, the civil war has broadened into a battle between the country’s Sunni majority against the president’s Shia Alawite sect. The conflict has drawn in neighboring countries and world powers and led to the rise of jihadist groups, including the self-proclaimed Islamic State.

Q: What is the U.S. doing about the refugee crisis?

Since the start of the conflict, the U.S. has admitted 1,500 refugees from Syria. At a press briefing Sept. 10, White House Press Secretary John Earnest told reporters that the Obama administration is making plans to accept 10,000 Syrian refugees in the next budget year. (There is currently cap of 70,000 refugee visas a year that U.S. officials can issue.)

Q: Where exactly is Syria located in the Middle East?

A: Syria is located north of the Arabian Peninsula at the eastern end of the Mediterranean Sea. The country, which is about the size of North Dakota, is bordered by Turkey on the north, Iraq on the east, Jordan on the south, and Lebanon, Israel and the Mediterranean on the west. Its biggest cities are Aleppo (population 2,301,570) and Damascus (population 1,711,000).

Q: Isn’t Syria one of the lands mentioned in the Bible?

A: The modern state of Syria is part of the region known throughout history as Greater Syria. The city of Damascus is mentioned 67 times in the Bible. The road to Damascus was the place of the apostle Paul’s conversion (Acts 9) and Antioch was the city in which the disciples were first called Christians. (Acts 11:26).

By Stewart Holloway PINEVILLE, La. (LBM) - For over two months now, my oldest son, my mom, and I have spent most Friday mornings at my mom’s clearing overgrown brush. What was planted as a fruit orchard in an open pasture almost thirty years ago has grown into a wilderness of every kind of vine and tree … END_OF_DOCUMENT_TOKEN_TO_BE_REPLACED