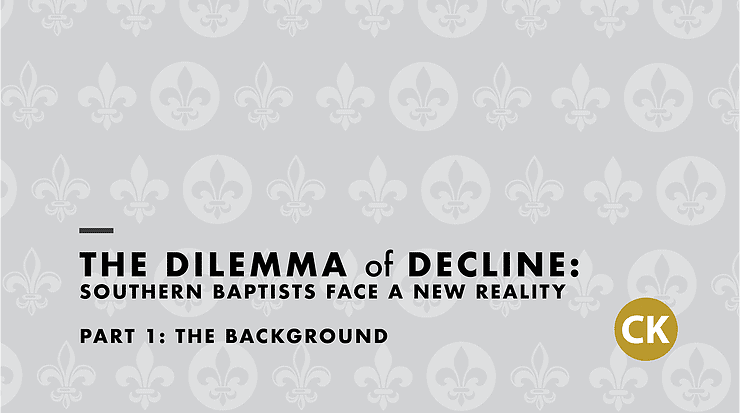 The graph above was prepared by Dr. Bill Day of the Leavell Center for Evangelism and Church Health at New Orleans Baptist Theological Seminary. It depicts the emergence of the baptism gap and the change in the health of evangelism in Southern Baptist churches. The graph begins in the nineteenth century and ends in 2018, covering more than one hundred years. The dark line shows the total number of churches. The red line shows the total number of baptisms by those churches. The separation between the number of churches and the number of baptisms began in 2000 and continues to grow larger. The denomination is navigating uncharted territory, facing a problem no other generation of Southern Baptists had to solve.

By 2010, frequent declines in membership, worship attendance, Bible Study/Sunday School attendance, and giving (per member to churches and per church to the Cooperative Program) added to the continual drop in baptisms. The most shocking development was the need to recall international missionaries from the field and ask as many of the missionaries as possible to retire voluntarily. Clearly the Southern Baptist Convention, long known for steady growth, passionate evangelism, and world missions, had become a Convention of churches in decline. Steady decline in nearly every statistical category became the emerging status quo. How to change this new reality is the most critical question facing Southern Baptists today. Part 2 will explore factors in the development of SBC decline.

Pastor’s Take Away: In all things, time tends to push toward decline and decay, meaning the coming of decline is normal. Is your church facing the challenge of decline? What are the indicators? When did it begin?

By Chuck Kelley Rhonda and I met on our first Sunday at Baylor University. We began dating during that freshman year, became an exclusive couple our sophomore year, publicly committed to a serious relationship in our junior year, became engaged in our senior year, and were married in June after graduation. We … END_OF_DOCUMENT_TOKEN_TO_BE_REPLACED