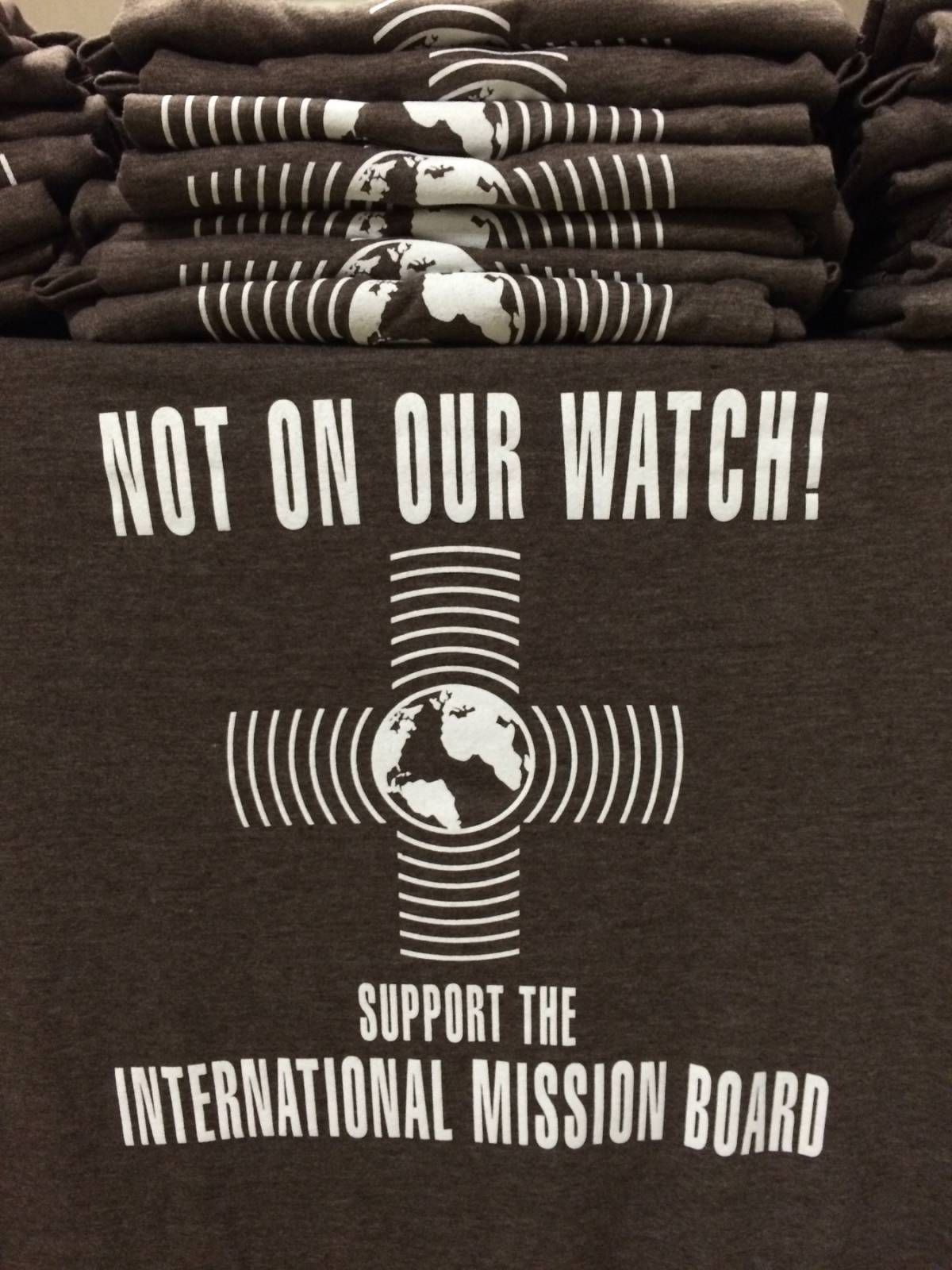 "Not On Our Watch" has become a battle cry -- and T-shirt -- for New Orleans Seminary students intent on supporting International Mission Board missionaries. Photo by Marc Ira Hooks

NEW ORLEANS (BP) – “When I first heard the news I felt bad, but my heart did not break,” Keith Taylor, a Ph.D. student in preaching, said of the 600-800 International Mission Board missionaries preparing to leave their place of service due to budget shortfalls.

“I was not broken for these folks who had given their lives for the work of spreading the Gospel around the world. And now their part of that work was coming to an end.”

Taylor’s attitude changed, however, after a chapel message by NOBTS professor Blake Newsom several weeks ago.

“It was not even a missions’ message,” Taylor said. “It was about stewardship.” Taylor and others challenged by Newsom’s message created a T-shirt emblazoned with “Not On Our Watch -– Support The International Mission Board” to be sold on campus. After only four days of sales, more than $1,200 was raised for the IMB’s Lottie Moon Christmas Offering.

The T-shirts reflect a rhetorical answer to the question: “Are we okay with the fact that Jesus told us we are to pray for workers to be sent into the harvest field, and on our watch we are bringing workers in from the fields?”

IMB President Platt expressed his appreciation for the Not On Our Watch theme during his visit to campus for Global Missions Week.

There is a growing sense of ownership among the SBC family, Platt said. “This is not just an IMB thing, it is I something that we can all be a part of.”

Students and faculty are being encouraged to wear the Not On Our Watch shirts as they serve in their churches across the region.

“We have perhaps the best missions-sending organization that has been created in the history of the world and we have the means to support that through the Lottie Moon Christmas Offering and the Cooperative Program,” Taylor said of the yearly offering and the year-round CP gifts from churches to support Southern Baptist missions and ministry. “Our goal is to embrace those and give in a way that maybe we haven’t done before.”

One master’s degree student in counseling was sporting his new shirt as he looked through the various IMB displays in the student center during the missions’ emphasis. “I may not be able to write a check for $21 million, but I can buy a T-shirt,” he said. “I want to do my part in supporting the IMB and international missions.”

Many of the IMB personnel on campus stopped by the Not On Our Watch table to give encouragement. One IMB worker in the office of global engagement said, “This is the first, I hope, of many creative grassroots efforts to really stir the hearts of God’s people.

“They are not outsourcing the missions’ problem to someone else. They are taking an active part in trying to find solutions together.”

Taylor said he has received numerous requests from churches and other individuals about getting behind the effort and ordering shirts. While no formal mechanism for sales has been established, people interested in supporting the Not On Our Watch initiative can send an email to Taylor at cooperateformissions@gmail.com.