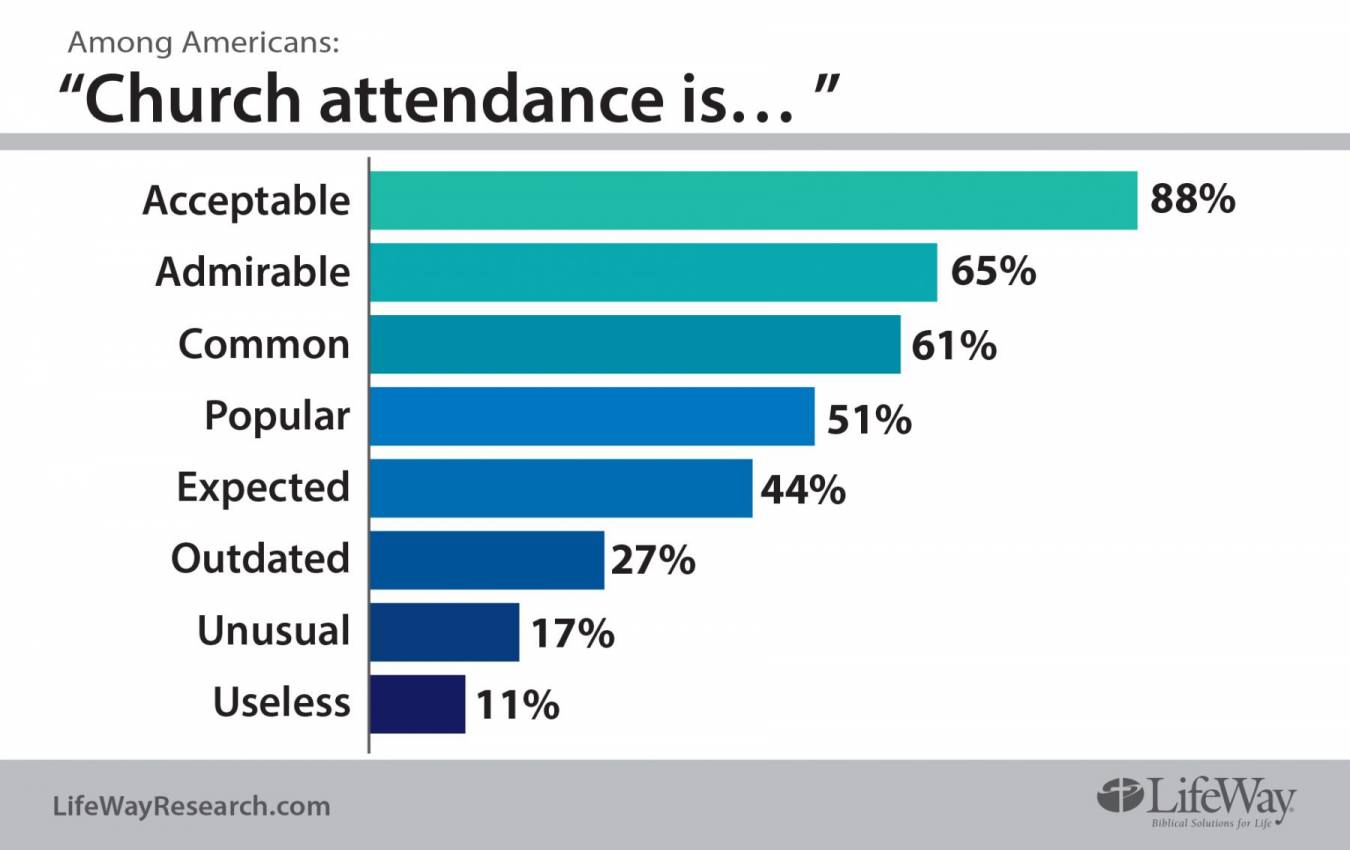 Even among nonreligious people, 80 percent believe church attendance is acceptable, and 43 percent label it admirable. Just 29 percent call it useless.

But despite their professed fondness for church, Americans are more likely to believe attendance is declining (55 percent) or the church is dying (42 percent) than growing (36 percent) or thriving (38 percent), according to the LifeWay survey of 1,000 Americans from Sept. 19-28 of last year.

“Americans have a much more optimistic view of the people and practice of attending church than they do of the health of the church,” said Scott McConnell vice president of the Nashville-based LifeWay Research. “Church attendance is much like regular exercise and driving the speed limit. People do not live out everything they admire.”

Confirming McConnell’s assertion that Americans’ churchgoing is at odds with their behavior, even on Easter, traditionally the best-attended Sunday of the year, large segments of the population say they don’t plan to attend, previous LifeWay research has found.

Their attitudes reflect the mixed trends of the past 50 years. While many mainline denominations have lost membership, some have grown. And while more people are Christian today than in 1970, Christians make up a smaller share of the burgeoning population, according to a study from Gordon-Conwell Theological Seminary.

Some say church is out of date

Faced with those trends, many churches have shifted toward contemporary worship styles and new outreach methods, although 27 percent of Americans still think church attendance is outdated, LifeWay research found. That belief is even more pronounced among the nonreligious (42 percent), Catholics (31 percent) and people 25 to 34 years old (34 percent) who are among the Millennial generation in which fewer claim religious affiliation or profess belief in God, according to the Pew Research Center.

Young adults, like most Americans, don’t see church attendance as an assumption in today’s culture. While 54 percent of those over 65 describe churchgoing as an expectation, that viewpoint is in the minority for every other age group – a sign that those who attend are making a personal choice rather than responding to societal pressure.

That’s a positive finding, McConnell said. “I don’t think evangelicals would want that to be the reason people go to church anyway.”

Larger shares of women also believe in the health and vitality of the church. Forty percent of women say the church is growing, and 41 percent describe it as thriving. Among men, only 32 percent think it is growing, and 34 percent label it thriving.

Although most Hispanics believe going to church is expected (55 percent), attendance is considered useless by 1 in 5 – almost double the rate of the population as a whole.

Whites are among the least likely to consider church useless (8 percent), but 60 percent believe the church is declining.

In contrast, most African-Americans believe the church is growing (55 percent) and thriving (56 percent). More often than other groups, they describe church attendance as common (74 percent) and popular (61 percent).

“The longevity of the Christian church proves it is not a fad,” McConnell said. “Some Americans feel cultural expectations to attend church, but our recent research shows that those who actually do attend hold more closely to the teachings of Jesus Christ.”

Methodology: The phone survey of Americans was conducted Sept. 19-28, 2014. The calling utilized random digit dialing. Sixty percent of completes were among landlines and 40 percent among cell phones.

Maximum quotas and slight weights were used for gender, region, age, ethnicity and education to more accurately reflect the population.

The completed sample is 1,000 surveys. The sample provides 95 percent confidence that the sampling error does not exceed plus or minus 3.4 percent. Margins of error are higher in sub-groups.

By Don F. Mabry ALEXANDRIA, La. (LBM)-- The number of churches in our country constantly is changing and it is very difficult to acquire information from the various denominations, but estimates indicate that there are 330,000 Christian churches and congregations in the United States today. But the question … END_OF_DOCUMENT_TOKEN_TO_BE_REPLACED