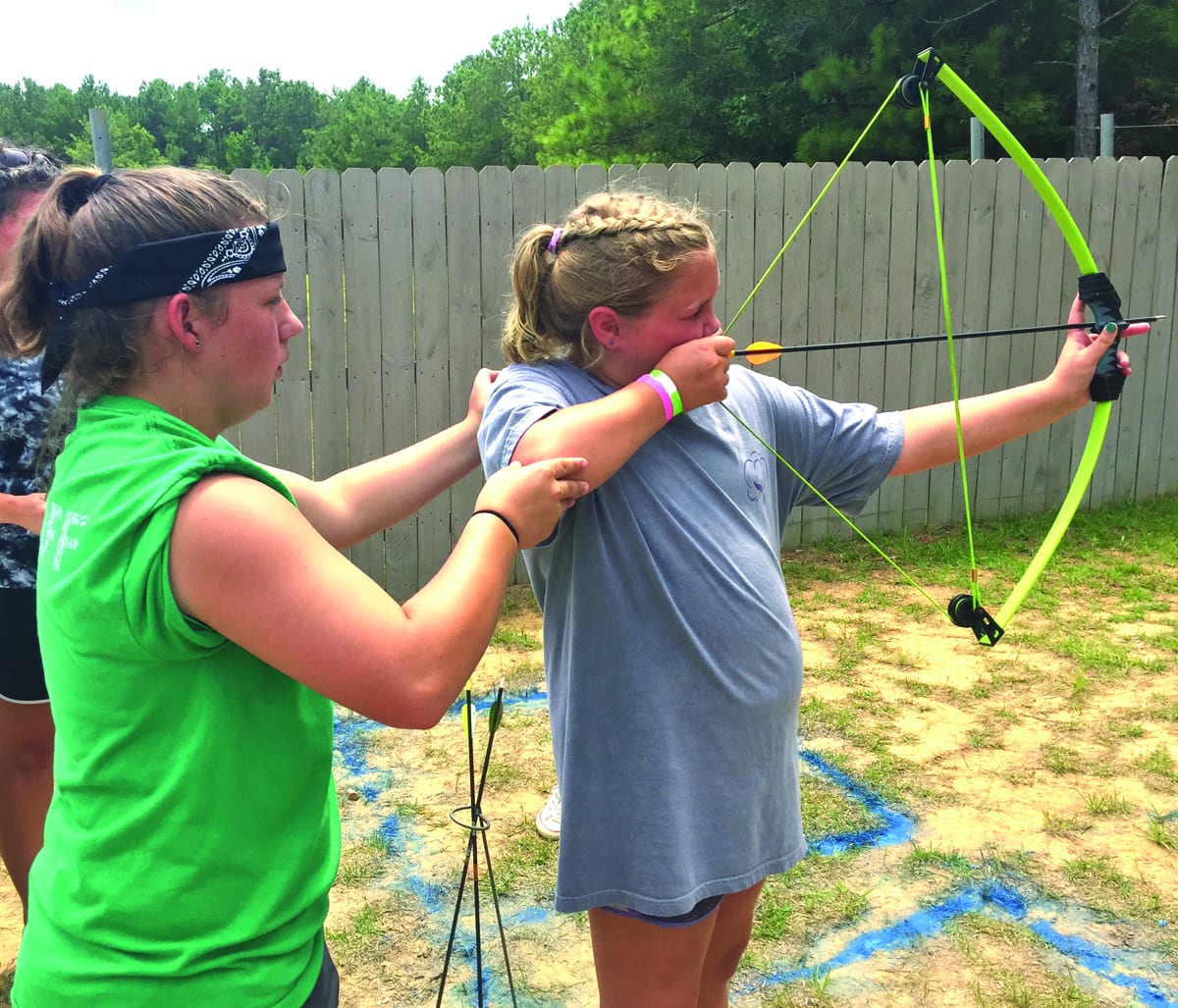 Activities like bow and arrow shooting will return this summer when Louisiana Baptist camps will again host guests. The COVID-19 closed most camp events in 2020. Brian Blackwell photo

ALEXANDRIA, La. (LBM) — After a year that saw most activities come to a halt by COVID-19, and facilities battered by hurricanes, tornadoes and major storms, the state’s Baptist camps are gearing up for a busy summer.

“COVID-19 had huge effects on us and many other camps in 2020,” Josh Bumgardner, director of Tall Timbers Baptist Conference Center, told the Baptist Message. “This is the first time in our history that we did not host or program overnight summer camps for our churches. Summer is the focal point for our year and not having camps – understandable, with the ongoing pandemic — was a huge loss to our staff and to our churches. Most of our other retreats and guest groups cancelled throughout the year, too.”

But so far (mid-April) in 2021 the camp has filled 1,925 spots, with space for an additional 1,325 guests.
Bumgardner said his staff has worked hard over the past year to work on upgrades to the new Dogwood Cabin, renovations to hotel rooms at Lee Lodge, as well as repairs to the activity building and Indian Creek Lodge that sustained damage from Hurricane Delta.

He asked for continued prayers for his staff and guests, and, also for other Christian camps across the state as they continue to navigate unchartered waters.

“I think all of us personally have gone through the range of emotions since the pandemic began last March,” Bumgardner said. “The majority of our ministry is to serve the people who come on the grounds of Tall Timbers. When nobody was able to attend or be here in person, I think we all grieved that loss in 2020. We trust that God has been working in the lives of our churches and guests when they were not able to be here in person, and we are ready to continue participating in the camp ministry as things continue to open up again.”

But the staff was creative in finding other ways to minister during the interim.

The camp held a Farm and Family Trade Day that drew more than 50 vendors and 600 participants, Fourth Friday Fish Fry meals, a winter kids retreat, a couples retreat and a Fourth of July celebration that included a boxed hamburger meal and a firework show. Camp Director Bubba Mills and his wife Mandi even ventured 40 miles southeastward to Natchitoches to distribute Bibles and remind more than 500 children who came to a Santa Claus House in December that Jesus is the reason for the Christmas season.

Mills said that he hopes Clara Springs Baptist Encampment, which has plenty of space remaining for camps and retreats, can be an encouragement to churches who have supported them throughout the pandemic.

“Financially, it has proven to us again how our God is always faithful,” Mills said. “As bills came in, God stepped in and provided through fellow believers in Christ. We did not allow COVID-19 to stop our ministry, but we did have to be creative.”

Dry Creek Baptist Camp experienced the same virtual shutdown the pandemic thrust on all the other camps, but also suffered damage from Hurricane Laura and Delta, as well as a fire in February. But the staff is encouraged by the response for this summer. Registration numbers had topped 710 in April, and hopes are high for filling the 890 remaining openings.

“Thank you for the support and keep it coming,” Aaron Watkins told the Baptist Message. “Ministry changed for a while when the restrictions set in from the pandemic, but the outpouring of encouragement kept us going. The people who have loved the camp for years understood not having groups here meant we had no money coming in; and we saw the faithfulness of God through his body of believers who supported us through some very slim times. We can’t say ‘Thank you’ enough for those who have loved on us, and supported us, and prayed for us.”

He was equally grateful for the volunteer work completed by construction teams who renovated dorms that will lodge overnight guests.

James Newsom, director of Acadian Baptist Center in Eunice, reported that more than 2,300 guests had registered for camps, leaving only 100 open spots for this summer.

Newsom said the camp – which since January has hosted a men’s retreat and its first-ever disc golf tournament – is excited about the busy summer ahead. Not only will they host several camps, but on July 10 will dedicate a $3 million, 18,000-sq.-ft. facility that was finished May 13, 2020.

“Pray for people to feel comfortable sending their kids to camp and for those attending this summer,” he said. “Camp is such a great evangelistic opportunity and a chance to really grow spiritually.

“I would encourage churches to use their local camps,” he continued. “Your support will help us continue our ministry for years to come.”

When Gov. John Bel Edwards announced restrictions in late March 2020, a Campers on Mission group had to stop a work on a dormitory at Camp Living Waters in Loranger. Nearly a year later, they are working feverishly to complete the project that included putting in a new air conditioning unit, water heater, beds, and giving the facility a fresh coat of paint.

Scott Mercer said the renovations should be finished in time for the first group of summer guests. The camp already has registered 350 guests but still has 300 openings to fill.

“The phones have begun to ring again after months of nothing,” Mercer said. “We offer great programming that is affordable; and we can cater to small and large churches.

“The shutdown put us into hibernation, and we questioned whether we would open,” he said, “Now we are starting completely over. I am ecstatic people are back on campus because it was the worst thing not to be able to minister to people. But we are gearing up to share the Gospel again which is ultimately what we are all about.”

Bethany Camp and Conference Center, which hosted 360 people combined from two summer camps in 2020 and four Disciple Now weekends and other retreats this year, is expecting to welcome many more guests to the campground this summer.

Trey Miller, interim camp director, said his team greatly appreciates the volunteers who renovated the facilities and are so grateful to churches who gave financial and emotional support during a difficult season. He also was overjoyed that returns on investments with the Louisiana Baptist Foundation helped cover some of the construction costs.

“I’ve been here 10 years and this last year was terrible,” Miller said. “The kids bring all the energy, and in 2020 there was no energy. I am so excited the kids are coming back.

“Despite what was a hard year, we were encouraged by such a strong community base,” he continued. “So many of the churches were struggling in the months after the shutdowns, but they still kept us afloat.”

“We knew that we couldn’t host groups overnight,” Justin Busby said. “We also knew God brought us here to do ministry, so we couldn’t just sit around and do nothing. Most of the kids at the day camps were attending the first event since the shut down and were so excited to be able to be out and do something. Even in the middle of the pandemic, we reminded them God is in control, and if He is in control, it’s all good.”

Busby, who is the camp director, said the ministry team is excited about the more than 200 guests who have registered to attend camp this summer, and added that 230 spots still are available.

After hosting 75 people at two daytime camps and another 20 families for afternoons of fishing and swimming during the summer of 2020, Seeker Springs Baptist Camp in Eros is gearing up to welcome a full slate of camps this year, although just 140 of the 400-500 available slots have been filled so far.

“We feel like God has done some great things in the midst of a pandemic, hurricanes and a tornado, and I think He is preparing us for what He wants us to do in the future,” Terry Slawson, camp director, said. “This summer we are training and discipling our summer staff so they can be mission ready for the groups that come in for summer camp.”

By Rebecca Holloway PINEVILLE, La. – For years, I have read and heard the statement, “We need to hold life/our family/our possessions with an open hand.” The idea is that we are not in control of our lives or anything else on this planet. God is in complete control of all things and has the power and right to … END_OF_DOCUMENT_TOKEN_TO_BE_REPLACED