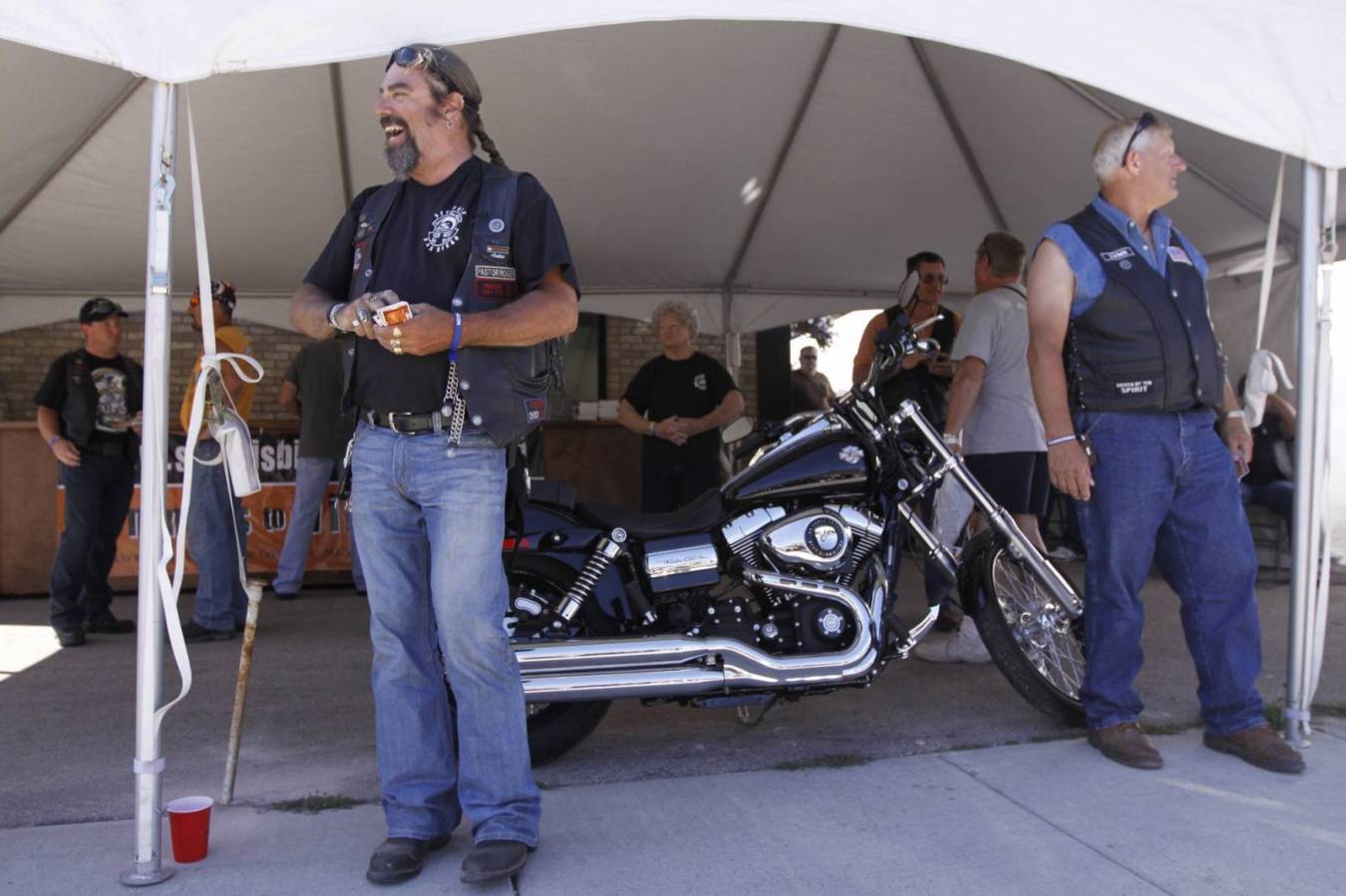 BP file photo Sturgis, population 6,000 for 358 days a year, will swell to hundreds of thousands for the milestone, drawing every kind of person, from the unique to the dangerous. Buck Hill, director of missions for the Dakota Baptist Convention (which includes both Dakotas), said volunteers are anticipating more miraculous moments of newfound faith akin to what they've seen during 10 years of outreach at Sturgis.

STURGIS, S.D. (BP) — Amid thousands of bikers, often with debauchery nearby, Southern Baptist volunteers will share their redemption in Jesus during the 75th annual Sturgis Motorcycle Rally, Aug. 3-8 in South Dakota.

Baptist volunteers Roger Persing and Lyn Hanson work to draw passersby into a hospitality tent at the Sturgis Motorcycle Rally in 2010 where they heard testimony of God’s power to change people.

Hill and a team of 200-plus volunteers have a tight, proven plan for sharing the Gospel at a 40-by-30 tent on one of the town’s streets. The volunteers venture to Sturgis from across the Midwest, Southeast and elsewhere to work one of four three-hour shifts each day.

“Catchers” — those who invite guests into the tent — greet passersby, telling them they will be registered for a giveaway of a $21,000 Harley Road King if they go into the tent and listen to a three-minute Gospel presentation, which is the presenter’s personal testimony of their life before Christ, how they came to know Christ and their life since salvation.

“This is how we do it, no other way,” Hill said. “Our catchers ask for three minutes, and three minutes is all we take.”

An estimated 35,000 people have accepted the invitation to hear the testimony and register for the bike over the years, and 6,000 have prayed to receive Christ — an outstanding return rate for evangelism at a mass event.

It will be organized chaos at the tent as volunteers shine a light in the darkness.

“Normally in Sturgis you can see all of the buildings,” Hill said. “But if you only came to the rally, you’d have no idea what Sturgis looks like. There are campsites all over the Black Hills. They stay for 100 miles all around.

“When dark comes, it can really get crazy,” Hill said. Most of the people at the rally aren’t misbehaving, but the “one-percenters,” as Hill calls them, make up for it.

“There have been shootings and stabbings, usually out in the campgrounds. There are people walking around in very offensive clothes … but we have well-dressed people too. The gangs are there, and we’ve had them stalk our tent just to see what we’re doing.

“But many police officers come from all over the country — on their own time — and work 12-hour shifts. They walk in groups. They walk by our booth because they know who we are, so we have a good working relationship with the police. We feel protected.”

Follow-up with those who prayed to receive Christ, though a constant challenge, has improved over the years. “We log those who’ve made decisions into a database,” Hill said. Each volunteer is given a number and receives information on whom he/she led to Christ. And every name is sent to the Evangelism Response Center of the North American Mission Board on a daily basis.

“We make sure the volunteers — the critical person — call Sally and talk to her and check up on her to see if she found a church home or what they can do to help her. Some people have kept up with who they led to Christ for years,” Hill said.

There are some challenging moments in the tent, but Hill and his team have a contingency plan for most everything.

“We get families with small kids, and yet we’ve had women come under the tent who were ‘painted’ like they had clothes on,” Hill said. Immediately a female human shield forms around the painted lady, and a woman shares the Gospel.

Among the salvation stories Hill recalls from the Sturgis outreach:

— “A husband and wife with kids come under the tent, and we begin sharing the Gospel. Almost simultaneously tears are running down their eyes. Both pray to receive Christ. She says, ‘OK, now we need to go.’ Some tell her not to rush, but she says, ‘You don’t understand, we just prayed for a brand-new life. If we believe what we just said, we don’t need to stay here. We need to go home and start our new life.'”

— “The son of a Southern Baptist preacher came in. This story is sad and funny at the same time. He just wanted to sign up for the bike. His name was Joe. He said, ‘I know I’ve got to listen to this, but it’s fruitless.’ His dad was a preacher but he had never accepted Christ. He did that day.”

— “A man came to the tent and prayed to receive Christ. He had been estranged from his family, but he went back to his family and went back to church. It was taking some time for the family to believe the change. The man came back in the next year with his son. He explained how he was back with the family, but he said, ‘I want you to tell him what you told me.’ The son prayed to receive Christ. He had seen the change.”

“When people say, ‘This won’t work, you can’t lead people to Christ in three minutes,’ I tell them, ‘You’re right, because it’s not us that lead them to Christ. It’s the Holy Spirit.

“I know what I see. I see the evidence.”

Check out www.sturgisbikegiveway.com for more information.

By Joe McKeever RIDGELAND, Miss. – “You shall know that the Lord has sent me to do all these things, for this is not my doing” (Numbers 16:28). “Lord, God of Abraham, Isaac, and Israel, let it be known this day that You are God in Israel and I am Your servant, and I have done all these things at Your word” … END_OF_DOCUMENT_TOKEN_TO_BE_REPLACED