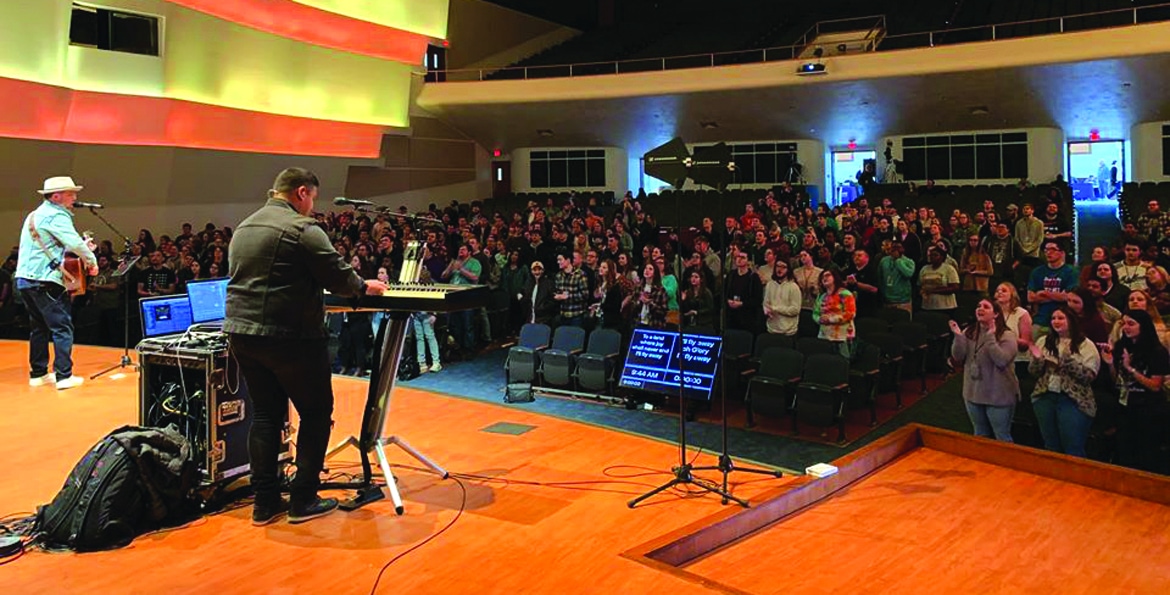 Students from across the state enjoyed a time of worship at the annual Collegiate Evangelism Conference. The Jason Lovins Band led the worship sessions, Feb. 14-15 at Louisiana College in Pineville. Brian Blackwell photo

“If you want to thrive in your faith, you must be devoted to the Word,” said Doughty, pastor of First Baptist Church in Monroe.

Doughty’s message was part of a two-day conference that included seminars designed to equip students with sharing their faith, worship by the Jason Lovins Band and a late-night time of fellowship. Held Feb. 14-15 at Louisiana College in Pineville, the conference drew students from 15 BCMs.

His message and the focus of the various breakout seminars were centered on the theme, “Thrive.”

Citing 2 Timothy 3:14-4:4, Doughty told the students the Bible is God’s Word, reveals the Gospel truths, enables them to become more spiritually mature and keeps them from following false teaching. And to truly thrive, he said, they must desire, read and apply God’s Word.

“If we want to see people changed by the Gospel, we must be people that preach the whole counsel of Scripture,” he said.

Mark Robinson, Louisiana Baptist state BCM director, said he was pleased with the student response to the challenge to thrive on their campuses, communities and beyond.

“You would be amazed if you could see the differences in the cultural variety at each college campus in our state,” Robinson told the Baptist Message. “It’s the same with churches. Each has its own narrative of experiences, jokes, allegiances and even a unique language pattern. However, they are developed around a basic philosophy of reaching students for Christ, strengthening them in their faith, connecting them to a lifelong relationship with the local church and mobilizing them to share the Gospel worldwide.

“When this variety of students come together in a conference like Louisiana BCM’s Collegiate Evangelism Conference built around corporate worship, spiritual training, cross campus dialogue and recreation their walk with Christ gets better through the influences of others,” he continued. “When they hear a strong message from a local pastor like James Doughty or local church college pastor Stephen Daigle plus a super bonus appearance of a college president like Dr. Rick Brewer and testimonies from a nationally known worship band like the Jason Lovins Band — that grew out of a weekly worship team from Morehead State BCM — students get stronger and catch a vision for who God has created them to be in life. CEC accomplished that well.”

In his message Saturday, Stephen Daigle challenged the students to pursue a calling rather than a career.

“God’s got a greater story for your life than the degree that you’re getting,” said Daigle, associate pastor at Celebration Church in Metairie. “Look what God can do with your life if you will just sell out to Him. He wants to do more with your life than you could ever ask or imagine.

“Your calling is greater than your career,” he continued. “You can expect a life of meaning and purpose. Life is short. You are making all these plans for your life. You don’t know what is going to happen tomorrow. Why waste any moment of your life that isn’t Jesus. You can leverage your life in such a way that you’re legacy is going to impact the next generation.”

Daigle shared how he secured the perfect job in the financial industry after his 2010 graduation from Tulane, but that an encounter with the Holy Spirit while on an overseas trip led him to pursue ministry.

He encouraged the students to read their Bible daily, have a consistent prayer life and seek guidance from the Holy Spirit so they, too, do not miss God’s calling on their lives.

“You could waste your life following the American Dream,” he said. “Because God’s dream for you is bigger.”

LC President Rick Brewer closed the conference by urging the students not to compromise their faith.

Citing Genesis 40, Brewer said Joseph served as an example of someone who refused to give into temptation and in the end was promoted the second in command of Egypt.

“As you are going through a season of frustration, God is using it as a source of preparation,” Brewer said. Are we living in such a way that our lives don’t make sense to those who don’t know Jesus? Are we salt and light? Are we countercultural?”

Patricia Reed, a senior at Northwestern State University in Natchitoches, enjoyed the encouragement offered by the speakers and breakout leaders to shine for Christ on her campus.

“I need to stop making excuses and be more devoted to God’s word,” Reed said. “It’s easy for us to go to events like this out of obligation but we must commit ourselves to be still and just enjoy His presence. When I get back to campus I am going to sit more with God.”

Kaleb Watson, a senior from Nicholls State University in Thibodaux, enjoyed the fellowship.

“I always enjoy being around godly people at CEC,” Watson said. “The speakers reminded me of the importance to read the Bible and apply it daily to my life. The Word creates such a solid foundation for me to make a difference for Him.”

By Steve Horn ALEXANDRIA, (LBM)--You might be tired of hearing that we are living in unprecedented days, and, of listening to endless reports about the crisis, quarantine, social distancing, stay-at-home orders, and flattening the curve. I know I am. So, how about some good news? Our churches are … END_OF_DOCUMENT_TOKEN_TO_BE_REPLACED