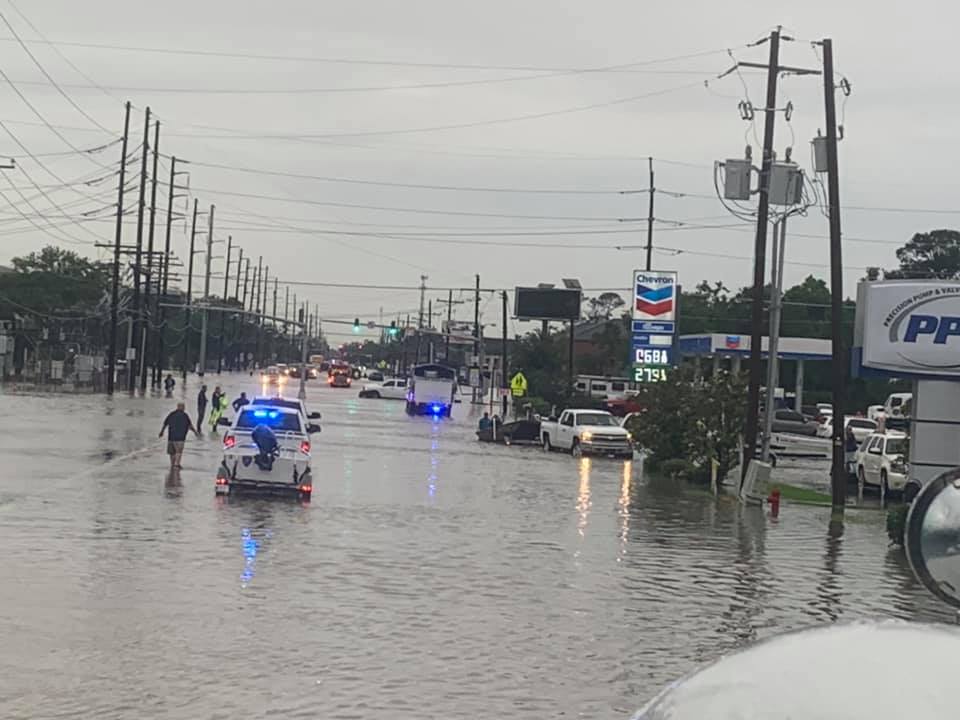 LAKE CHARLES, La. (LBM) – Heavy rainfall on Monday, May 16, dumped up to 15 inches in parts of southwest Louisiana and other areas of the state still recovering from Hurricanes Delta and Laura that devastated the region last year.

“We know that this situation is becoming a little too familiar for a lot of us in Lake Charles,” Lake Charles Mayor Nic Hunter said in a video update on the city’s Facebook page. “This is another challenge, but it is not a challenge that we are not capable of handling.”

Accuweather said the rainfall on Monday was the third-wettest day on record for Lake Charles. According to the National Weather Service, more than 15 inches of rain fell in south Lake Charles and other areas received up to 12 inches of rain. The excessive rain caused flash flooding that stranded cars in city streets and sent water inside homes.

The Advocate newspaper reported that 10-12 inches of water fell in the Baton Rouge area, flooding streets and stranding some motorists m in their cars.

Motorists also were stranded at the intersection of Camellia Blvd. and Johnston Street in Lafayette, KLFY reported.

Two dozen personnel utilized nine boats from the Louisiana State Fire Marshal for deployment to the Lake Charles area on Monday to assist Lake Charles Fire Department crews with flood response and during one hour on Monday night had responded to more than 30 rescues or requests to rescue.

The Calcasieu Parish Sheriff’s Office also handled numerous flood related calls and reported all areas of the parish were experiencing flooding on the roadways and conditions were deteriorating and changing quickly.

“CPSO has deployed high water vehicles and boats on both sides of the parish and we are prepared to handle any flood related call we receive,” stated Sheriff Tony Mancuso.  “We are urging all residents to be vigilant and keep an eye on the evolving weather situation.”

Stan Statham, Louisiana Baptists state disaster relief coordinator, said assessors and chaplains will be activated once they are able to gain access to impacted areas. He added that an incident command center will be established today, though the location was not yet determined.

“Pray for those impacted,” Statham said. “I know of one family that just got back in their home after it was damaged from Laura and it flooded yesterday.

“Also pray for volunteers, many of whom are still fatigued from last year’s hurricane season,” he continued. “The Lake Charles area is still rebuilding and (Carey Baptist Association Director of Missions) Bruce Baker has been at the center of those efforts and will again be instrumental this time. Pray for him specifically.”

The excessive rainfall prompted Gov. John Bel Edwards to has issued a State of Emergency Declaration on Monday.

“Water rescues and other emergency actions have been necessary (Monday) afternoon as heavy rainfall fell across Southwest Louisiana,” Edwards said. “The Governor’s Office of Homeland Security and Emergency Preparedness (GOHSEP) stands ready to support our local partners with any emergency resources needed beyond their capabilities. We are only a few weeks away from the start of hurricane season, but this threat is the latest in a string of recent weather threats that remind us of the importance of preparedness and staying informed. And as the weather threat continues this week, I implore Louisianans to monitor their local weather forecasts and follow all instructions from local leaders. Go to GetAGamePlan.org to help finalize your emergency plans. Those plans should start with getting a COVID-19 vaccination for you and your family in case evacuations and shelter operations become necessary. Monitor your local media, the National Weather Service office for your region and download the free ALERT FM App to stay weather aware.”

By Rebecca Holloway PINEVILLE, La. – For years, I have read and heard the statement, “We need to hold life/our family/our possessions with an open hand.” The idea is that we are not in control of our lives or anything else on this planet. God is in complete control of all things and has the power and right to … END_OF_DOCUMENT_TOKEN_TO_BE_REPLACED