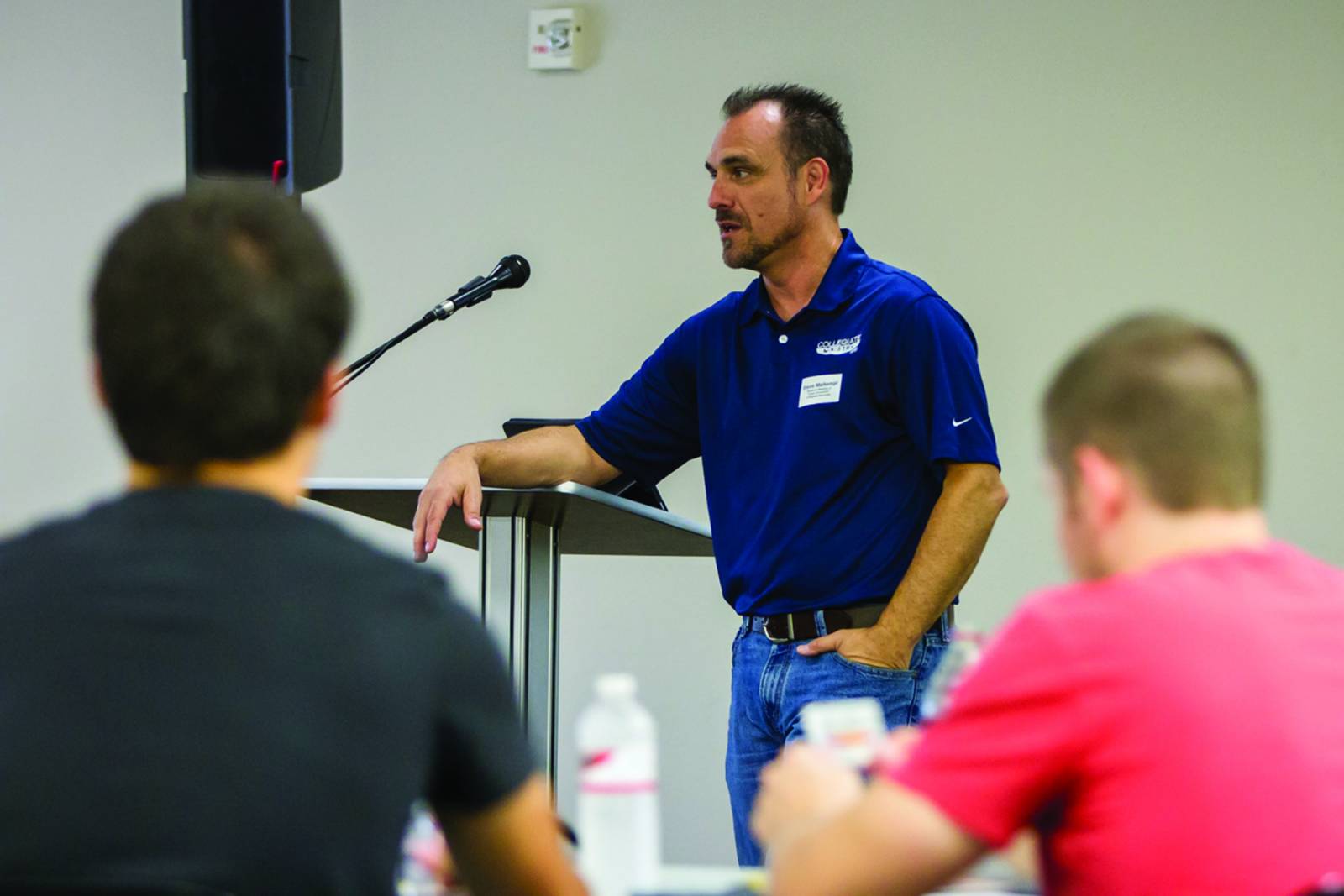 Steven Maltempi, shown introducing himself to the college interns before a training session began, was introduced as the LBC’s new youth strategist at YEC. He assumes his new role on Dec. 1.

ALEXANDRIA – A long-time student ministry specialist with strong ties to Baptist life in the state is the new youth strategist for Louisiana Baptists.

Steven Maltempi assumes his new role on Dec. 1 and will be introduced during a youth ministers fellowship at next week’s Youth Evangelism Celebration in Lafayette.

While attending seminary, Maltempi said God placed in his heart a a calling for student ministry. Though he enjoyed serving in Texas, Maltempi said he is looking forward to what lies ahead in his home state of Louisiana.

“As Louisiana Baptists we must have as our goal to evangelize, disciple, and involve students in ministry and missions,” he said. “When they graduate from high school they must be ready to minister at work or college. To prepare them we must capture their imaginations and passions for Christ.

“Teenagers are a mission field and a mission force,” he continued. “Our focus must be evangelism; discipleship, much more than a transfer of knowledge; and letting students engage in ministry and mission on an ongoing basis.”

Before assuming roles at the state conventions in Texas and Virginia, he served as student and collegiate pastor at Ironbridge Baptist Church in Chester, Va. But much of Maltempi’s life has been spent ministering in his native state.

New Louisiana Baptist youth strategist Steven Maltempi enjoys a few moments with his family. Maltempi has worked as a youth minister at several churches in Louisiana and earned degrees from New Orleans Baptist Theological Seminary and Louisiana Tech University. He assumed his new position on Dec. 1.

He and his wife, Joy, have three children, Joe, Rebekah and Abigail. A fourth child passed away on Feb. 1, 2013, after a six-year battle with brain cancer.

“We’re excited about Steven coming here,” said Wayne Jenkins, evangelism and church growth director for Louisiana Baptists. “He’s got local church experience as a minister of youth. He’s got state convention experience as a youth and college strategist both in Virginia and Texas. So he understands the role of both the local church and his responsibilities in working with local churches. He’s from Louisiana, so he knows Louisiana.

“I think there’s lot of positives,” he said. “We look forward to his leadership in this area.”

“We are excited to welcome home Dr. Steve Maltempi and family,” Hankins said in an e-mail statement. “Steve was born and raised in Louisiana and has effectively served the Lord in local churches and denominational positions in Louisiana, Virginia and Texas. God placed a call on his life for student ministry in seminary and in Steve’s own words ‘that calling has never wavered.’”

“I’m confident God will use Steve to lead Louisiana Baptists to reach and engage the next generation as we move towards our 2020 objectives and beyond,” he continued. “Please join me in praying for Steve and his family as they return home and begin their ministry among us.”