Members of Lakeside Baptist Church in Pineville prayed with others and shared the Gospel with individuals who received 400 crosses near a heavily traveled section of Hwy 28 in the city. By the end of the day, 14 new converts had placed their trust in Christ. Submitted photo

PINEVILLE, La. (LBM) – A parking lot along a heavily traveled highway in Pineville was transformed into a harvest field that produced 14 new converts for Christ during a pre-Easter outreach, March 13.

In all, 25 members from Lakeside Baptist Church in Pineville either directed motorists to the parking lot, prayed/shared the Gospel with others on-site, or distributed 400 crosses (half were 2-feet tall, the other half 5-feet feet high).

Lloyd Bye said this was the largest evangelistic effort in the 20 years he has served as pastor of the congregation, which averages 50 for Sunday morning worship services. One person who received a cross has visited the church and Bye is praying additional people will do the same.

The event was born out of the “Increase Challenge,” a five-step action plan in effect through May 31 that was issued to pastors of the CENLA Baptist Association. Lakeside and other area churches were encouraged to find a way to focus on actions that can move people to understand the Gospel clearly and then respond in faith.

Bye said the event was a way for some of his members to share their faith for the first time. They had been trained recently, taking part in four evangelistic training sessions on Wednesday evenings prior to the cross distribution.

“People are scared sometime to let others know about Jesus,” Bye said. “My people jumped deep into the water.”

Among the people who came to Christ was a man who received three crosses but did not know what they represented.

“I asked him what God requires of him to get into Heaven and he did not have an answer,” Bye said. “I led him to Christ right there. He was like so many who love getting a cross around Easter time but don’t know its message.”

The crosses were made by Vic Bass, founder of the Cross Ministry in Dibold, Texas. Since 2015, Bass has produced 250,000 crosses that have been distributed in all 50 states and four countries.

He said the crosses seem to resonate with others and provide an avenue to share the Gospel.

“It’s had a big impact all these years because it’s not white or black, Baptist or Pentecostal,” he said. “It’s the simple message of Jesus Christ and that’s what people are thirsty for today. He’s the life changing message that can bring this world hope.” 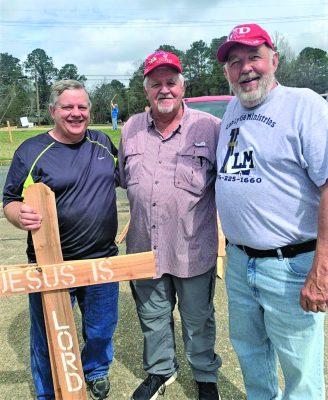 Randy Pilcher, a member of Cross Ministry in Dibold, Texas; Lloyd Bye, pastor of Lakeside Baptist Church in Pineville, and Leo Lytle, an evangelist and professional wood maker in Pine Valley, Texas, were part of a distribution of 400 crosses in Pineville in mid March. Submitted photo

Leo Lytle, a professional wood maker in Pine Valley, Texas, and a former pastor of Lakeside Baptist and several other Louisiana Baptist churches, traveled with Bass to share the Gospel during the distribution of the crosses.

“What impressed me was when we arrived on that Saturday was how his people were trained and ready,” he said. “When the cars started pulling in, they started talking to them.

“I like this way of evangelism because the church in America is going to have to get outside the walls,” he continued. “If we are going to reach a lost and hurting world, we have to reach them where they are.”

Church member Michelle Bordelon said that the Wednesday night evangelism training sessions helped her feel more at ease when she approached people to start a conversation about Jesus. She said most people she met were familiar with the cross and were open to hearing about the message behind it.

“God’s timing is perfect, and it is amazing to see how He orchestrated all of this to fit together perfectly,” she said. “Our church has been praying for the souls that we would come in contact with, and it was amazing to be there and see how well everyone and everything worked together to bring others to Christ.”

Bye said the congregation plans to host another cross distribution, in late May, on a roadway near the church. He is excited, anticipating how the Lord will use this tool to reach others for Christ and continue his congregation’s evangelistic zeal.

“It’s a way of us getting outside the walls of the church,” Bye said. “These crosses are like a bait when you go fishing. That cross is a bait that speaks all by itself.”

By Chuck Kelley Rarely does Hollywood contact a Southern Baptist seminary, but rarely is not never. One day location scouts for a major motion picture to be filmed in New Orleans called NOBTS and asked to tour the campus. They were looking for a place that with a bit of movie magic could be made to look like the … END_OF_DOCUMENT_TOKEN_TO_BE_REPLACED