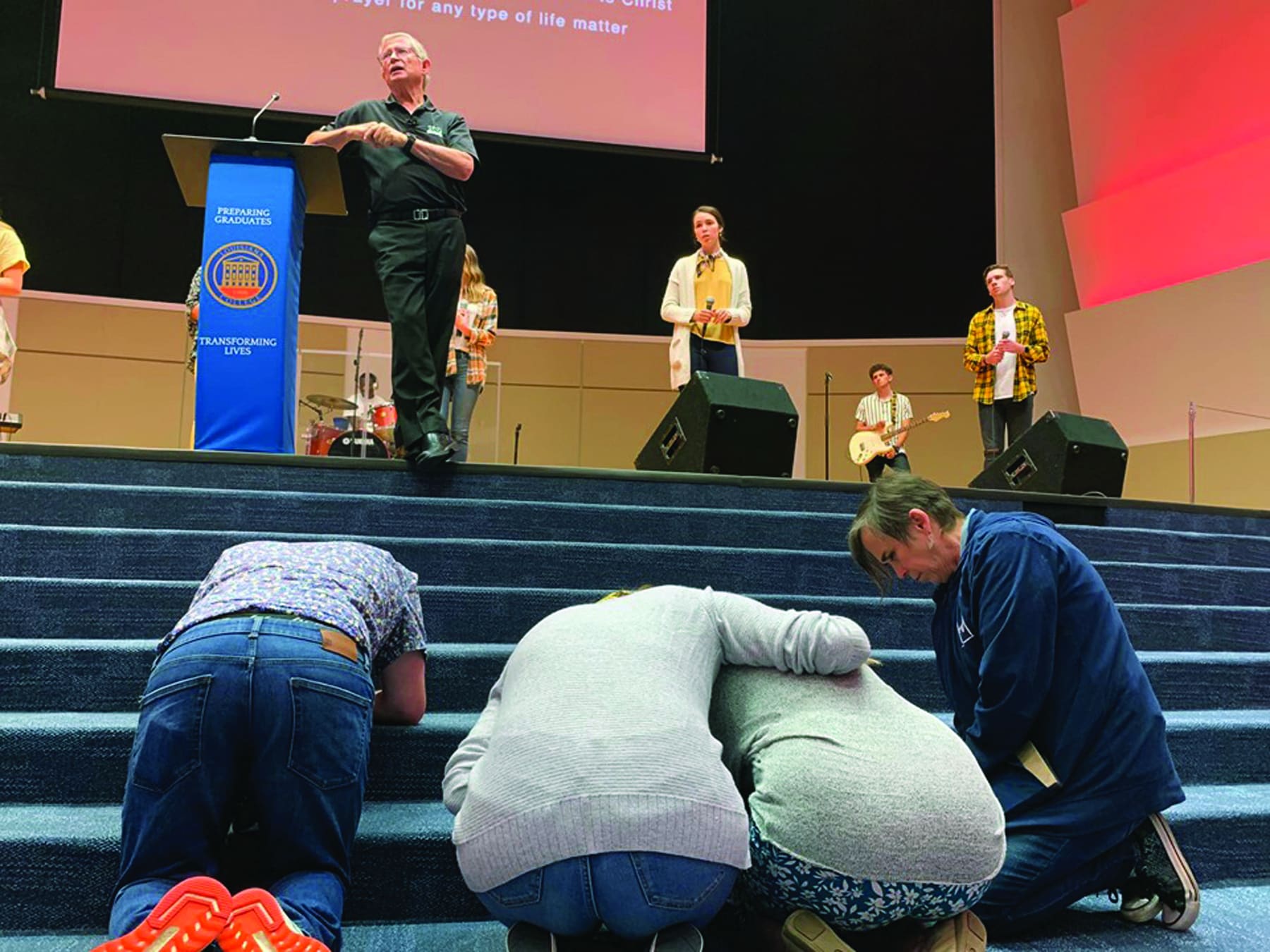 A Louisiana College staff member prays with students at the close of the first day of the campus revival. Seven students repented and professed Christ as Savior during the three-day revival, September 17-19., while countless others sought prayer. Brian Blackwell photo

PINEVILLE (LBM)–During the campus revival at Guinn Auditorium, Sept. 17-19, seven students repented and professed Christ as Savior, 20 repented and restored fellowship with the Lord, and, countless others sought prayer.

The seven new believers are among 57 students who have surrendered their lives to Christ since the start of the fall semester — 25 during a seminar on personal evangelism in August.

LC President Rick Brewer told the Baptist Message the college’s faculty and staff and local pastors have prayed many months for God to move among the students.

“The awakening has just begun,” Brewer said. “We can sense what God is doing here. We’re excited and are anticipating a mighty movement of the Holy Spirit.”

Already, faculty and staff as well as local pastors have begun discipleship training with the 57.

In fact, the college has developed a study guide, “Joy Through Suffering,” as part of this semester’s eight-part chapel series on 1 Peter. It will be used to disciple new believers, Baptist Collegiate Ministry meetings will feature the studies, and, 35 discipleship small groups which meet weekly will use it for in-depth discussions.

“As we launch our year-long emphasis on the study of 1 Peter, I can’t think of a better person to start us off than Don Wilton,” Brewer said of his long-time friend.

In his messages, Wilton urged students to turn to Christ, telling them that God values them, and, he encouraged them to keep Him first, now, and after graduation.

“I want to thank God because He’s given you, through the new birth, a living hope,” he said. “You are not hopeless. You have a reason to live. You’ve got a purpose. You’re not a nobody. You’re somebody in and through the Lord Jesus.”

He reminded those who have placed their faith in Christ that they are not residents of earth, but strangers in a foreign land.

“You don’t fit in,” Wilton said. “You’re different. If, in fact, you are who you say you are, you’re a stranger. We don’t march according to the norm. Let’s just let God be God.”

Wilton pleaded for students to live for Christ and to endure trials with confidence, knowing they will be rewarded by God if they stand for the truth.

“It’s becoming increasingly difficult to be a Christian living in the world in which we find ourselves,” he said. “We’re going to face situations where we simply have to make the commitment, ‘I’m a Christian and I’m going to live according to the way Jesus told me to live.’”

By Joe McKeever Freely you have received; freely give. (Matthew 10:8) JACKSON, Miss. (BP) -- Dr. Watson was complimenting Sherlock Holmes on a brilliant observation no one else had noticed. "Of course," Holmes remarked. "It's what I do." Forgiveness and grace -- that's what we believers do. Here is … END_OF_DOCUMENT_TOKEN_TO_BE_REPLACED