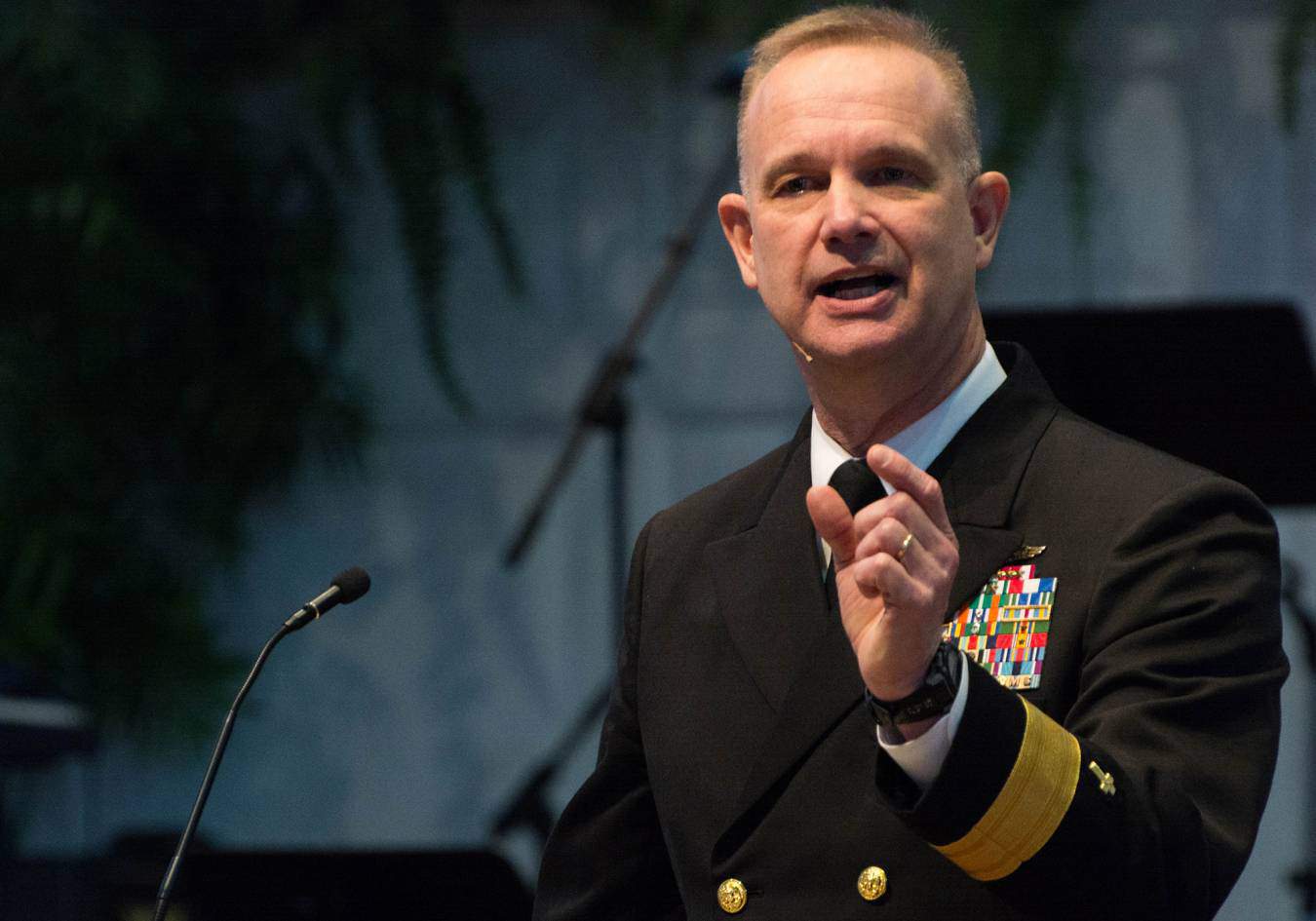 The Feb. 8 service included the commissioning of a new Navy chaplain.

“It is a special day on our campus because we are focusing our attention on a very particular calling in ministry, one which does not get much attention — that is, the chaplain,” Kelley said. “They make a great impact.”

Kelley noted chaplains serve in settings ranging from “military to hospital to industry.” More than in some fields of ministry, Kelley added, chaplains are “expected” to lead out in spiritual conversations.

“They expect a chaplain to be a representative of faith,” Kelley said. “This is a high calling indeed.”

Lee’s 35-year military career includes more than 10 years in the Marines and 22 years as a Navy Reserve chaplain, encompassing deployments overseas and mobilizations to New York City following the September 2001 terror attacks and the Gulf Coast in the aftermath of Hurricane Katrina. Lee currently is the Navy’s deputy chief of chaplains for reserve matters at the Pentagon and a former NOBTS faculty member. 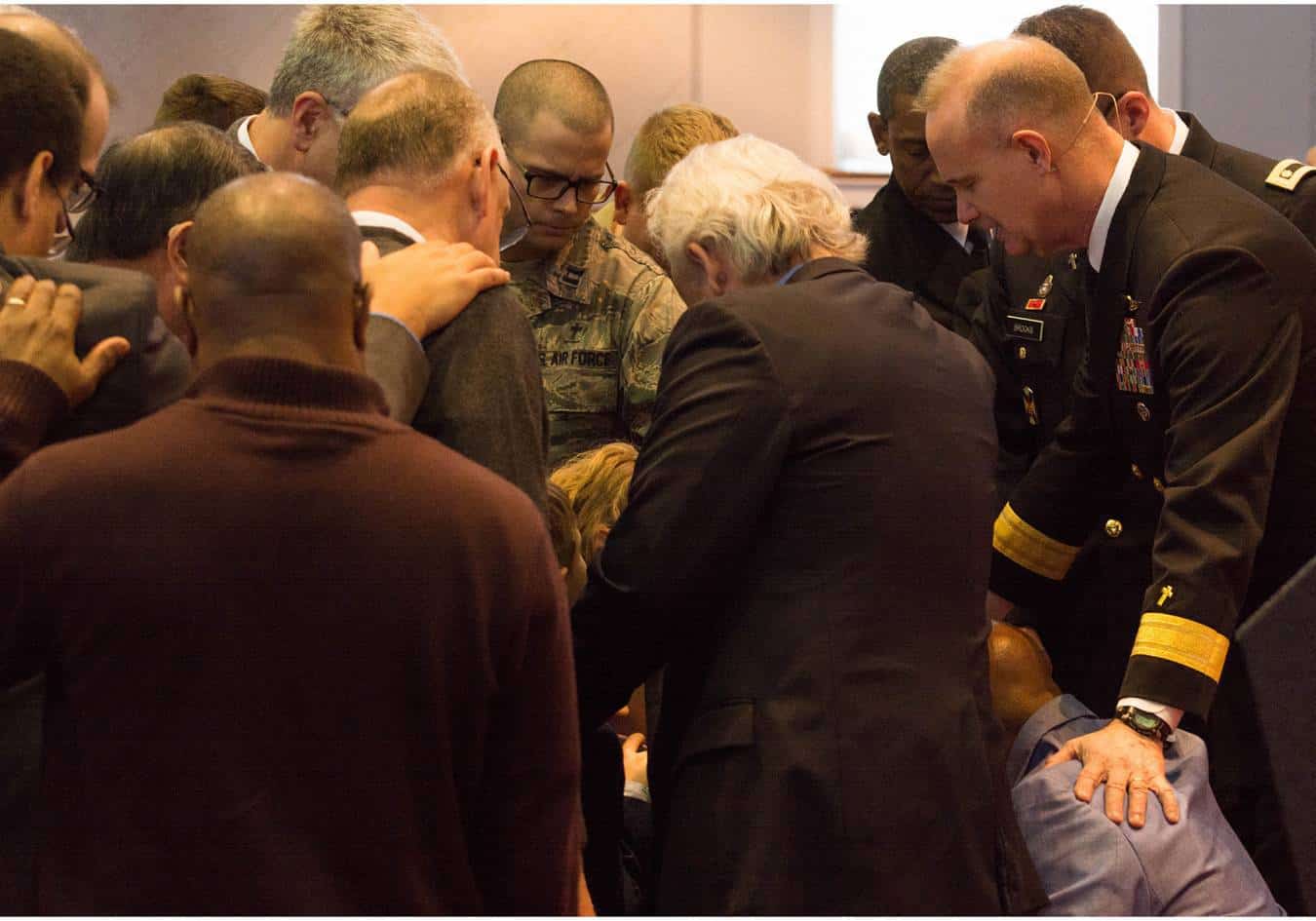 Students and faculty members at New Orleans Seminary gather around Joshua Holland and his wife Taran for a prayer of commissioning during a chapel service with Rear Admiral Endel Lee (right). Photo by Dennis Phelps

During the commissioning ceremony, Lee charged Joshua Holland, with his wife Taran Holland at his side, with “carrying on the legacy of chaplaincy.” Holland holds a master of divinity degree from NOBTS and is currently enrolled in the doctor of ministry program. Holland also serves as a pastor at Level Ground Community Church in the Hollygrove neighborhood of New Orleans.

Lee gave Holland a Presidential Prayer Team coin and a compass as symbols of a chaplain’s duty. Lee said the coin, signifying prayer on one side with the Navy logo on the other, would remind Holland of those who prayed for him today.

The compass, Lee said, represents the chaplain’s duty to guide and direct.

“The compass is to remind you that you need always to stay on course and that you will be that symbol for many when they are struggling in life,” Lee said. “They will come to you for guidance. You will be that moral compass for them.”

In his message, Lee noted that Acts 9:1 shows Saul the persecutor striking fear in the hearts of believers, but by verse 31 the church was enjoying “a time of peace.”

What made the difference, Lee noted, was Saul’s Damascus Road experience. Lee noted that Saul and Ananias were told the same thing — “Get up and go” — because each had been given a mission to fulfill.

Lee related the biblical account to the experience of military personnel by saying they often are called to unexpected places at undesirable times.

“Still, they must follow,” Lee said. Turning to address Holland, Lee added, “Josh, the time will come when you will find yourself at one of these junctures.”

What is true for military chaplains is true for every believer, Lee said, adding that believers go out “in the fear of the Lord with the comfort of the Holy Spirit.”

Lee offered encouragement to the seminarians on how to respond when God calls.

“Get down on your knees, ask for His strength, then get up and do your part,” Lee said. “It’s just that simple.”

By Will Hall, Baptist Message executive editor ALEXANDRIA, La. (LBM) – It’s a presidential election year, Louisiana has suffered another devastating natural disaster, and as Yogi Berra has said, “It's déjà vu all over again." In 2016, presidential candidate Donald Trump came to Louisiana just days after the … END_OF_DOCUMENT_TOKEN_TO_BE_REPLACED