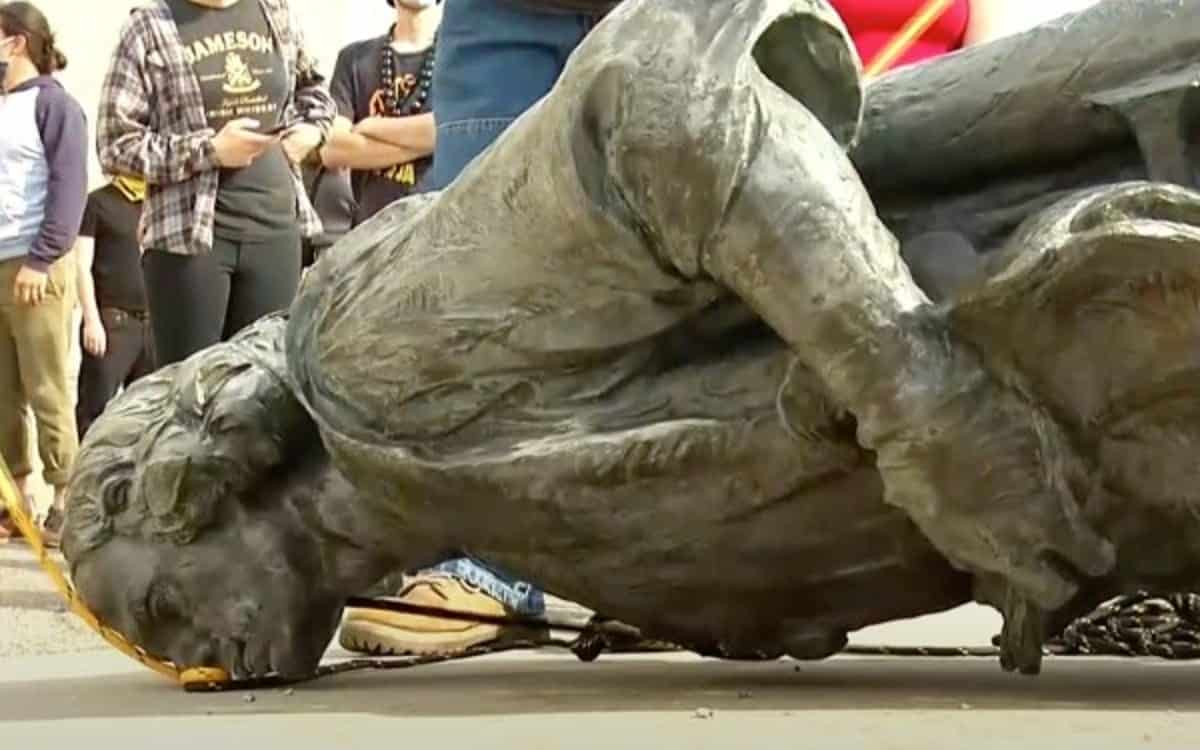 Protestors tore down a statue of Christopher Columbus, June 10, that had been donated to St. Paul, Minnesota, by Italian groups in 1931. Screengrab from KTSP TV.

WASHINGTON (LBM) – U.S. Senator James Lankford, a Southern Baptist who previously worked as director of the Falls Creek Youth Camp for Oklahoma Baptists before being elected to Congress, has proposed legislation that would eliminate Columbus Day and replace it with Juneteenth, in recognition of the end of slavery in this country.

Juneteenth dates back to June 19, 1865, when Texas recognized the Emancipation Proclamation issued by the United States in 1862, and that date was celebrated as “Emancipation Day.” Since then Juneteenth has been recognized by a growing number of states as a holiday.

Lankford submitted an amendment, along with Sen. Ron Johnson, R-Wis., to legislation being offered by Sen. John Cornyn, R-Texas.

Cornyn’s legislation simply would add Juneteenth as a national holiday.

Lankford, on the other hand, wants to end Columbus Day and replace it with Juneteenth, calling it “a second Independence Day,” referring to July 4.

He said making the swap instead of just adding another federal holiday would save businesses lost revenue and the federal government added costs of about $600 million in paid time off for federal employees.

Lankford did not address the impact on the Italian-American community with the elimination of Columbus Day.

The holiday was officially recognized, as a one-time event, in 1892, as an effort by President Benjamin Harrison to ease ethnic tensions that had erupted because of attacks on Italian Americans, particularly the lynching of 11 Italian immigrants in New Orleans a year earlier.

Moreover, Lankford did not comment on the movement already in motion to replace Columbus Day with Indigenous Peoples Day to recognize Native Americans. So far, there have been no public statements from American Indian groups about being slighted. But, Italian American groups have been combating this movement for several years in major cities with liberal mayors and councils such as Los Angeles and San Francisco in California and Austin, Texas.

When Lankford ran for Senate in 2014, The Oklahoman said he “lines up with conservatives on almost every issue but conveys an image of being practical and reasonable.”

Meanwhile, Russell Moore, president of the Ethics & Religious Liberty Commission of the Southern Baptist Convention, with whom Lankford has co-written at least one article, called Lankford “a champion of religious liberty and the rights of conscience.” Moore’s commendations accompanied the “Distinguished Service Award” the ERLC presented Lankford last year.

Lankford, likewise, is a Moore supporter, defending Moore in 2016 after a number of Southern Baptist churches withheld funding to the ERLC because of Moore’s attacks in liberal media outlets against evangelicals who voted for Trump.

By John Hebert, Louisiana Baptist missions and ministry team leader ALEXANDRIA, La. - “By faith Abraham, when he was called, obeyed by going out to a place which he was to receive for an inheritance; and he went out, not knowing where he was going.” (Hebrews 11:8) This verse describes the exercise of faith … END_OF_DOCUMENT_TOKEN_TO_BE_REPLACED