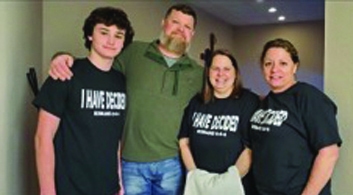 Pastor Brian Ray celebrated the baptism of three new converts who made decisions during the 12-day revival at First Baptist Church in Robeline. Submitted photo

ROBELINE, La. (LBM) –A flu outbreak in the Ashley Lewis family nearly prevented her from attending a recent revival service held at the First Baptist Church in Robeline, but a miraculous recovery within the household allowed her to experience the miracle of salvation during the final night, Jan. 31.

By the end of the 12-day revival, extended two days past its scheduled conclusion, 53 people, including Lewis, responded to the prompting of the Holy Spirit and committed their lives to Christ — with 44 of the new converts being baptized during the services.

“(Evangelist) Sam Moore was talking about how you’re either a heartbeat away from Heaven or Hell, and I could not leave that night without ensuring that I would never be separated from my Savior,” said Lewis. “It was a new beginning.”

Lewis waited to be baptized on Feb. 9 so family members could attend.

“Just the symbolism of likening baptism to resurrection to a new life made me feel close to Christ,” she added. “And knowing I had followed through in intentional obedience has made my faith stronger. I have a new hunger for God that I never knew I was missing.”

Brian Ray, pastor of First Baptist Robeline, said the Holy Spirit moved mightily during each of the revival services.

“This was a true movement of God,” Ray said. “We saw a lot of families, kids and others come down to the altar and cry out to God to be saved. My entire church, even those who previously made decisions, sought personal revival throughout the services and are anticipating how God is going to move in the days ahead.”

The church made preparations for the revival six months in advance, with each member praying for 10 lost people by name. Later, they were asked to invite these people to sit with them during the revival.

The congregation also faithfully prayed during Sunday and Wednesday services, asking for wisdom, discernment and revival, as well as to plead that God’s presence fill the worship center during each service.

“Revival starts with prayer and from there moves to the heart of each person,” Ray said. “The fruit is we get to see people saved. God definitely prepared the hearts and the church grounds for a revival that was so impactful for so many.”

Katie Jones was among those who responded to the Holy Spirit’s prompting to repent. She turned to Christ during the Jan. 30 revival meeting, and was baptized the following Sunday.

“On January 30, the first night that the revival was extended, my heart felt like it was going to pound out of my chest,” Jones said. “I knew then that I needed to get my salvation right with Christ. I prayed and asked Jesus to be my Lord and Savior. The peace that He gave me was so reassuring. I knew that if I took my last breath on earth that I would take my first breath in Heaven. Who doesn’t want that kind of peace?”

By Steve Horn ALEXANDRIA, (LBM)--You might be tired of hearing that we are living in unprecedented days, and, of listening to endless reports about the crisis, quarantine, social distancing, stay-at-home orders, and flattening the curve. I know I am. So, how about some good news? Our churches are … END_OF_DOCUMENT_TOKEN_TO_BE_REPLACED