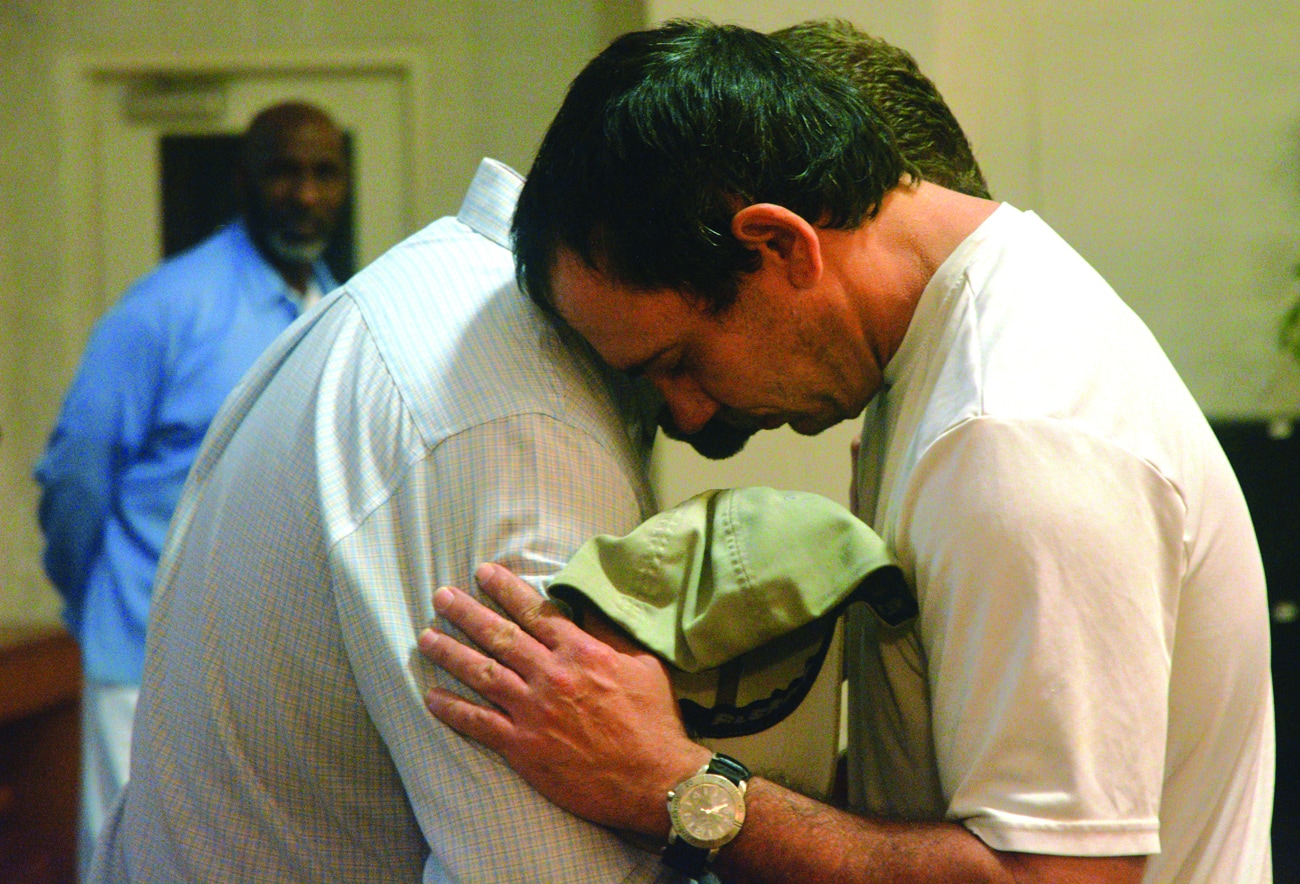 During the final moments of a revival at the Louisiana State Penitentiary at Angola, inmates came forward during a time of decision. One of the prisoners ask to pray with Jamie Dew, president of New Orleans Baptist Theological Seminary. Brian Blackwell photo

ANGOLA, La. (LBM)—Shoneray O’Haver has been serving a 75-year term at the Louisiana State Penitentiary since 2014. But on Sept. 19, at the prison known simply as Angola, formerly the bloodiest prison in America, the 36-year-old convicted armed robber gained a permanent reprieve from a spiritual death sentence by being set free in Christ.

“Asking Him to be my Savior and Lord is the best decision I have made,” an emotional O’Haver told the Baptist Message.

Seminary, led O’Haver in a prayer of repentance after sharing a message of hope based on 1 Corinthians 1:26-31.

Dew’s sermon at Angola was part of a one-day, multiple chapel, revival service organized by Keith Manuel, Louisiana Baptists’ director of evangelism, in part as a tribute to NOBTS as a follow-up event to the centennial anniversary the seminary celebrated last year.

The school and the prison enjoy a strong bond from a four-year NOBTS degree program – established in 1995 at the request of then-warden, Burl Cain, a Louisiana Baptist layman – which is credited with the dramatic reduction in murders as well as all violence, a nearly 85 percent drop, at Angola. Thirty congregations have been birthed across the prison, largely from the ongoing spiritual influence of NOBTS.

In September 2015, NOBTS dedicated a new 11,000-square-foot building at Angola that houses an extension center, built by the inmates and funded by donors. The Joan Horner Center has a computer lab, two classrooms, an auditorium and library, and is named in memory of benefactor Joan Horner, founder of Premier Designs of Dallas, Texas. She and husband Andy Horner were longtime supporters of the Angola ministry.

The Leavell College of NOBTS also has an active program at the Louisiana Correctional Institute for Women in St. Gabriel, as well as a presence in other states: the Mississippi State Penitentiary, Parchman, Miss.; Phillips State Prison, Buford, Ga.; and, the Hardee Correctional Institute, Bowling Green, Fla.

Meanwhile, Cain, who retired in 2016, is busy working to export the program to other states and even other countries.

“The blessing of ministry at Angola, or in any prison ministry setting, comes from knowing that even if a man spends the rest of his life behind the walls of prison, he can be restored, made whole, and set free on the inside,” Manuel said. “While a man may spend the rest of his days paying the penalty for a horrific act of sin, if he repents of his sin and receives Jesus as Savior and Lord, he is immediately redeemed, born again, and will one day, walk freely on the streets of gold.”

Dew encouraged the crowd in Tudy Chapel to cast aside worldly opinions about inmates at Angola, and instead to press on to share the Good News with other inmates as part of their mission field.

“I know what this world thinks of you,” Dew told the prisoners. “I know it has to hurt. I know it has to discourage you. You hear it. The media broadcasts it. People say callous things. The people say hurtful things, dreadful things.

“People ask questions like ‘Why do you want to go in there and help those people?’” he continued. “You have become in the eyes of the world ‘those people.’

Dew’s message resonated with other inmates like Letrakus Tyler.

“This unspeakable joy overcame me as he was sharing with us about how we matter and have a purpose for the Lord,” Tyler said. “I felt on this night that all of us were one with the Spirit and one with the Lord.”

“I see God in the midst of our mess,” Moran said. “To have someone like Dr. Dew come inside here and take the time to talk to us made me feel special. Despite our failures, he reminded us that we can have victory in Jesus.”

Rice, NOBTS dean of graduate studies, said he enjoyed worshipping side by side with inmates gathered in the Camp C Chapel and that he could see the inmates responding to his message about the unconditional love of God.

“I always enjoy my time in Angola,” Rice said. “I wish more believers could see what God is doing inside those walls.

“I always have people who act nervous and concerned for me when they hear that I’m going to the prison,” he also shared. “Honestly, I wish more of our churches outside the walls of Angola were like the churches you find on the inside. There’s no reason to show up and go through the motions at a church in prison. Those inmates who come are there just to draw closer to the Lord.”

Nix, NOBTS director of the Leavell Center for Evangelism and Church Health, said he was “thrilled to preach in the Ruth Graham Chapel built by Franklin Graham to honor his godly mother,” located at Camp F and that he took his lead from the “F” in the name to speak to the inmates.

He told them that “f” does not have to stand for failure, but that instead they should claim the letter to stand for “faithful men of God!” He also encouraged them that “’f’ can mean future, because the Lord said, ‘The plans I have for you are plans for your welfare and not for calamity, to give you a future and a hope,’” referencing Jeremiah 29:13.

He said the men, described to him by a chaplain as “mostly saved, but not always living like it,” welcomed his message, “The Great Commitment,” from Luke 9:23, which challenged them “to live for Jesus consistently.

“I was blessed to see men who were locked up in a prison but had found freedom in Christ even behind iron bars!” Nix exclaimed.

Roudkovski, director of the Doctor of Ministry Program for NOBTS, preached at the Camp D Chapel.

He said the simultaneous services were a reminder that anyone can change when they encounter Jesus.

“In my personal conversation with five out of six inmates, I found out they committed their crimes when they were 19 years old and sentenced to a life in prison,” he said. “I thought to myself that only because of the grace of God I didn’t do something atrocious when I was that age and stage in my life. I am grateful to Dr. Manuel and the LBC evangelism department for their willingness to facilitate the proclamation of the Gospel of Jesus Christ in Angola.”

Manuel’s son, Jeremy, served as a revival service coordinator, and was reunited with Calvin, an inmate the younger Manuel had met at an Angola worship service six years ago. He was overcome with emotion when he spied Calvin in the crowd.

“I had a feeling a few hours before the service that I was going to see Calvin again,” Manuel said. “It was one of those God things and this feeling of excitement came over me when I saw him again. Like Calvin, so many of the saved inmates are living ‘sold out’ to God. It’s awesome to see them pouring out their heart to the Lord.”

Scores of inmates raised their hands to Heaven during all four services. In all, about 300 prisoners and guests attended the simultaneous services, of which four inmates repented for salvation, four more repented to restore fellowship with Christ, and one accepted a call to serve in the Gospel ministry.

Meanwhile, as many as 4,000 of the 6,000 inmates already are professing Christians, one official noted, and 338 inmates have graduated from the seminary’s extension program, with some having transferred to other prisons as missionaries.

“The simultaneous services of the one-day revival were significant just because they cause the men to feel a great connection to the Christian community outside the prison,” Ricky Sharkey, chaplain supervisor for Angola and director of the Joan Horner Extension Center of NOBTS at Angola, told the Baptist Message. “The evangelistic harvest is a great bonus because it supports the ministry already here.”

By David Jeremiah EL CAJON, Calif. (BP) - Something strange happens to the psyche of a nation in difficult times. The downtrodden begin to resent government and wealthy corporations and individuals, seeing them as out of touch with, if not the cause of, their plight. Desperation can lead to a reversal of … END_OF_DOCUMENT_TOKEN_TO_BE_REPLACED