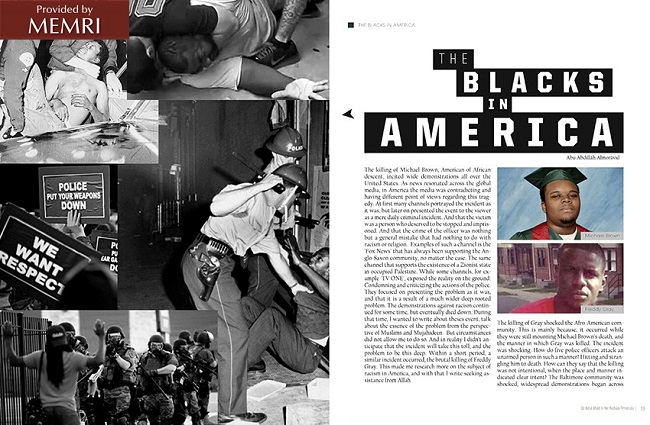 NEW YORK (Christian Examiner) – Al Qaeda’s newest edition of Inspire, a jihadist magazine aimed at recruiting terrorists from among the English-speaking world, encourages black Americans to rise up against their own government, the Middle East Media Research Institute has reported.

In the Inspire article titled, “The Blacks in America,” a writer calling himself Abu Abdiliah Al-Moravid claims the recent killings of blacks such as Michael Brown in Ferguson, Mo., Freddie Gray in Baltimore, Md., and nine black parishioners at Emanuel AME Church in Charleston, S.C., are unlike anything found in Islam.

Islam, Al-Moravid writes, “does not allow even the smallest kind of injustice, be it by words or having contempt for a particular race. We the Mujahedeen are a portion of the Muslim Ummah (nation), we do not accept any type of oppression against our Muslim brothers among the Afro-Americans, or even the non-Muslims. And the opposite of oppression is Justice, and this was we have been commanded by our religion.”

Al-Moravid also claims the American media is helping white power structures in the country conceal the truth of what happened to Brown, Gray and others. In particular, he targets FOX News, the tool of the “Anglo-Saxon community” and an example of white arrogance.

To read more on this story, visit the Christian Examiner website here.