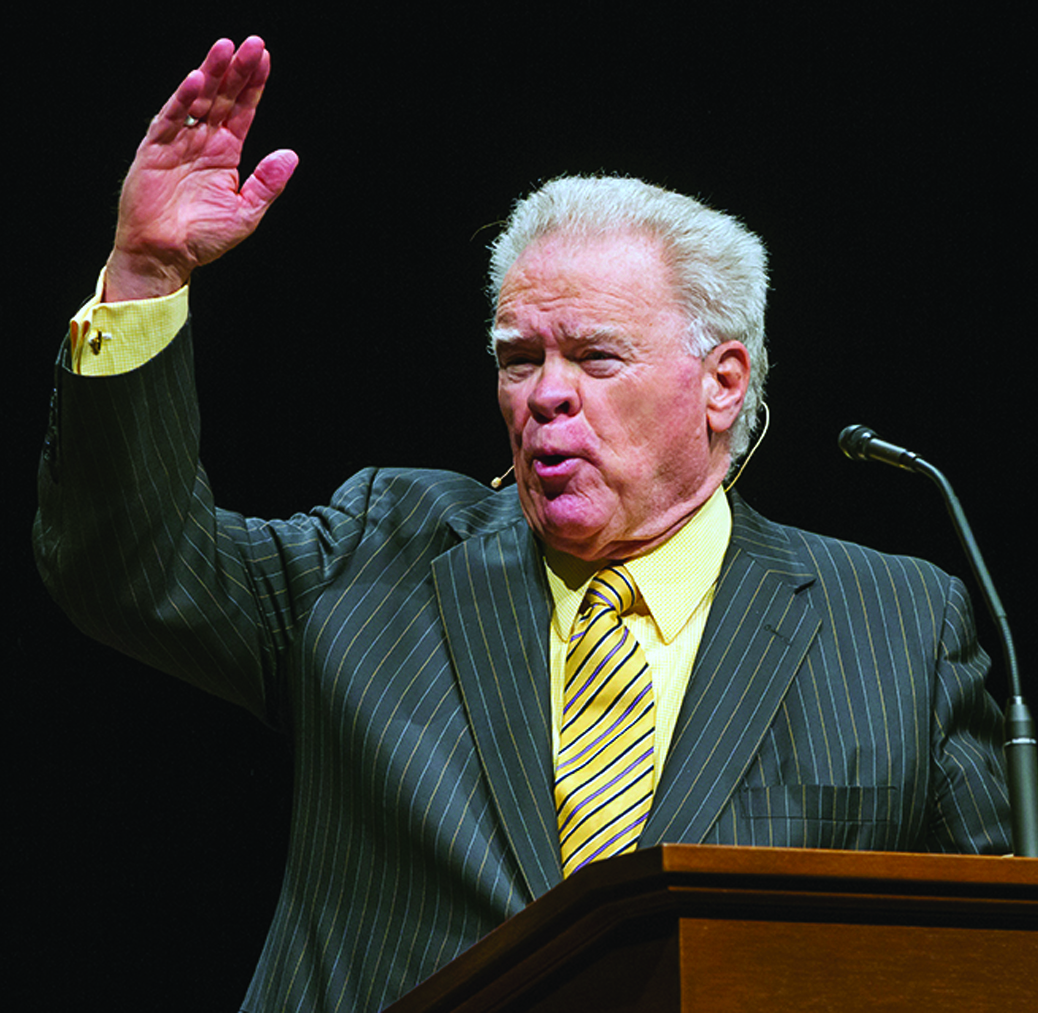 By Joni B. Hannigan, Special to the Message

FORT WORTH, Texas – In an unusual show of defiance a few students at Southwestern Baptist Theological Seminary stood and then walked out during the chapel service Nov. 29 in apparent disagreement with the speaker.

Seminary President Paige Patterson said later he believes the four Calvinist students who sit together most likely acted in a “spontaneous” manner and although the student code of conduct generally frowns on such behavior, this was not the norm.

“If it were to happen again, I would deal with it in no uncertain terms,” Patterson said in response to questions. “They are free to think what they want, but they are not free to be rude or to disturb chapel. They know me well enough not to push this issue.”

The students were reacting to a message by Rick Patrick, pastor of First Baptist Church in Sylacauga, Alabama, and a 1993 graduate of Southwestern Seminary.

Patterson, in a separate Dec. 2 blog on the seminary website, also defended Patrick as delivering his message “as would be expected at a Southern Baptist seminary in view of the current discussions in our denomination.”

Further, he clarified remarks he made after Patrick’s message the students’ protest.

“[L]et it be clear that I asked no one to leave the SBC!” Patterson wrote.

“If my only difference with Presbyterians were that I favored only baptism of adult believers rather than the baptism of infants, I would probably be conflicted, but I might affiliate with Primitive Baptists,” he added.

“I asked no one else to respond this way,” Patterson wrote. “I expressed what I would do, just as every Baptist is free to do, and, especially, as is our custom in the academic world.”

Patrick’s 38-minute message focused on the primacy of salvation in Christ.

In the first part of his sermon, Patrick noted he came to Christ after hearing the plan of salvation and praying “The Sinner’s Prayer.”

Patrick said it was disconcerting when 30 years later that prayer was being blamed for sending people to Hell.

“The blame lies not with the form of expression, but rather with the lack of sincerity in the heart of the false professor,” Patrick said.

He also urged the chapel crowd not to neglect the study of salvation, offering his view that traditionalists (non-Calvinists) and Calvinists see things differently when it comes to “matters of ministry and theology.”

Declaring Baptists share a basic sense of orthodoxy concerning the Virgin Birth, the Trinity and the Scriptures, Patrick said the road diverges after that and Calvinists and traditionalists split ways.

Patrick said he and some other like-minded pastors had taken notice of the growth of Calvinism in the Southern Baptist Convention, including ministry organizations, sponsored conferences, and even book giveaways promoting Calvinistic views on church history, church governance, church planting and cultural engagement.

In all, they identified six different Calvinist organizations that had emerged in Southern Baptist life.

With that discovery, Patrick said he and these other pastors decided there should be at least one that represents the (Herschel)Hobbs/(Adrian) Rogers non-Calvinistic doctrinal position, “a basic view of salvation” embraced by the early writers of the Baptist Faith & Message.

Hence the group formed Connect 316, an organization he said is not part of the new Calvinistic movement, but, “rather, we are an organized, respectful response to that movement.”

How one views salvation also influences what a person thinks about other spiritual issues, he said.

Patrick said a believer’s soteriological view shapes his or her view on the “Sinner’s Prayer,” “evangelists,” “altar calls,” and “mode of baptism.”

He said it even influences what one believes about “God and country” and the use of “alcohol and tobacco.”

Patrick shared how a growing number of Southern Baptists are expressing concerns about individuals and groups in the SBC who “increasingly embrace the Presbyterian view of salvation doctrine, church government, the mode of baptism, avoidance of the altar call, the use of beverage alcohol, the approval of societal missions funding and so on.”

These practices are broader than the issue of salvation, Patrick conceded, but he insisted each is driven by a person’s basic belief about what salvation means.

“If we are not careful a myriad of related beliefs and practices will enter our camp, hidden within the Trojan Horse of Calvinism,” Patrick asserted.

Barry McCarty, a professor of preaching and rhetoric at Southwestern Seminary said he did not view the student protest as a “huge incident” in chapel that day, nor did he find Patrick’s message polarizing.

In fact, McCarty defended Patrick for presenting a viewpoint he said he also holds and he believes is one held by a majority of Southern Baptists.

“I can say that Rick was plain spoken and I didn’t think he was at all ugly toward anyone who is a Calvinist. I think he was just trying to find a parity,” McCarty said.

McCarty, chief parliamentarian at the Southern Baptist Convention annual meeting for 31 years, said there are two things that hold Southern Baptists together – the Cooperative Program and The Baptist Faith and Message.

“I don’t want to see people lining up in partisan camps,” he said of Calvinism and more traditional views.

However, McCarty said he heartily rejects infant baptism, adding that it is the one Presbyterian practice that would not fit under the Southern Baptist tent, no matter the desire to be inclusive toward Calvinists.

“I have got to question if a Southern Baptist church is embracing paedobaptism,” McCarty said. If they do, “I think they have given away a fundamental important Baptist distinctive.”

Patterson ended his statement with a focus on baptism as well, in context of salvation, and in a larger sense, evangelism.

He said the whole Conservative Resurgence, which was a fight about Southern Baptists’ beliefs, “was really always about one thing—reaching men and women for Christ.”

Patterson wrote. “My unalterable fear for our denomination today is that baptisms will continue to plummet, giving a certain indication of loss of evangelistic concern and fervency.

“Southern Baptists prospered by being the most effectively evangelistic among all denominations, and we will only prosper again if we honor God in that way,” Patterson continued.

Joni B. Hannigan is a newswriter living in Jacksonville, Fla.

By Rebecca Holloway PINEVILLE, La. – For years, I have read and heard the statement, “We need to hold life/our family/our possessions with an open hand.” The idea is that we are not in control of our lives or anything else on this planet. God is in complete control of all things and has the power and right to … END_OF_DOCUMENT_TOKEN_TO_BE_REPLACED