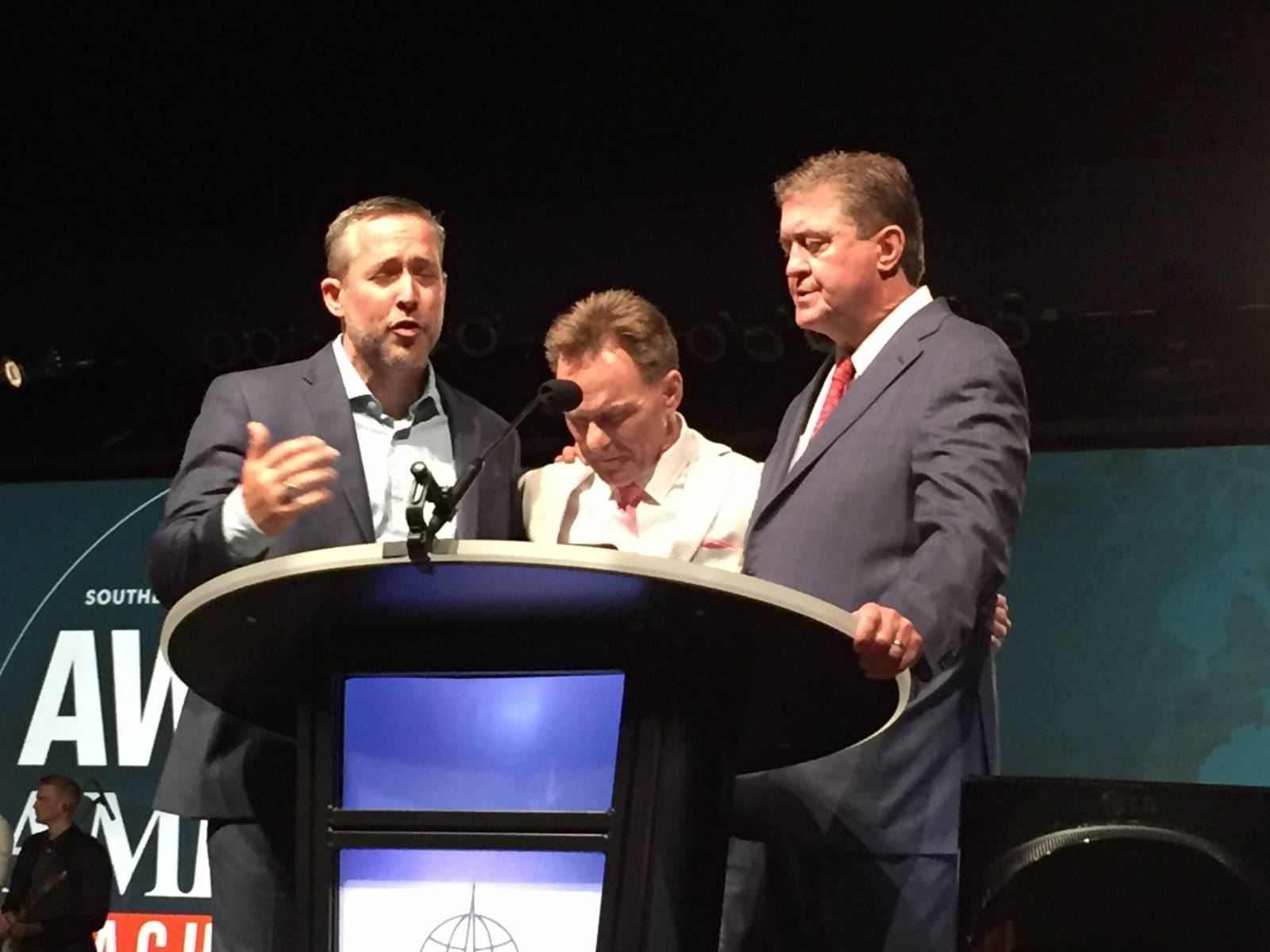 ST LOUIS (BP) — In an effort to help bring unity following a close vote, North Carolina pastor J.D. Greear announced Wednesday he withdrew from the race for president of the Southern Baptist Convention during the SBC’s annual meeting in St. Louis.

SBC President Ronnie Floyd recognized Greear and Tennessee pastor Steve Gaines so they could address the convention at the start what was to be a third vote for president at the end of the June 15 morning session.

However, before any ballots could be cast Greear announced to the convention that he was withdrawing his name from consideration after he prayed last night and believes “we need to leave St. Louis united.

“I’ve said from the beginning it is tricky to lead the SBC,” Greear said. “I’ve spent a good amount of time praying and I believe for the sake of our convention and our election we need to leave St. Louis united. … We are united by a Gospel too great, and a mission too urgent, to let a lesser message stand in our way.

“I am respectfully withdrawing my candidacy as president and asking you to join me in electing Steve Gaines as president,” Greear said, adding that Gaines had considered “doing the exact same thing in reverse.”

Gaines said “there’s no way God is not doing something in all of this.”

Gaines said he had decided internally Tuesday night to withdraw during the National Call to Prayer for Spiritual Leadership, Revived Churches and Nationwide and Global Awakening but agreed to serve as president after the two men met Tuesday evening and prayed together.

“I just wanted Jesus to be lifted high” and the convention to be united, Gaines said.

Greear said those who voted for him should not complain but serve. “It is time for us to step up and get involved,” joining “those who have gone before us” in the convention’s work, he said. “We stand together because God saved us. We want to see Him save others.”

Greear’s decision avoided a second runoff and allowed Gaines to be elected as president of the SBC by acclamation which registration secretary Jim Wells did.

Following the announcement of the vote, Floyd, who told the messengers he felt God was orchestrating something like this Tuesday evening, asked Greear to pray for Gaines and then he lifted both men up in prayer for “being great men of God.”

Following the runoff, SBC President Ronnie Floyd reported results of the election at the beginning of the Tuesday night session. Of the 7,230 messengers registered at the time of the first runoff, 4,824 ballots were cast. To be declared a winner, Gaines or Greear needed to win 50 percent plus 1 of ballots cast, or 2,413 or more votes.

Gaines received 2,410 votes or 49.96 percent while Greear received 2,306 votes or 47.80 percent. However, 108 votes were considered illegal because the wrong ballot was used or an indistinguishable mark was made. Roberts Rules of Order require that the 108 illegal votes be counted to determine a majority, Floyd said. “The rules are clear.”

A second run-off election between the two pastors had been scheduled for the Wednesday morning session.

Former SBC president Johnny Hunt said in announcing Gaines’ nomination March 9, “When Steve Gaines shared his prayer journey he and [his wife] Donna had travelled, I was touched by his clear call to allow himself to be nominated. Steve struggled with this nomination as he has always believed this office should seek the man. With such a passionate desire for spiritual revival in our churches and nation, and knowing him to be a man of deep intense prayer, it brings joy to my heart to nominate Dr. Gaines.”

During the 11 years Gaines has pastored Memphis-area Bellevue Baptist Church in Cordova, Tenn., the congregation has averaged 481 baptisms per year, according to the SBC’s Annual Church Profile database. Previously, he pastored churches in Alabama, Tennessee and Texas.

Bellevue voted to give $1 million during its 2016-17 church year through the Cooperative Program, Southern Baptists’ unified channel for funding state- and SBC-level missions and ministries. That will total approximately 4.6 percent of undesignated receipts, the church told Baptist Press.

By Don F. Mabry ALEXANDRIA, La. (LBM)-- The number of churches in our country constantly is changing and it is very difficult to acquire information from the various denominations, but estimates indicate that there are 330,000 Christian churches and congregations in the United States today. But the question … END_OF_DOCUMENT_TOKEN_TO_BE_REPLACED