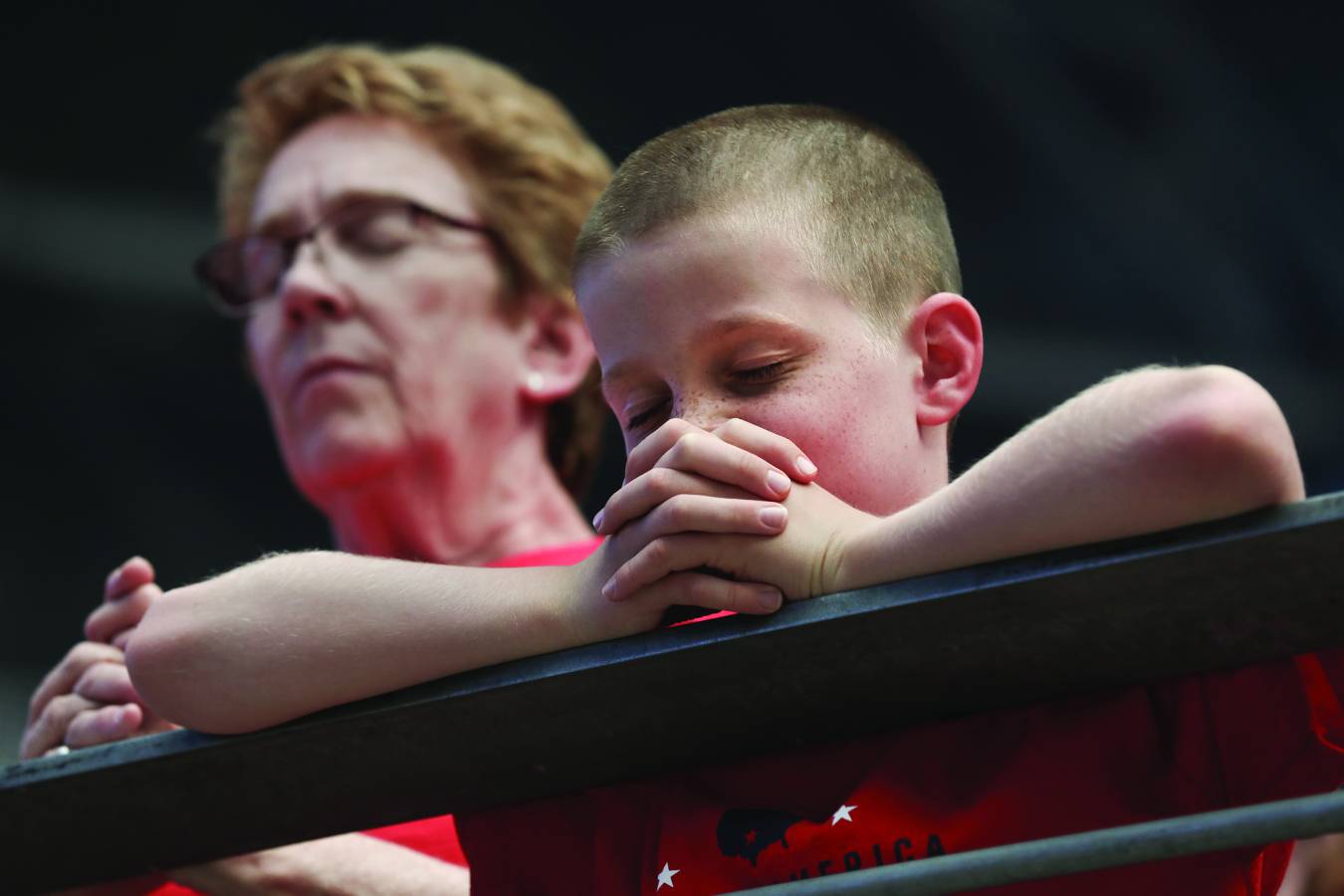 Diane Sobol and her grandson, Killian, of Calvary Community Church in Phoenix, pray at Harvest America June 11 at the University of Phoenix Stadium in Glendale, Ariz. More than 38,000 attended and there were 3,398 salvation decisions.

PHOENIX—Because of hearing the Gospel during a crusade service held June 11 in conjunction with the Southern Baptist Convention’s 2017 Annual Meeting, 2,904 persons made salvation decisions at the live event, and another 494 declared Christ as Lord while watching the service online.

A crowd of about 38,000 individuals gathered in the University of Phoenix Stadium in Glendale, Arizona, while an unknown number of persons assembled at 3,000 host sites to watch via the internet. 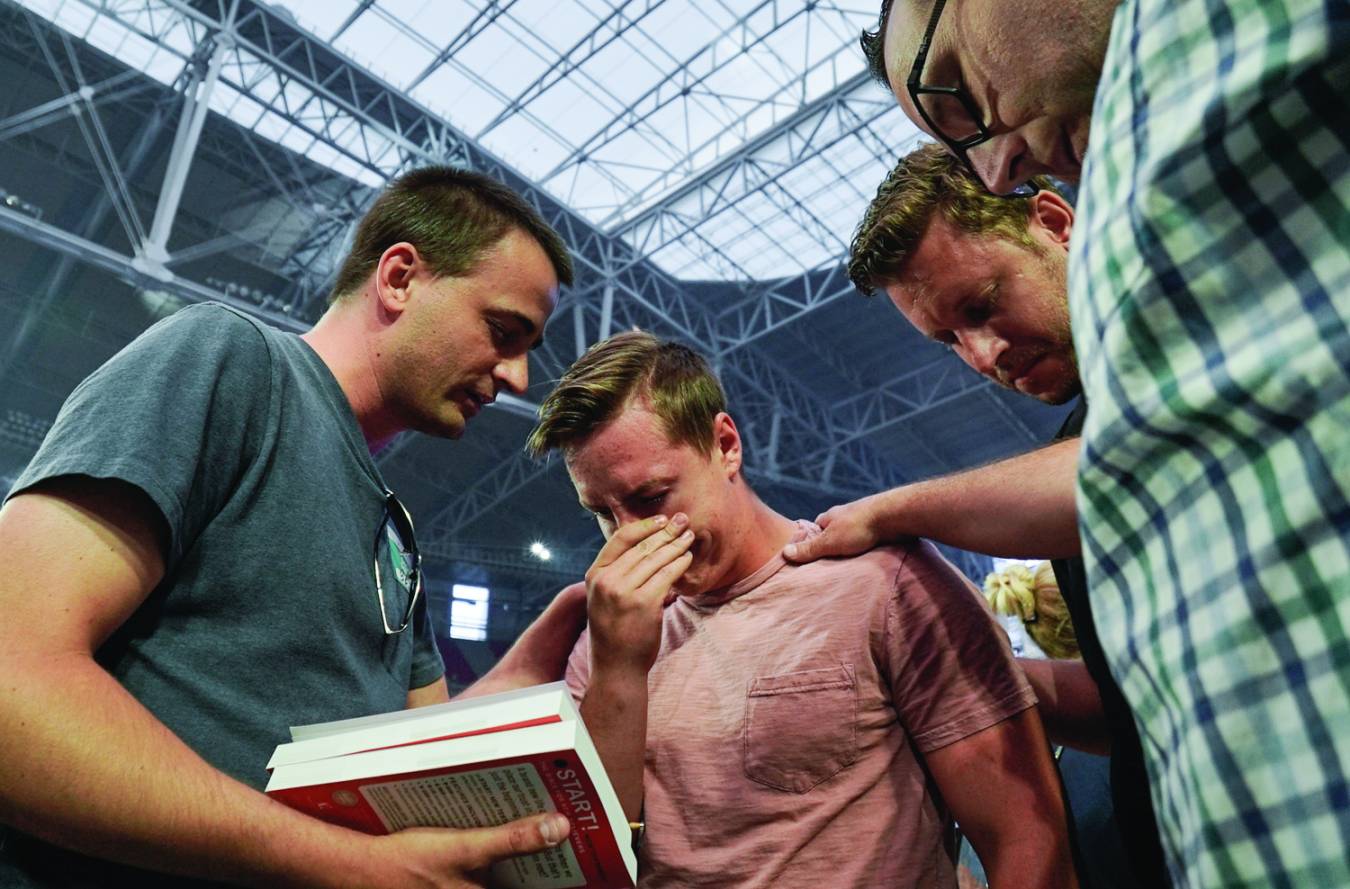 Diane Sobol and her grandson, Killian, of Calvary Community Church in Phoenix, pray at Harvest America June 11 at the University of Phoenix Stadium in Glendale, Ariz. More than 38,000 attended and there were 3,398 salvation decisions.

Although a multi-denominational endeavor, the crusade largely was a cooperative effort between Harvest America and Southern Baptists’ North American Mission Board, which scheduled the mass evangelistic appeal as the final event for Crossover, the annual outreach program conducted before the SBC annual meeting, held June 13-14 in Phoenix, Arizona.

The evening service started with prayer for the nation and included worship by music performed by NEEDTOBREATHE, Trip Lee, MercyMe, Jordin Sparks, Phil Wickham and Brennley Brown. But the emphasis for the evening was a Gospel message from Greg Laurie.

Laurie is pastor of Harvest Christian Fellowship, which has campuses in California and Hawaii. He also is the founder and featured speaker of Harvest Crusades and Harvest American large-scale public evangelistic events. 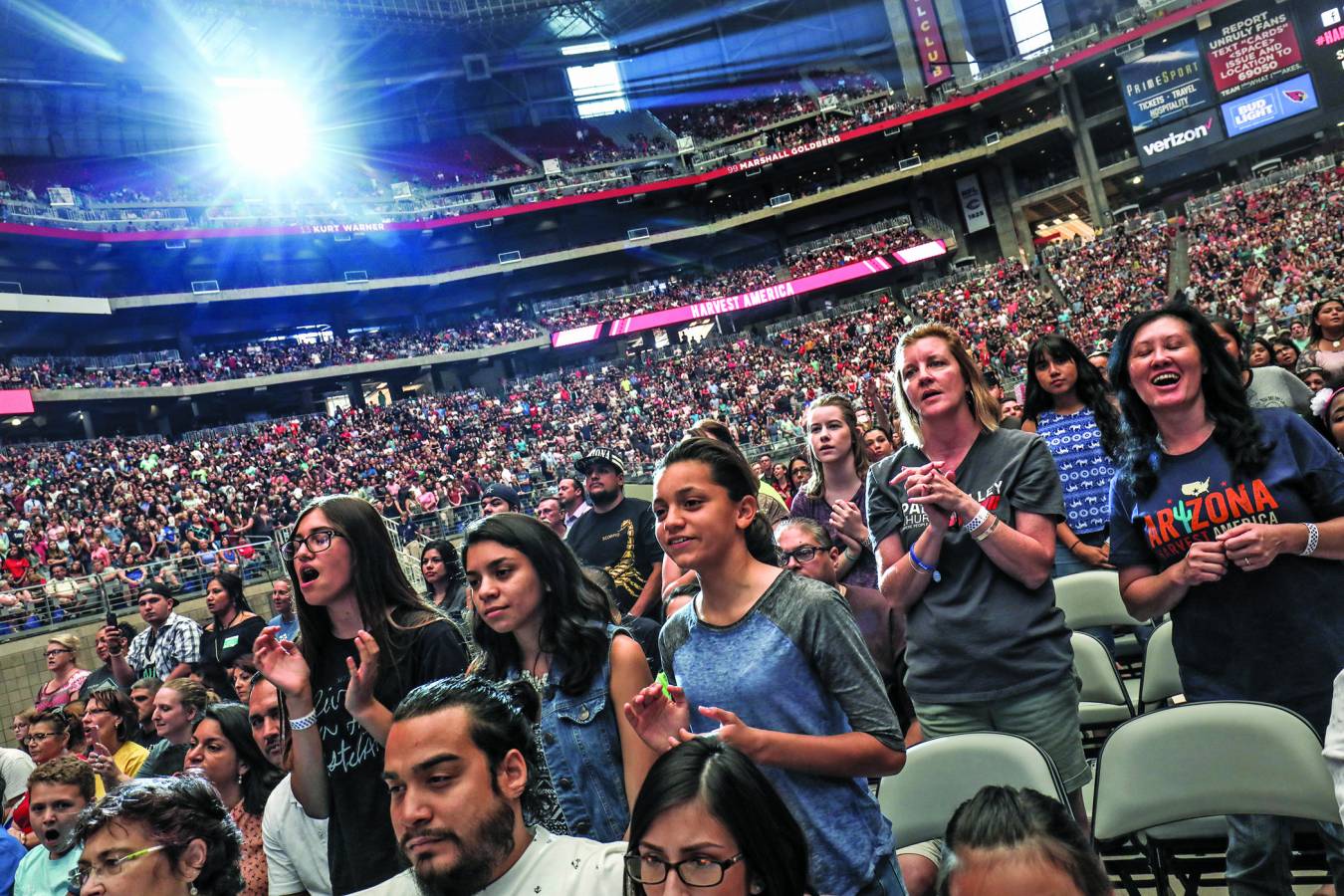 THE MESSAGE OF THE CROSS

In his message, Laurie shared about the anxieties and fears most Americans face. In Arizona, the number of suicides is significantly higher than homicides, resulting in 810 deaths annually, he said.

“We’re living in a crazy world right now,” Laurie said. “Our nation is lost in every state including Arizona. The threat of terrorism is real.

“People are scared, worried, in anxiety. But let’s have theology without apology. People are hungry for that; they’re hungry to have an honest and hopeful conversation. The last thing that God wants is any man or woman created in His own image to go to Hell. Heaven is His place for all forgiven people and all people can be forgiven at any time if they believe and receive Him into their lives. That’s the message we aimed to share during Crossover Arizona and at Harvest America — a message of hope to the nation.”

Laurie ended the evening by inviting people to the stadium floor if they wanted to begin a relationship with Christ.

NAMB is planning a similar partnership next year as the Southern Baptist Convention meets in Dallas.

Based on reporting by Josie Bingham for Baptist Press.

By Joe McKeever “‘…your ways are not my ways,’ saith the Lord.”  (Isaiah 55:8) Keep an eye on how the Lord works in your life. You might learn something useful for the next time He wants to use you. This little couplet seems to sum up 90 percent of what Scripture and life teach us concerning the operation … END_OF_DOCUMENT_TOKEN_TO_BE_REPLACED