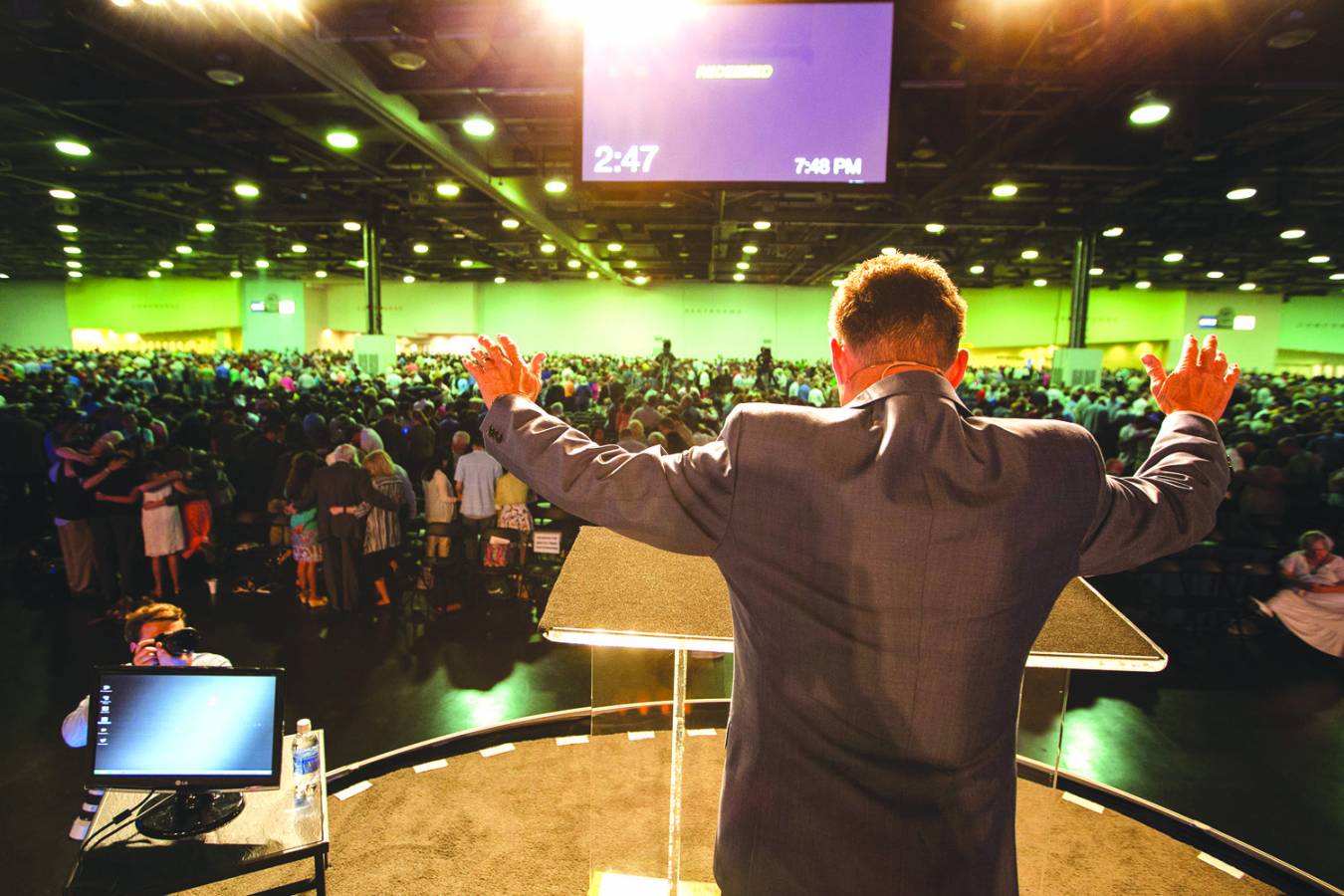 Ronnie Floyd, president of the Southern Baptist Convention, leads small groups of messengers at the SBC annual meeting June 16 to “repent of all racism and all prejudice.” Floyd called on all Southern Baptists to pray for the next Great Awakening during the evening session at the Greater Columbus Convention Center in Columbus, Ohio.

COLUMBUS, Ohio (BP) – Spiritual awakening, the defense of marriage and the preservation of religious liberty were among key themes addressed by messengers at the Southern Baptist Convention annual meeting June 16-17 in Columbus, Ohio.

The meeting was highlighted by a Tuesday night prayer gathering led by SBC President Ronnie Floyd, at which an estimated 7,000 Southern Baptists spent two hours asking God for a third Great Awakening in America and the global advance of the Gospel. The gathering was watched by an additional 8,000 people online and broadcast on Daystar television.

The 5,407 registered messengers – up from 5,294 in Baltimore last year – also took several actions to advance racial and ethnic diversity within the SBC and celebrated nearly 60 missionaries during the first-ever joint missions service of the International and North American Mission Boards. Floyd, who was reelected to a second term as SBC president, called in his presidential address for Southern Baptists to provide spiritual and moral leadership amid a time of crisis in the world that also is “our most defining hour as Southern Baptists.“

Building on Floyd’s address, the June 16 prayer time featured intercession led by 11 pastors and was punctuated by hundreds, if not thousands, of believers kneeling and prostrated at the Greater Columbus Convention Center. Dozens more from a broad array of racial and ethnic groups voiced prayers from the platform.

A resolution on “revival and spiritual awakening“ said Southern Baptists “faithfully and fervently plead with our great God to open the windows of heaven and come down among His people with a fresh filling of His Spirit.“

With a U.S. Supreme Court decision on gay marriage expected in late June, Floyd and the living SBC presidents elected since 1980 issued a joint statement that pledged love for individuals with same-sex attraction yet stated, “We will not accept, nor adhere to, any legal redefinition of marriage issued by any political or judicial body including the United States Supreme Court.“ Floyd drew national headlines when he said in his presidential address that he will not perform gay weddings.

A resolution on the “public witness on marriage“ called the Supreme Court to “uphold the right of the citizens to define marriage as exclusively the union of one man and one woman.“ Southern Baptists will not waver in their defense of traditional marriage regardless of how the court rules, the resolution said.

To help combat global religious persecution, the ERLC announced the opening of an international religious freedom office in the Mideast and appointed Travis Wussow of Austin, Texas, as director of international justice and religious liberty.

Barronelle Stutzman, a Washington state florist held liable by her state’s government for refusing to provide flowers for a same-sex wedding, received a standing ovation when she was introduced during the ERLC report. Naghmeh Abedini, wife of a U.S. pastor imprisoned in Iran for his Christian faith, briefly addressed the SBC Pastors’ Conference June 15 and spoke at the Pastors’ Wives Conference. Floyd asked God specifically for Saeed Abedini’s release during the convention’s evening of prayer.

Two resolutions spotlighted religious persecution, with one pledging prayer for “the persecuted church worldwide“ and the other specifically denouncing religious persecution and human rights violations in North Korea. The marriage resolution said “the religious liberty of individual citizens or institutions should not be infringed as a result of believing or living according to the biblical definition of marriage.“

Messengers received a report from the SBC Executive Committee reviewing the convention’s progress on racial reconciliation between 1995-2015. A motion from the floor to commend the EC for its work was adopted, and a resolution pledged messengers’ rededication to the work of racial reconciliation.

The Committee on Nominations elected for the coming year is the most diverse in the SBC’s history, with 27 percent of members coming from ethnic and minority groups, reported Bryan Smith, chair of the Committee on Committees.

At the joint NAMB-IMB Church and Mission Sending Celebration, messengers were introduced to dozens of North American and international missionaries in a video presentation, then gathered around them to pray and offered an ovation of support. 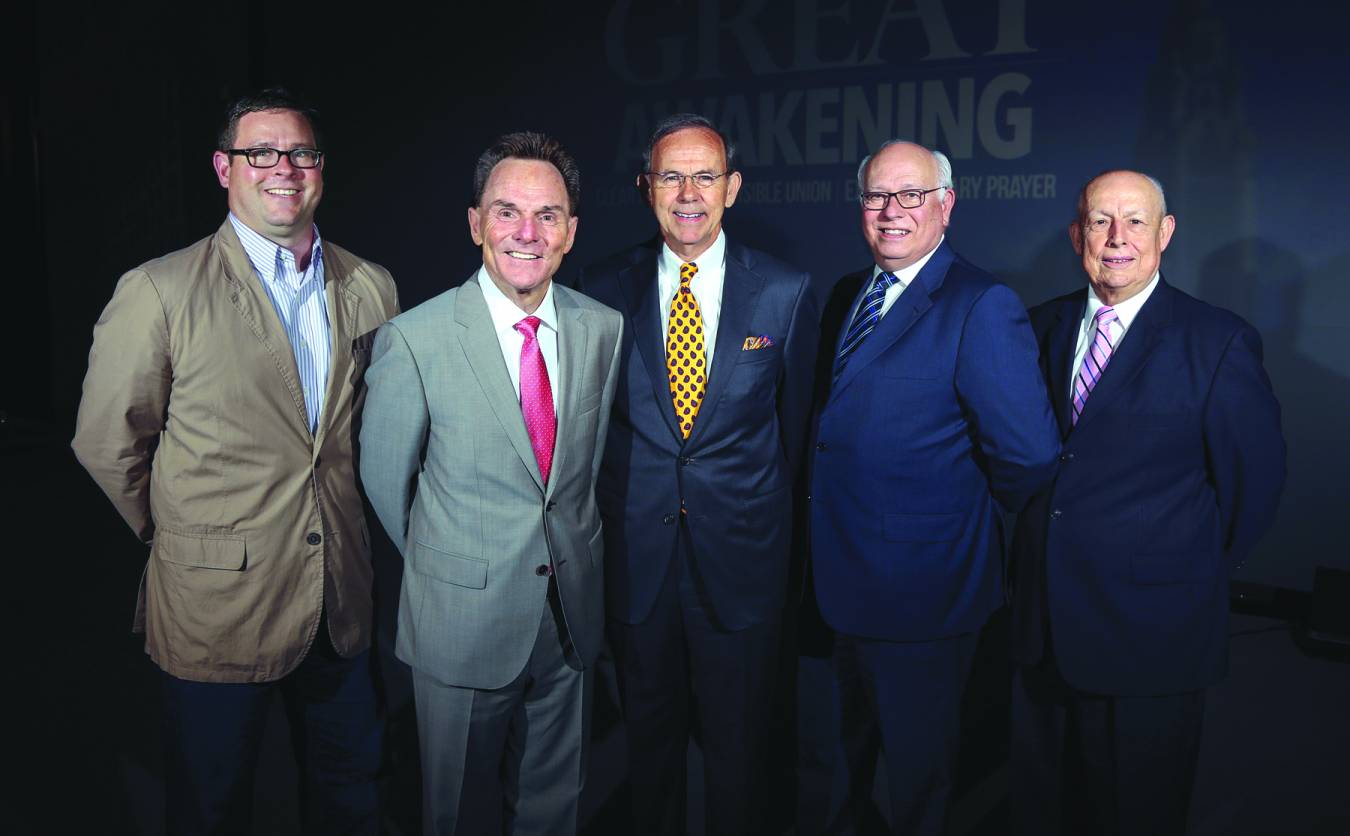 IMB President David Platt denied reports that a new personnel policy lowers standards for missionaries. The policy seeks to align the IMB’s requirements with the Baptist Faith and Message and does not signal a shift in practice related to speaking in tongues or divorce among other missionary qualifications, Platt said. Messengers did not ask Platt any questions despite media reports that some planned to voice concerns about the revised personnel policy.

NAMB President Kevin Ezell reported 985 church starts in 2014, a 5 percent increase from the previous year. Some 58 percent of last year’s church plants were non-Anglo, he said.

WMU elected Linda Cooper of Bowling Green, Ky., as president during the missions auxiliary’s Missions Celebration and Annual Meeting, June 14-15. Cooper, a member of Forest Park Baptist Church, will replace Debby Akerman, who has served as president for five years.

Messengers amended an EC recommendation that would have allowed the messengers present at any session of an SBC annual meeting to constitute a quorum. As amended, the EC recommendation maintains the current SBC Bylaw 35 definition of a quorum as “a minimum of 25 percent of those duly registered and seated messengers.“

An EC recommendation was approved to change the name of Golden Gate Baptist Theological Seminary to Gateway Seminary of the Southern Baptist Convention. During the first-ever joint report of the six SBC seminaries, Golden Gate reported that the relocation of its primary campus to Southern California should be complete by the summer of 2016.

Messengers approved an EC recommendation to amend NAMB’s ministry assignment, enabling the convention’s entity charged with facilitating North American missions to “provide specialized, defined and agreed upon assistance to the International Mission Board in assisting churches to plant churches for specific groups outside the United States and Canada.”

EC leaders said in February that the possibility of military chaplains facing religious liberty constraints in their ministry to troops overseas was a key factor in the recommendation.

By Chuck Kelley Rarely does Hollywood contact a Southern Baptist seminary, but rarely is not never. One day location scouts for a major motion picture to be filmed in New Orleans called NOBTS and asked to tour the campus. They were looking for a place that with a bit of movie magic could be made to look like the … END_OF_DOCUMENT_TOKEN_TO_BE_REPLACED