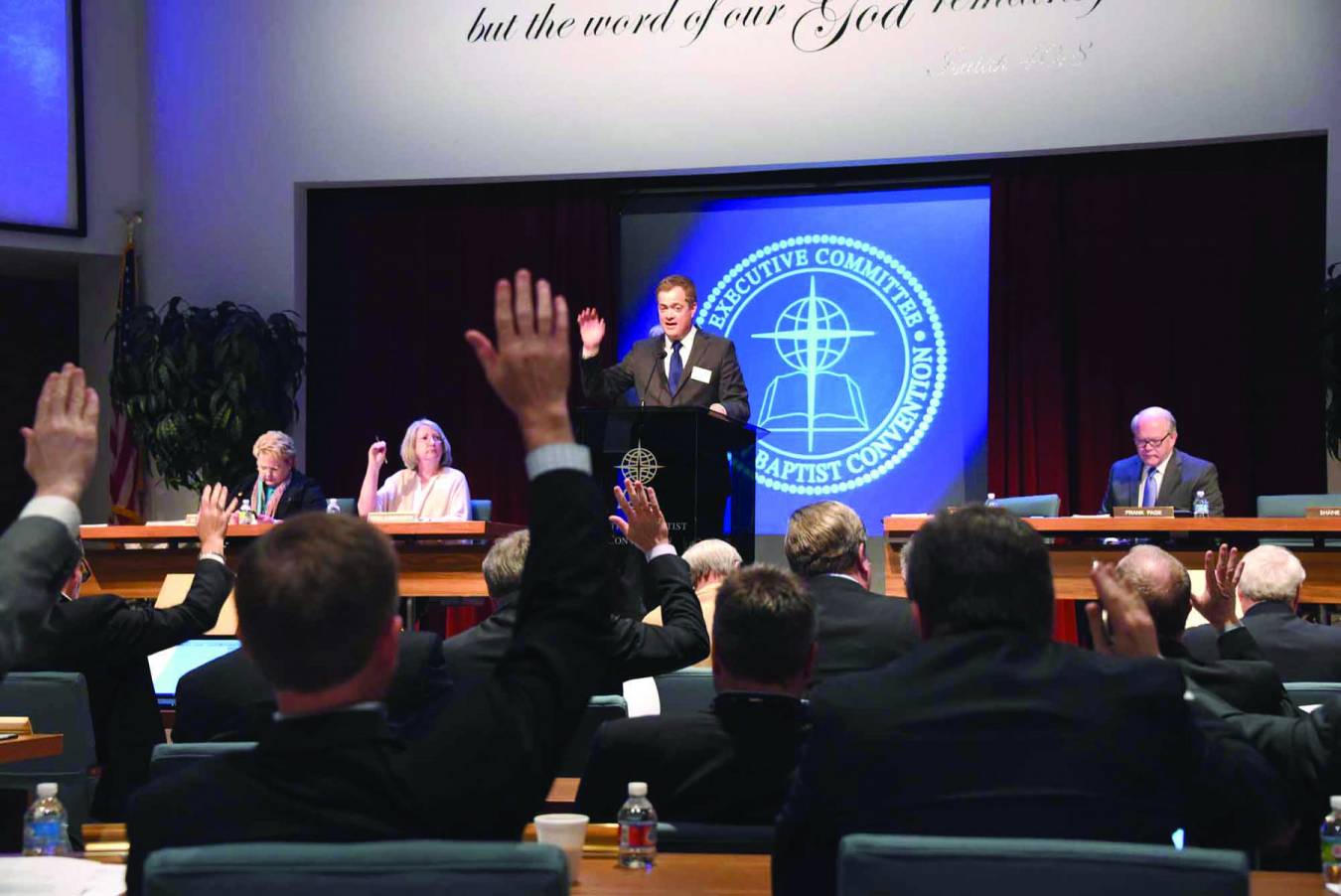 NASHVILLE, Tenn. (LBM)—Members of the Southern Baptist Convention Executive Committee took the initiative during a committee session and again during a plenary session to ask for official action about national entities that are causing churches to withhold support for national causes.

In the end two panels were proposed to study SBC entities whose leaders appear to be out of step with the consensus of SBC churches.

The national effort to address troubling activities by SBC entities follows by almost three months a related action taken by messengers to the annual meeting of the Louisiana Baptist Convention.

Moreover, it is an acknowledgement by SBC leaders that Southern Baptists across the country are not happy with some aspects of the direction of the national Convention.

The actions were taken about a week after Prestonwood Baptist Church announced Feb. 16 it was escrowing $1 million in Cooperative Program funds for what Pastor Jack Graham described as concerns about the direction of the SBC.

Graham spoke to the Baptist Message via phone then and said church leaders had expressed to him “uneasiness” about the “disconnect between some of our denominational leaders and our churches.”

Graham is a former president of the Southern Baptist Convention.

The 41,000-member congregation acted about three weeks after a former president of the Tennessee Baptist Convention resigned as a trustee of the International Mission Board.

Dean Haun, pastor of the First Baptist Church in Morristown, Tennessee, told the Baptist and Reflector, the newsjournal of Tennessee Baptists, he took this stand primarily in response to the IMB’s signing of a legal brief which supports the building of a Muslim mosque in New Jersey.

The Jan. 23 article reported the church supported their pastor’s decision by escrowing its Cooperative Program contributions to national causes — while still distributing gifts to state missions and ministries. This congregation is described as the fifth largest contributor of gifts through the Cooperative Program from Tennessee.

The IMB responded by announcing Jan. 27 it has “revised our processes” so that President David Platt and General Counsel Derek Gaubatz will now consult trustees before filing future amicus briefs on behalf of the entity.

The SBC’s Ethics and Religious Liberty Commission also signed onto the mosque brief, which was cited by the presiding federal judge, appointed by former President Obama, as influencing him to rule in favor of allowing the mosque to be built.

Likewise, its president, Russell Moore, has received a wave of backlash for multiple sweeping harsh insults he made about Christian leaders and other evangelicals who held political views that differed from his during the 2016 U.S. presidential campaign.

Moore used social media posts and opinion pieces he penned for The Washington Post and The New York Times, both liberal news outlets, to attack evangelicals who voted for then-candidate Donald Trump, calling them at various times “drunk,” “doctrinally vacuous,” and the “Jimmy Swaggart wing” of evangelicals.

He also complained the word “evangelical” no longer had meaning and asked he not be called one.

Haun mentioned ERLC’s signing of the amicus brief as a concern which was considered in his congregation’s decision to withhold money to SBC causes.

Meanwhile, Mike Buster, executive pastor for Prestonwood, provided a statement to the Baptist Message explaining how “various significant positions taken by the leadership of the Ethics and Religious Liberty Commission that do not reflect the beliefs and values of many in the Southern Baptist Convention” were a factor in his church’s actions.

Furthermore, Baptist Press, Southern Baptists’ official news service, reported in its coverage of the SBC Executive Committee’s proceedings that “other churches have taken or are considering similar action over concerns related to multiple SBC entities.”

The growing movement to defund national causes spurred members of the Cooperative Program Committee, a subgroup of the SBC Executive Committee, to call for a panel to be formed to respond to churches’ concerns.

Committee and workgroup sessions are “open” to the press, but the SBC Executive Committee does not allow “direct quotation of any matter” nor any “implied or direct attribution to any person” during either because these are developmental sessions and not final actions of the entity.

Rolland Slade, pastor of Meridian Southern Baptist Church in El Cajon, California, said the “concern of the committee is anything that’s negatively impacting the Cooperative Program” and this led to multiple members asking that a panel from among them be formed to look into these matters.

According to Baptist Press, Slade said a team will be appointed to look into the situation “by Feb. 25” as the result of a unanimously adopted motion following an extended discussion, and he promised a report will be presented to the full SBC Executive Committee during its September 2017 meeting.

Concerns also were raised by others during a Feb. 21 general session of the entire SBC Executive Committee.

Tony Crisp, who serves on the Administrative Committee and is pastor of Eastanallee Baptist Church in Riceville, Tennessee, requested the officers of the SBC Executive Committee form another panel to “monitor the activities of our various Southern Baptist entities since our last convention … in relation to how those activities might adversely affect” giving through the Cooperative Program.

Baptist Press reported that he requested this group provide its findings to the whole body of the SBC Executive Committee during the entity’s June 12 meeting in Phoenix just prior to the annual meeting of the Southern Baptist Convention.

Stephen Rummage, chairman of the SBC Executive Committee and pastor of Bell Shoals Baptist Church in Brandon, Florida, said Crisp’s request was “certainly within the purview and responsibilities of our officers … so we are glad to comply with that request,” according to Baptist Press.

He said the two efforts – by the officers of SBC Executive Committee as well as by a panel from its Cooperative Program Committee — are “complementary” and will “help inform” one another.

“The issues behind [churches’] escrowing funds have risen to a level of prominence that justifies us taking a special look” at what is occurring, Rummage said.

Louisiana Baptists were among the first groups to formally raise questions relating to the most recent spate of controversies entangling SBC entities.

About a month later, Moore explained his missteps in a “Christmastime reflections” article in which he urged those he had belittled “to try to see where there are misunderstandings.”

He claimed there was only “one situation,” and in this single instance “pastors and friends” mistook his criticism of “a handful of Christian political operatives” as also including them.

“If that’s what you heard me say, that was not at all my intention, and I apologize,” he said. Now Moore is asking everyone to “take the time to understand and not caricature one another.”

But Moore’s about face apparently did not persuade Prestonwood Baptist Church members, or the congregation of First Baptist Church in Morristown, or the number of other churches who have contacted the SBC Executive Committee.

Likewise, at least some churches in the Louisiana Baptist Convention remain unconvinced.

“I am continuing to receive inquiries from Louisiana Baptists regarding their unhappiness with the ERLC and their thoughts about funding,” he said. “I have encouraged them to give us a few more weeks to study the matter.”

He also indicated there are concerns beyond just the insults Moore hurled at Christian individuals, groups and institutions.

“The question before Southern Baptists now is, ‘Does the ERLC share our convictions and thus deserve our financial support?'”​

By Don F. Mabry ALEXANDRIA, La. (LBM)-- The number of churches in our country constantly is changing and it is very difficult to acquire information from the various denominations, but estimates indicate that there are 330,000 Christian churches and congregations in the United States today. But the question … END_OF_DOCUMENT_TOKEN_TO_BE_REPLACED