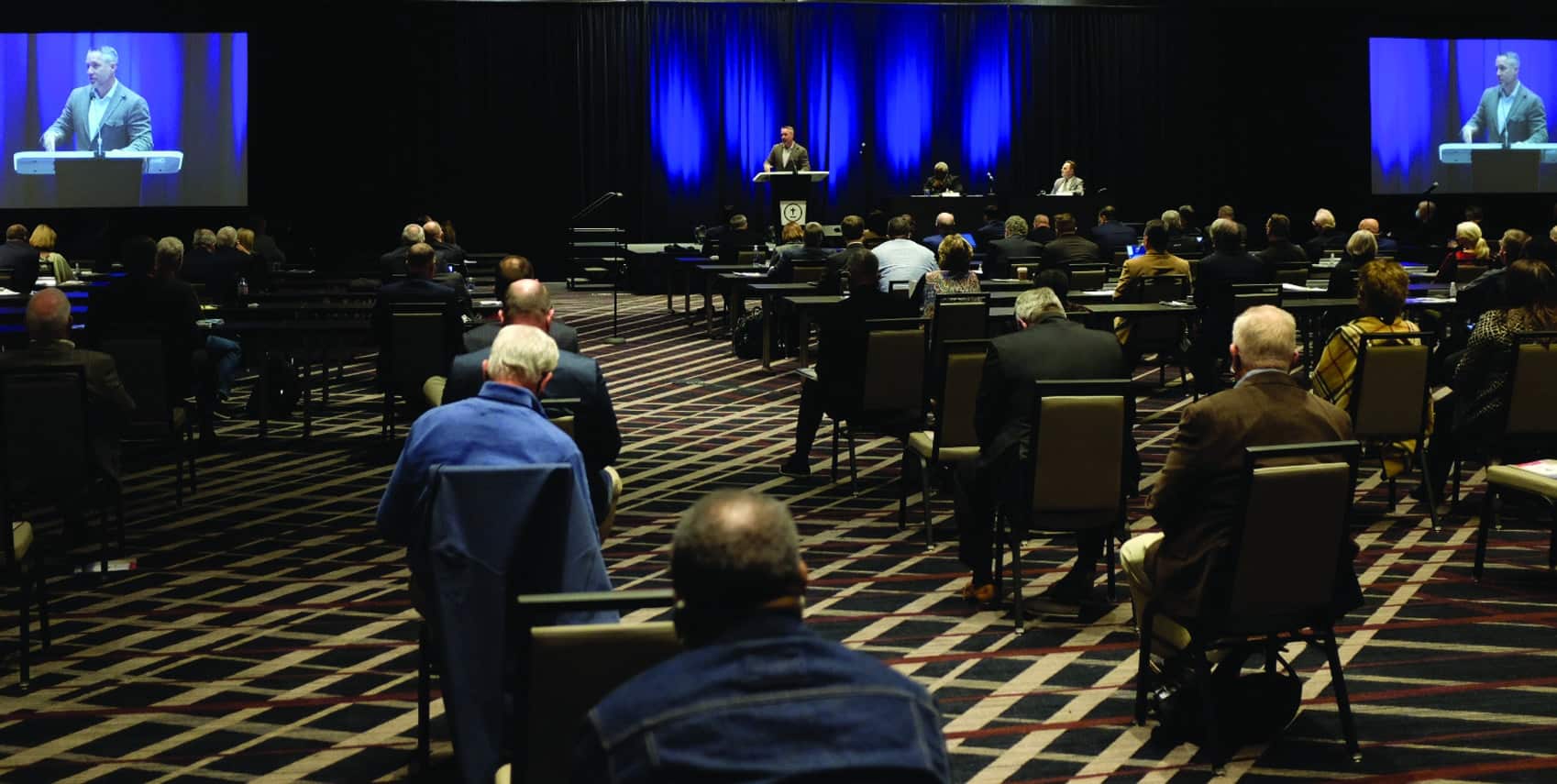 SBC President J.D. Greear addresses the plenary session of the SBC Executive Committee February 22. The meeting was held in a large hotel ballroom to allow for social distancing. Because of the COVID-19 pandemic, the committee had not met in person since last February. Kyle Cochran photo

NASHVILLE, Tenn. (LBM) —During executive session, Feb. 23, the Southern Baptist Convention’s Executive Committee voted to remove four churches reported by the Credentials Committee to be “no longer in friendly cooperation” with the SBC.

Meanwhile, the Executive Committee took no action against LifeWay regarding violation of SBC Bylaw 15.F. by a trustee but set up a task force in response to Southwestern Baptist Theological Seminary’s suspension of trustees elected by SBC messengers.

Towne View Baptist Church, Kennesaw, Georgia, and St. Matthews Baptist Church, Louisville, Kentucky, were removed from fellowship with the SBC for affirming homosexuality. TVBC voted to admit a male homosexual couple as members and SMBC was disfellowshipped by the Kentucky Baptist Convention in 2018 because the congregation supported the homosexual-affirming Cooperative Baptist Fellowship.

The decisions were announced in a plenary session the same day.

SBC messengers agreed to repurpose the Credentials Committee in 2019 as the permanent body to address any issue that might call into question a church’s relationship with the SBC according to Article III of the SBC Constitution.

The Committee on Missions and Ministry heard two reports regarding controversies about trustees elected by SBC messengers.

LifeWay trustee Jimmy Scroggins, pastor of the Family Church, formerly the First Baptist Church, in West Palm Beach, Florida, was serving as trustee chairman when he was the only trustee to approve a one-year, $1 million “retirement” salary for former LifeWay CEO Thom Rainer.

Lifeway, the $500 million publishing arm of the Southern Baptist Convention, experienced eight consecutive years of multiple million-dollar losses prior to Rainer announcing in 2017 his intention to resign in 2018. He stayed in leadership through February 2019, the month before the announced closing of all 170 LifeWay bookstores. A Baptist Press analysis of LifeWay’s 2010-2017 audits showed “total operating expenses exceeded sales,” growing in deficit each year from $2.3 million to $35.5 million.

The $1 million deal was slated to run through October 2021.

Meanwhile, Scroggins, a trustee since 2014, began receiving book deals from LifeWay in 2015, with his third work to hit the shelves in 2021, according to a LifeWay online ad.

The SBC EC Committee on Missions and Ministry heard LifeWay’s lawyers deny any conflict of interest because such allowances are made in LifeWay’s bylaws. But lawyers for the SBC were absent and so SBC EC members were not able to challenge whether the behavior was a violation according to SBC governing documents — given that Scroggins was elected by SBC messengers.

SBC Bylaw 15.F. states that no person or that person’s spouse may serve as a trustee of an entity “from which the person receives, directly or indirectly, any form of payment or financial benefit” except reimbursement for reasonable expenses authorized for serving as a trustee.

In a Baptist Press report about LifeWay’s Jan. 26 online trustee meeting, the findings of a LifeWay special audit committee were cited as claiming “that all advance monies and royalties from Scroggins’s books going back to 2015 have gone to his church and not to him personally.”

Meanwhile, the SBC Executive Committee established a task force to examine whether an entity can suspend an SBC elected trustee, which was described as removing the trustees.

The SBC is the sole member of each of its respective entities.

The action was taken because of a dispute with Southwestern Baptist Theological Seminary regarding the treatment of two trustees.

The school settled a lawsuit, Feb 8, which resulted in the two trustees resigning. But beforehand, the trustees were suspended because of alleged “misconduct.”

According to a Baptist Press report, in exchanges of letters, SBC attorneys argued that only messengers to an SBC annual meeting can take such action, and SWBTS pushed back that the action was allowed in the seminary’s bylaws and accused the SBC EC of overreach in its pursuit of the matter on behalf of the SBC.

The discussion during the SBC EC’s Committee on Missions and Ministries meeting was equally spirited.

In the end, the issue with SWBTS was declared moot by the SBC EC CMM chairman because the two trustees had resigned. However, during the plenary session that followed, the task force was announced and assigned the mission to study whether an entity can suspend any SBC trustee without permission of SBC messengers during an annual meeting.

By Don F. Mabry ALEXANDRIA, La. (LBM)-- The number of churches in our country constantly is changing and it is very difficult to acquire information from the various denominations, but estimates indicate that there are 330,000 Christian churches and congregations in the United States today. But the question … END_OF_DOCUMENT_TOKEN_TO_BE_REPLACED